It’s been a couple of years since I’ve driven the refreshed Audi Q7 and it was great to be back relaxing in the extremely comfortable driver’s seat gazing around at the tremendously stylish interior. Not a lot has changed and that’s mostly a good thing…..why fix it if it ain’t broke…..including the Audi’s trusty 3.0-liter supercharged V6. It makes  333 hp at 5,500-6,000 rpm and 325 lb-ft @ 2,900.  Mated to a super smooth eight-speed Tiptronic transmission, which sends power through Audi’s Quattro all-wheel drive system to whichever wheel needs it, it all works seamlessly.

The base engine is a 2.0-liter turbo I4 putting out 252 horsepower and 273 pound-feet of torque, mated to standard all-wheel drive and an eight-speed automatic transmission. It’s enough get this 4,938 lb crossover going along quite nicely but splash for the V6, if you want more fun.

The Q7 still looks fresh and modern and only distinguishes itself from its smaller Q3 and Q5 siblings brothers by being larger, it’s part of a family after all. It’s cheaper than I expected in Premium Plus trim, coming in at $68,600 from a base price of 56,400. If I were buying one this is the trim I’d choose, the Prestige starts to get pricey with its fancy Valcona Leather and Bang & Olufsen sound system. The main question is how is it as a daily driver? 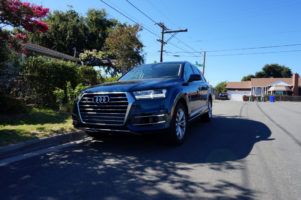 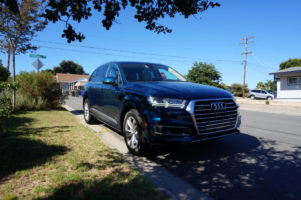 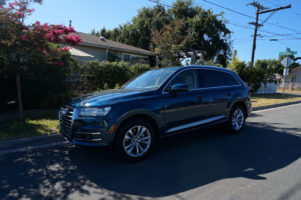 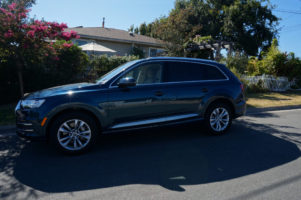 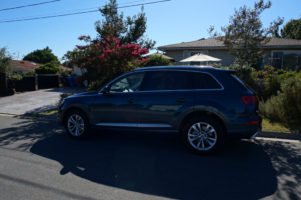 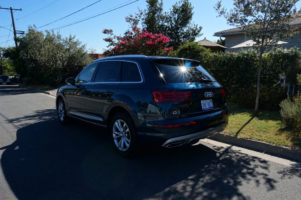 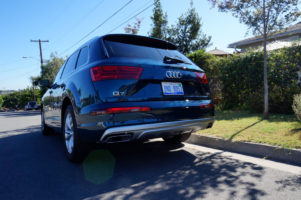 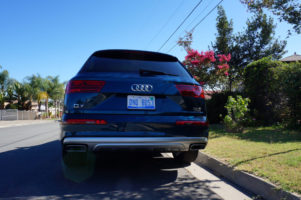 As expected the Audi Q7 3.0T is a very nice place to spend time in whether you’re commuting or on a road trip, it’s agile going around corners and composed on the highway. Driving at full chat it’s all very competent with excellent body control and plenty of grip and if you should become somewhat over eager it stays firm and its only at the limit that under steer kicks in. It does feel like a sporty wagon instead of a seven-seat crossover. It corners pretty flat and the engine has plenty of power to push on to the next bend and beyond. Fast sweepers are favored instead of really tight turns as the Audi still weighs almost 5,000 lb, but give it a tricky bend and the Audi remains composed and still surefooted.

As with many Audi’s the Q7 come equipped with Audi Drive Select controller giving you Auto, Comfort, Dynamic, Off road, and Individual. It’s not really an off-roader, but it’ll manage moderate truck trails without a problem and  there’s a self-locking center diff if things get slippy.

With our Vbox set up it took a few different launches to get a solid 0-60 time. We tried traction control off and then on, and the best we could achieve was 6.0 seconds, almost the identical to our last tester  conservative with performance claims. Top speed is limited in the US to 130 mph based on tires. I kept the steering in Comfort mode using the individual settings, as I find it gives the most feedback, which is not much, but better than none.

The Audi Q7 is loaded with driver aides and for the most part we turned them off. Lane keeping assist pulls the car back into the lane if you forget to use the turn signals, but we find it a bit annoying.  The road sign recognition system is a great feature as long as you don’t use it with cruise control. If you do the car applies the brakes once it detects a change in the posted speed limit, which is unnerving the first time. Finally the traffic assist system will accelerate, brake and turn with traffic at speeds of up to 37 mph, and it worked pretty well. Keep your hands on the wheel or it gets quite upset. 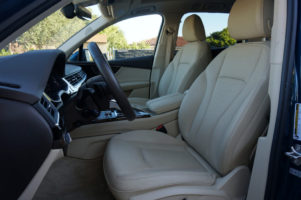 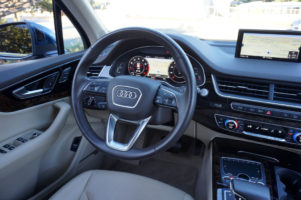 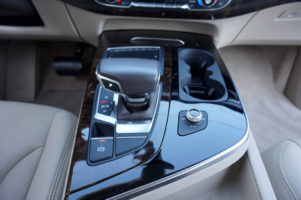 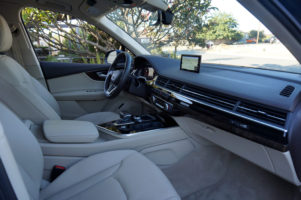 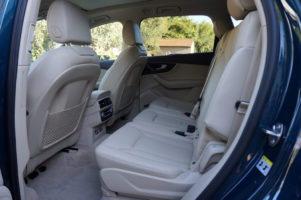 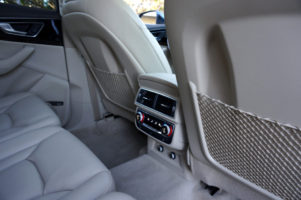 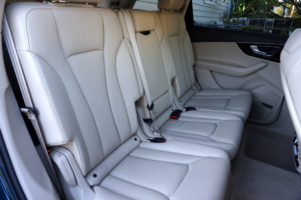 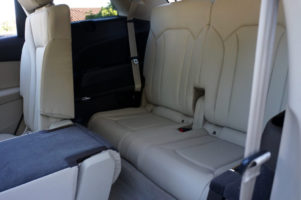 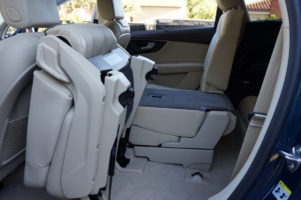 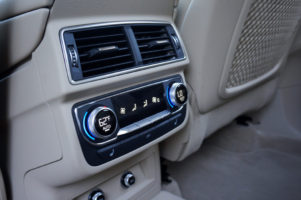 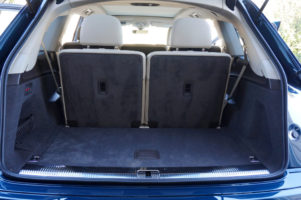 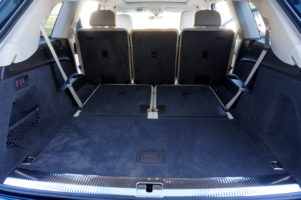 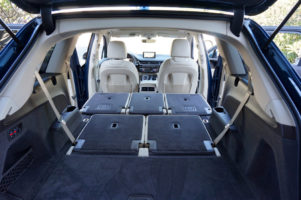 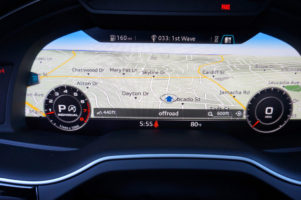 Audi still makes some of the best interiors out there and this one certainly keeps that tradition alive. My car had the $4,000 Premium Plus Package which comes standard with navigation, Apple CarPlay Android Auto and a wide variety of connected features like weather, traffic and even local events. Audi’s MMI infotainment system is very thorough, and while it’s easy to get lost in the menus, navigation is painless thanks to a sensible dial and touch-pad combination. Handwriting recognition lets you write out addresses, however, I found it distracting so didn’t use it much.

Virtual Cockpit looks fantastic and mirrors the infotainment system on a configurable gauge cluster screen in front of the driver. It’s super easy to use, thanks to straightforward steering wheel controls. My biggest gripe is one that isn’t exclusive to the Q7. There are only two USB ports inside the car, and they’re both located under the front row’s center armrest. Unless you have extra-long cables handy, rear-seat occupants will have to make do with a pair of 12-volt outlets. This is a miss in an almost $70K car. Also the rear seats are somewhat cramped, OK for kids but 2 full size adults might need a few rest stops on a long trip. That said if you fold the 2nd row flat you get acres of cargo space.

Glad to see Audi has added Apple CarPlay, making it much easier to enjoy music while you drive. I used the cable connection every time but Bluetooth works as well. The interior makes it feel like you are piloting an aircraft especially the gear selector and mouse wheel. We didn’t try the Navigation as we tend to prefer using a smart phone, but I am sure it works like the usual Audi systems.

A couple of possible annoyances, for people with bigger families, the rearmost seats are a bit of a squeeze and normal sized adults would have great difficulty getting in and out. Fold them down though and you have a nice large cargo area suitable for a Great Dane or some luggage. We had difficulty getting 3 dogs in the SQ5 but this one is much larger. Also if you allow adults free range of the HVAC controls in the middle seats and they leave the fan setting on high you get an annoying buzz in your ear from the air vents in the B post. I had to scramble into the back to turn them down. There’s no way to control them from the driver’s seat save for utilizing the lock out buttons which prevents them from using the controls at all.

Don’t go checking too many options unless you really need them, the Premium Plus trim is perfect for me. If you need a 7 seat luxury crossover the Audi Q7 is a very good choice, it rides smoothly, has ample power when needed, and although I did pay for having a heavy right foot at the pump averaging only 16.9 mpg for the week, I had a lot of fun. My drives aren’t typical and I see no reason not to get close to the EPA 25 mpg on the highway.