I think I know now what it’s like to pilot the Queen Mary II cruise liner after spending a week with the all-new 2021 Chevrolet Tahoe 4WD. In the world of full-size SUVs, the Tahoe and Suburban have been growing in stature in every new iteration since they first appeared and this new one is no exception. The Tahoe now boasts virtually the same interior space as the outgoing Suburban, a vehicle that you could already see from space.

Almost everything, the new Tahoe is 7 inches longer than its predecessor, has a longer wheelbase (4.9-inch gain) which provides much better ride quality and increased passenger comfort. That interior space now offers 25.5 ft³, 72.6 ft³ with 3rd-row folder, 122.9 ft³ with 2nd row folded, it’s cavernous. Add to that 3rd-row passengers are no longer an afterthought, they now get extra legroom. I’ll be honest if you decided to live off the grid, there’s more space in this than a bedsit in London.

This extra space came from one very important upgrade, adding independent rear suspension which is a lot more compact than the old leaf-sprung solid rear axle. It costs a lot of money but since Ford adopted this a few years ago GM really had no choice.

Outside the Tahoe has been given a new look and it makes the car look more aggressive. I especially like the grille and the front lights and the 4 exhaust pipes sticking out at the back, instead of hidden under the bumper. It’s a modern take on what is essentially a box on wheels, and I think it works.

My 4wd tester in Premier trim had $4,485 worth of options on top of its base price of $65,600 taking the total price to $71,380 including destination. It can get quite pricey. The Premium Package includes a Power Panoramic Sunroof, Adaptive Cruise Control, Enhanced Emergency Braking, Rear Pedestrian Alert, Rear Camera Mirror, and Washer, Head-up Display, HD Surround Vision, Trailer Brake Controller with Advanced Trailering System and an Enhanced Cooling Radiator.

There are 3 engine choices, the standard, 5.3-liter V8 with 355 horsepower and 383 pound-feet of torque is somewhat underpowered for me, (but does now offer Dynamic Fuel Management) the 420-hp, the 6.2-liter V8 which will spend a lot of time at the pump, and by far the best choice is the excellent 3.0-liter DOHC I-6 Turbo-Diesel, which I drove during a short test in the 2021 Suburban. 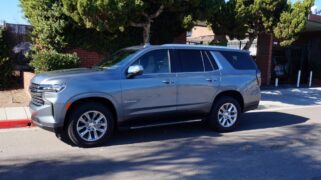 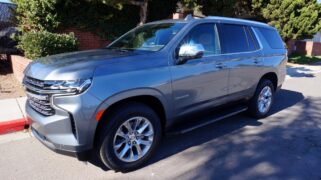 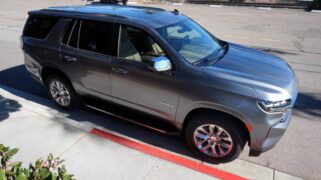 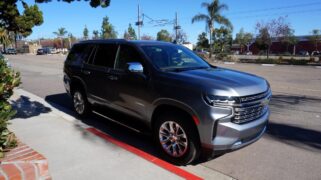 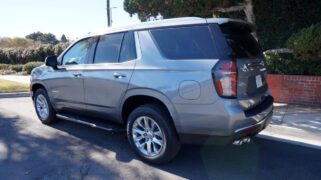 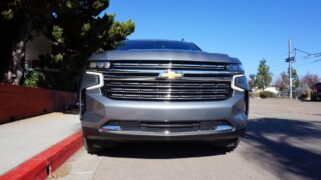 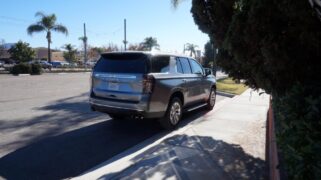 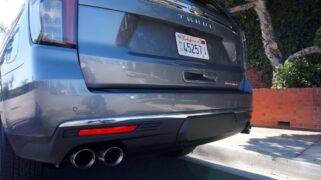 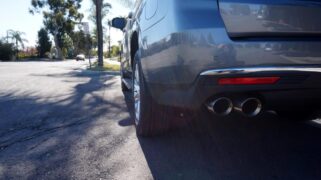 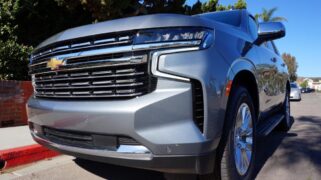 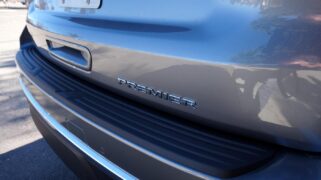 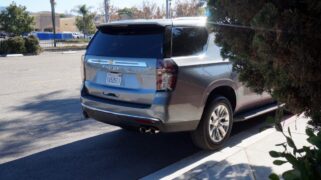 Exceeding expectations on the road

Piloting a vehicle this size in tight spaces is no mean feat, but the all-new Tahoe manages to defy its sheer mass by being quite light on its feet, rather like an elephant doing ballet. I was surprised how well it goes, especially since I took it on my usual road course including twisty mountain roads. The suspension is well sorted and a vast improvement over the outgoing model, it turns with relatively little body roll and feels composed and precise.

Over broken pavement the suspension irons out bumps and is extremely impressive and in only rare situations do you get that judder typical in body-on-frame vehicles, but the bumps have to be quite severe. The steering is not overly light and is reasonably direct, it goes where you point it, and the brakes are reassuringly solid, stopping the beast with no complaints.

The 10-speed transmission is a gem, with seamlessly smooth shifts, there’s no hunting for ratios and GM seems to have the knack of programming it perfectly for any engine it’s mated with, something you can’t say with Ford’s version. 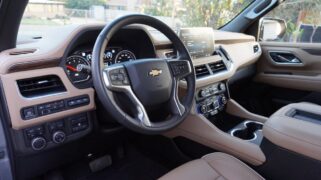 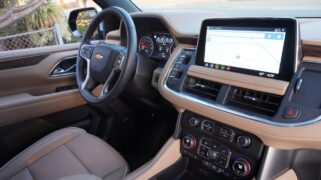 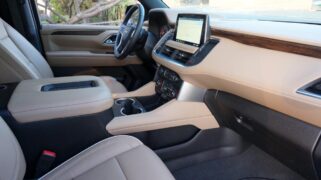 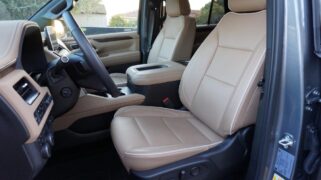 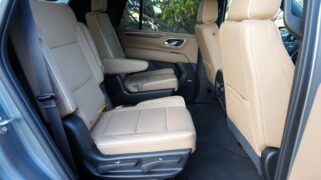 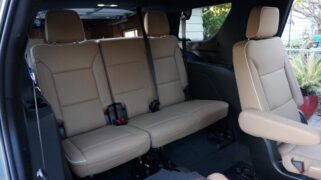 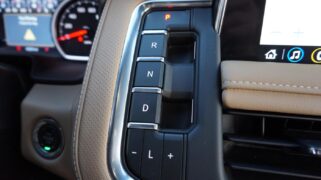 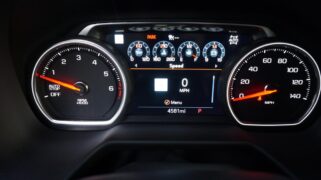 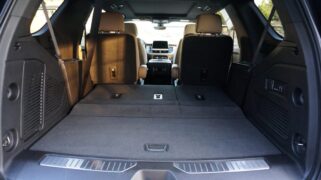 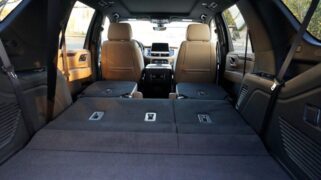 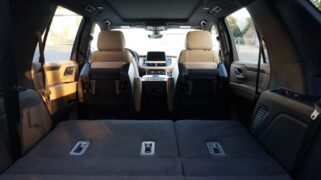 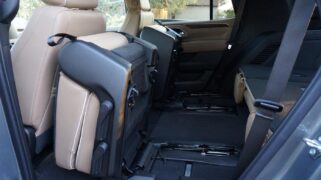 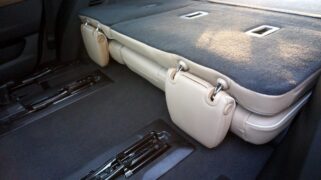 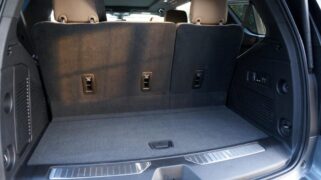 Aside from the fantastic Turbo-Diesel engine, the biggest and best improvements in the 2021 Chevrolet Tahoe are found on the inside. GM has made great strides in making the interior more appealing and aside from a couple of things they have succeeded.
The infotainment screen has been modernized and is now suspended and integrated into a sculpted new dash. Gone is the hidden cubby behind the screen and instead a small sliding door to the right of the screen hides a smaller cubby to hide stuff. The infotainment system is superb, it’s quick and intuitive to use and big enough to not fat finger the menu buttons, which are usefully large. As you would expect these days Apple CarPlay and Android Auto both come as standard across the range.
It did take me a while to get used to the push-pull buttons that control the transmission on the dash, but I prefer this to the old antique column shifter. Physical switches and buttons are everywhere to duplicate what you can do on the touchscreen. I like buttons but this may be too many, however, they are in the right place and easy to read at a glance.
The front seats are very somewhat comfortable, but I did find them a touch hard and flat with little side bolstering. From the driver’s seat, you get a commanding view of the road ahead and you’ll notice that everything is tightly assembled and very intuitively laid out. The cabin materials are solid and feel to be of decent quality and you have to look hard to find any scratchy plastics.
Cubby space is very generous as it should be, the Tahoe’s center-console bin is huge and there are a bunch of other pockets and nooks as well as cup holders front and rear for all passengers.

The Tahoe very large inside and depending on seat options can seat up to 9 people, however, my tester had 2nd-row captain’s chairs making entry into the 3rd row more accessible. This is great for people but if you have dogs, they can simply stroll through the gap in between the second row. I would suggest a 2nd-row bench for the pooches.

The second row is very spacious, it’s easy to adjust the seats, they simply fold down and tip forward in one fluid motion.  The 3rd row is good for adults now and it even has a power fold button accessible from behind to make life easier.

With both rows of rear seats folded, you get more than 122 ft³ of cargo space more than I could ever use and the load area is completely flat, which reminds me it’s time for a trip to Home Depot.

The new Tahoe is unquestionably a much better vehicle now that it has more space than before and a much better interior. It’s also a class leader in the ride and handling department, the new rear suspension does wonders for its composure over any road surface.

I would option Turbo Diesel instead of the V8, simply because it’s the best engine for this vehicle. There are some misses inside, the main instrument panel in front of the driver could use a better design and the seats are a tad flat and hard for my liking, but overall the new Tahoe does impress me.