They say there’s a fine line between genius and madness and in the case of McLaren Automotive, the genius is there to behold in the 2020 McLaren 720S Spider. Mclaren was extremely generous in lending me one for 4 days but with some limits, 250 miles per day, and no tracking. Since there are no tracks here in San Diego there was no danger of me breaking the rules, however, I may have broken the speed limit once or twice……….tongue firmly in cheek.

As a child, you follow rules, don’t eat too much cake or you’ll be sick, don’t stick your finger in the electrical outlet or you could die. With limits, you learn to enjoy more, and every mile becomes an adventure, which is exactly what happened in my long weekend romance with the 720S.

What’s behind your head?

It’s a 4.0-liter, twin-turbocharged V8 with 710 hp and 568 lb-ft mated to a 7-speed DSG with lightning-fast shifts. I must point out here that there are a number of cars that I’ve driven with north of 600 hp, the Audi RS7, the Cadillac CTS-V, but none have been quite as light as the 720S which comes in at a featherweight 3,236lbs. That’s like putting a 300hp Mercury outboard on a kayak, although in the McLaren’s case a hell of a lot more engineering was involved.

There’s carbon fiber everywhere and the occupants are cocooned inside a super-stiff carbon-fiber tub, the Monocage II-S, which has been re-engineered for convertible use. The changes were necessary to incorporate a new carbon rear section behind the seats so the roof has somewhere to store.

The roof itself is a thing of beauty and is opened and closed using electric motors instead of hydraulics, so it’s much quieter. The top can be opened at up to 31 mph and it takes only 11 seconds to complete. 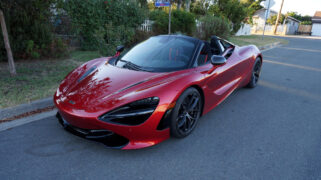 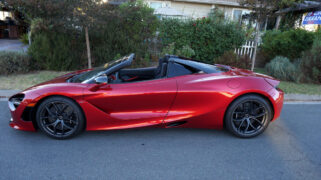 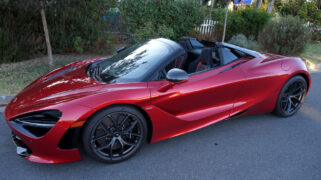 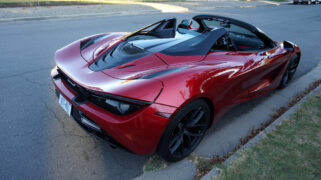 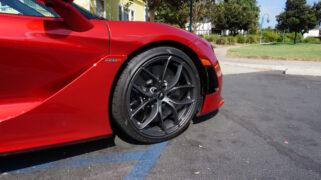 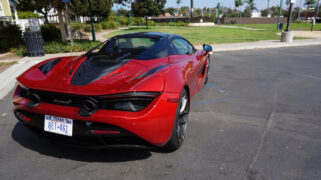 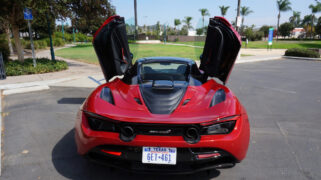 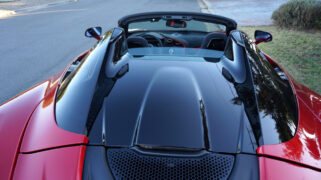 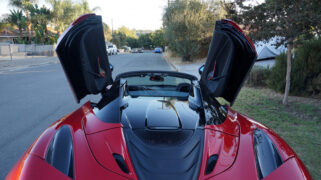 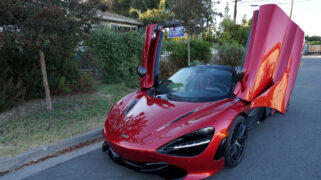 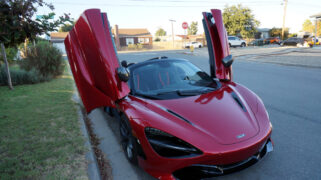 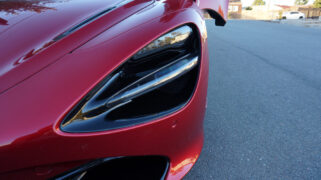 How is it to drive?

This is where the madness comes in, it’s simply bonkers fast. Some cars may be quicker to 60 mph but after that, the 720S leaves them in the dust. Even at mid-revs, the throttle response is staggering, the power delivery virtually instantaneous and it’s all so controllable, you can get a little sideways, but the car brings you back online. It’s positively grin-inducing.

Most of the time I didn’t need to use the full rev-range, squeezing past traffic on a two-lane highway you simply stretch your ankle and 2 or 3 cars can be passed. Push the gas pedal down to the carpet and all hell breaks loose and it pushes you into the seat as the car launches towards the horizon at license losing speeds.

The steering is the best of any car in my opinion, the rack isn’t super quick it just feels so natural and relaxed and best of all utterly communicative. You know exactly what the front wheels are doing, helped by a very cab-forward driving position since there’s not much car in front of your feet.

CHECK OUT THE VIDEO

It’s not just fast it’s pretty damn good looking too, it looks amazing from all angles, top-up or down, and because of this it gets a lot of attention. Every time I drove anywhere people would stare, take pictures, or ask me questions, how fast is it? how much is it? A simple trip to the grocery store was an event, people took photos of me putting a loaf of bread in the frunk. I even went to Walgreens to get a flu shot and a crowd had gathered around the car when I came out.

The brakes do take a bit of getting used to, a firm push is required, especially when moving from Reverse to Drive, normally a light pressure on the pedal is all you need but in the 720S it beeps at you and a message appears telling you to apply more pressure. Once the correct pressure has been applied the brakes are fantastic as they should be given the performance the car has.

Even though you sit quite low with the sensation your bum is scraping the tarmac, the visibility is very good even with the top up and all-round visibility with the top down is perfect, unlike some other cars I have driven. It makes the McLaren 720S spider easy to live with including negotiating speed bumps since you can raise and lower the front with a button on the right-hand stalk. Of course, you must remember to use it, or you’ll hear a nasty scraping sound which is the founder Ron Dennis grinding his teeth. 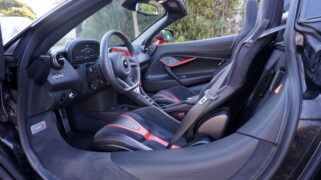 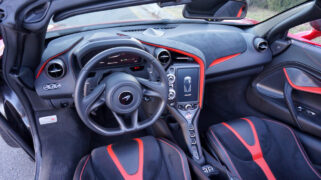 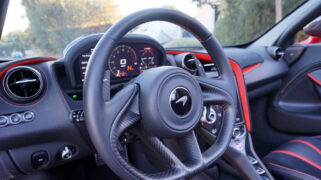 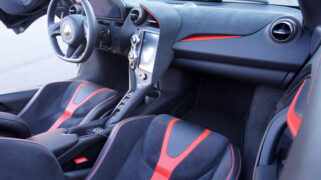 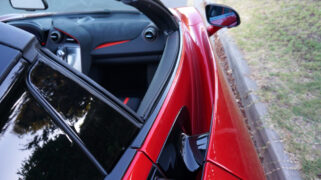 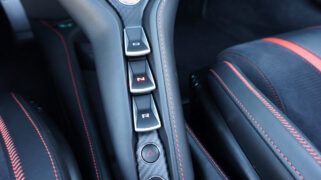 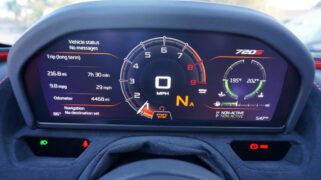 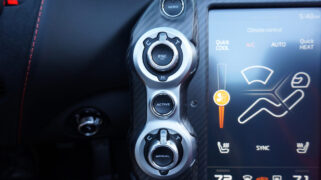 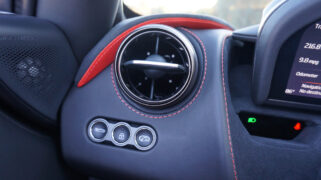 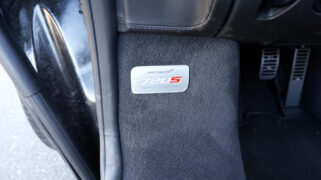 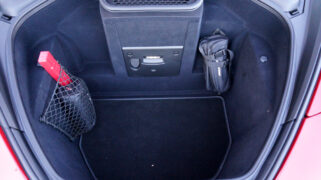 Like a Rolex watch, you wear the McLaren, like a finely tailored suit, but it’s not for folks that are too tall or of ample girth. The cabin is airy but it’s also snug and once you have opened the beautifully crafted scissor door, you negotiate a wide sill and a narrow pedal box before getting settling into the excellently comfortable seats.

There’s some storage space in the center console suitable for a wallet or a mobile phone but don’t look for a place to put your Gucci gloves because there isn’t a glove box. All that stuff can be stored in the frunk which is pretty spacious and holds 5 cubic feet of stuff. The rear tonneau can be raised using the buttons under the driver’s door and this offers a small and flat space to store items. You do have to remember to remove the items if you want to lower the roof since that’s where the roof stores itself.

Controls for the driver fall easily to hand, however, there is no shifter just 3 buttons, P, D, and R. Park doesn’t exist you just have to select N and not forget to apply the parking brake. There’s nothing more embarrassing than your McLaren rolling down your driveway.

The folding driving display is a delight and is operated by a button to the right of the steering column, push this and the instrument binnacle rotates to show a slimline version with current gear, speed, and engine RPMs — and that’s it.

My tester had the optional Electrochromic glass roof panel ($9,100) which at the press of a button darkens to reduce light penetration by 90 percent. Fabulous and expensive.

The only real gripe I have are the seat controls which are located to the right and beneath the seat under the memory seat buttons. Firstly, you can’t see the controls, so you have to feel for them and adjust the seat by trial and error. I tried to use the Force but that didn’t work either. A good 20 mins later I finally got them set. This really should be easier.

McLaren engineers in their relentless pursuit of performance have produced a masterpiece, it’s blisteringly quick, exquisitely balanced, with perfect steering weight, brake balance, and throttle response, to provide the driver with supreme levels of confidence. It’s so easy to drive around town, it purrs like a kitten, but is thoroughly ferocious when you want it to be.

As a Brit, it makes me proud that we can make cars like this considering our somewhat dodgy manufacturing past. For a company like McLaren to hit the ground running in a really short time against the likes of Ferrari is incredible. I’ll probably never drive a car as good as this…….unless, of course, McLaren lends me a 765LT.