I went to the 2020 Chevrolet Corvette C8 launch way back in 2019 and I was expecting to get to drive one fairly shortly after that, however, 2020 and the pandemic happened. At long last loan cars have recently become available so Chevy was able to deliver me a 2020 Chevrolet Corvette Stingray LT1 in Elkhart Lake Blue. They had previously delivered a red LT3 model one, but someone had left the dipstick out and after a brief spirited drive, oil was sprayed all over the engine and Chevy thought it best to swap it out.

Winding the clock back, Chevrolet has been talking about building a mid-engine Corvette for years, but it took until the eighth generation for it to actually happen.  From the outside, the new C8 looks radically different from the C7 since the engine is now mounted amidships, now it looks like a Ferrari….stunning from all angles!

The venerable 6.2-liter V8 paired with the new Tremec eight-speed dual-clutch is a perfect match and is fed using a dry-sump, the advantage of which is it helps avoid engine oil starvation while driving at speed. Chevrolet claims the LT2 can handle 1.25 g sustained lateral accelerations in any direction. 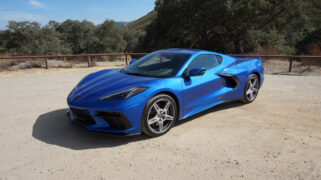 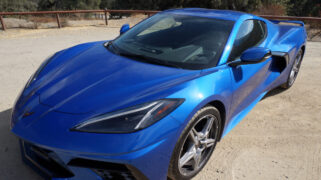 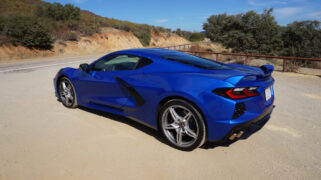 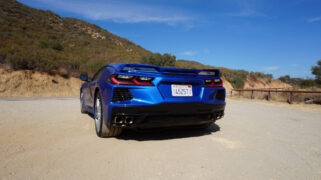 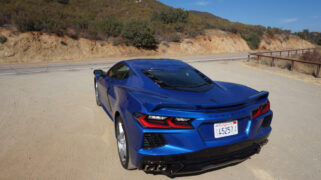 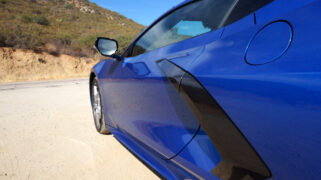 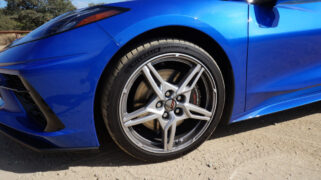 First impressions are that the C8 seems much less brutish than the C7, gone is the angry snarl and its demeanor is quiet and serene, however, play around with the Drive Modes, and it moves into supercar territory. A button on the right of the steering wheel selects Z Mode, which turns on your pre-configured settings which can be set from the infotainment screen.

There you can customize powertrain settings for the engine, transmission, steering, and brake feel beyond the presets in the other drive programs, which are Tour, Sport, and Track. The button is super handy since you can set the mode to Tour to appease passengers or if you are taking a trip to Vegas, and then once you are on your own, select Z and all hell breaks loose.

The C8 cuts into corners like a race car, the faster you go, the better the C8 feels and its cornering limits are virtually out of reach on public roads. True, steering feedback isn’t as good as some, but you’ll be grinning too much to notice. The comparisons between the C7 and the C8 are like chalk and cheese, whereas the C7 is brutish and somewhat unwieldy with a wild mix of under and oversteer, the C8 glides along extremely rapidly with extreme composure, the 8-speed banging off lightning-fast shifts as you go.

All the controls are easy to use and light to the touch, the drive by wire brakes are very responsive and have a decent pedal feel all while delivering excellent fuel economy. For the week I had, I averaged 15.1 but on longer trips, I was seeing over 20 mpg.

In its driving behavior, you can summarize that the C8 has better handling, is significantly faster, quieter, safer, and much easier to live with than the outgoing C7, and is in my opinion one of the best GT cars you can buy. 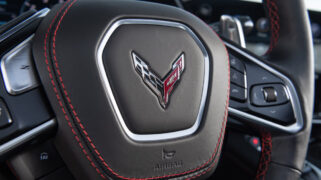 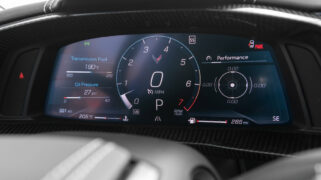 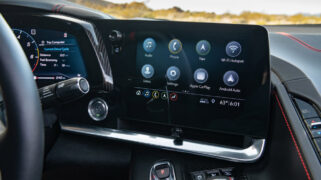 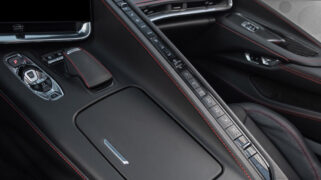 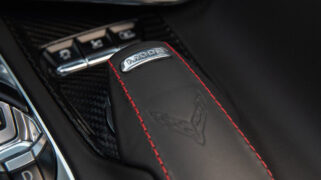 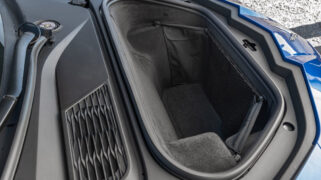 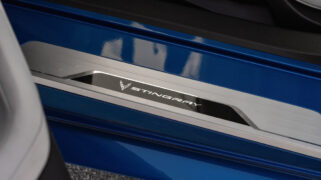 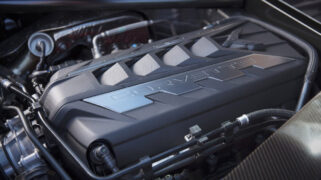 As the driver of the C8, the cabin/cockpit is an extremely nice place to be and the quality of the materials is second to none, which is a huge improvement over the C7. Ahead of the driver is a configurable dash that has all relevant info in easy to read and modern-looking graphics. The only miss really is the wall of HVAC switches that separate you from the passenger. It’s not the look of it but the utility since it’s hard to find the button you need with them all in a row and the passenger can easily turn on the driver’s heated seat with a resting left arm.

The odd-shaped steering wheel, which is squared off at the top as well as at the bottom seems normal after about 5 minutes and actually gives you a clearer look at the instruments and more legroom down below.

My tester came with the Competition Sport Bucket Seats ($1,995) which are very comfortable but not for those of ample girth since hip room is tight.  My 5-foot 8 inches frame fit easily but for those who have had too many carbs, you’ll find getting in and out somewhat of a challenge. They are covered in a hard-wearing cloth material which should last many track laps as well as carbon fiber and leather accents. The downside to these is there’s no seat heating or cooling.

There are three seat options in the C8: GT1, GT2 (which are included in the 3LT trim), and the aforementioned and more aggressive Competition Sport buckets in my tester.  I tried out the GT2 seats briefly and they were very good, covered in soft leather and supportive while providing plenty of bolstering.

The C8 has a decent amount of cargo space if you combine the frunk and rear cargo area together you get 12.6 cubic feet of space, a bit less than the C7 but very good for a car of this configuration. The rear cargo area does fit a golf bag if you like long walks hitting small white balls with a stick, a mantra that Chevy has always tried to accommodate. The hidden buttons to open both are also pretty cool.

As in most mid-engine cars, the C8 Corvette has no active safety equipment no matter which of the 3 trims you choose. The safety feature is you!

This was probably one of the most hyped and anticipated cars of all time and it’s really hard sometimes to match those expectations with reality, but the C8 Corvette does just that. In Z51 specification nothing comes close to the performance for this kind of money. Even a loaded LT3 is around $85K, a Porsche 911 starts at $99K and it’s still not as fast as this.

The C8 is one of the best performance cars I have driven, period, it has a unique character, sounds fantastic and Chevy has absolutely blown away the competition with this car.