Audi used to sell some of the best wagons in the U.S, but unfortunately the trend shifted to SUVs since they are regulated as light trucks instead of passenger vehicles under CAFE. This distinction effectively killed the wagon here……but not quite……Audi still has one left in its lineup here, the 2017 Audi A4 allroad. I personally love wagons, they have all the handling and performance characteristics of a good sedan along with the ability to carry a bunch of extra stuff, like your granny’s antique dresser. Some people have become used to the higher seating position that the SUV offers but that requires additional engineering, more weight, worse fuel economy and way less fun.
The Audi allroad sold just 3,500 last year and that’s a pretty low number, but Audi says it’s simply a low-volume vehicle with a limited target audience. As long as they keep making a wagon for US consumption I will be happy, well kind of, I would really like to see the RS6 Avant Performance edition make it here………keep dreaming.Our 2017 Moonlight Blue Audi A4 allroad tester arrived in Prestige spec so was loaded to the roof rails with goodies. Even the roof rails look posh. The exterior has seen some minor changes and is a good-looking car. The large shield grille continues up front, with LED running lamps and smooth lines toward the horizontal taillights, the sloping rear lines put it a few notches above the slightly ungainly Subaru Outback.
Like previous A4 allroad models, our tester came equipped with a 2.0-liter turbocharged I-4 mated to a seven-speed dual-clutch automatic transmission and Quattro all-wheel-drive system. That engine is virtually identical to the one in the 2017 A4 sedan, making 252 hp and 272 lb-ft of torque.That’s up on the outgoing model which had 220 hp and 258lb-ft. which helps as it weighs roughly 150 pounds more than an all-wheel-drive A4 sedan. With our test gear attached we launched it to 60 mph in 5.57 seconds and the all important 50-70 mph took only 2.98 seconds. Consider that an Audi Q5, which has pretty similar interior space takes almost a second longer to hit sixty. 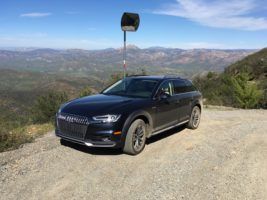 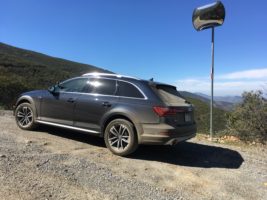 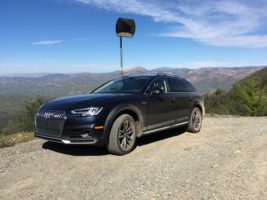 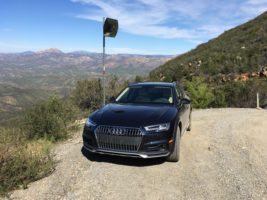 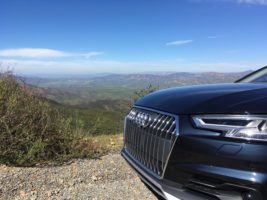 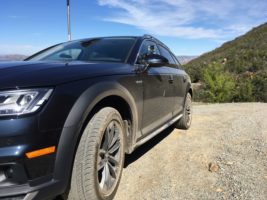 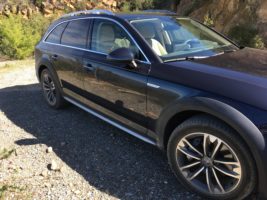 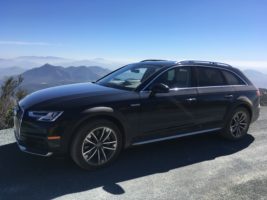 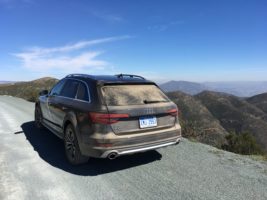 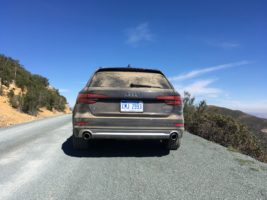 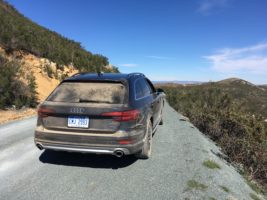 How Does It Go?

On and off road I like the allroad a lot. The new engine has much more torque and it gives the car plenty of power for passing. I also like the new seven-speed dual-clutch transmission, with that extra ratio it makes for even smoother progress. I only tried Sport mode for a short time then settled into Individual so everything in Sport except steering. With that set up there was no need to knock the lever back to Sport, such is the ample torque low down from this 2.0T. From a standstill the allroad launches fast thanks to the Quattro system. Even in the recent storms in San Diego we couldn’t get the wheels to slip, even mashing the pedal into the carpet. In spite of a slightly raised suspension, the allroad still handles well. Body movement is controlled when taking turns, and I threw it into some tight turns with no under steer apparent.

To really test its off road chops though, I headed to Otay Mountain truck trail, a half dirt, half decomposed granite road that winds its way 15 miles to the summit. It’s not too challenging of a road and to be honest a 2 wheel drive car could make it, but with the allroad it does snow, dirt, mud and limited rough terrain, including some pretty good sized ruts that I encountered. Keeping Audi’s Drive Select system in “Off-road” mode for this portion of the test softens up the new adaptive dampers, making progress more comfortable over the rough terrain. I made it to the transmission towers at the top and although the car was somewhat dusty, it had been a very enjoyable trip.

The allroad is the first to offer the revised Quattro all-wheel-drive system. The system can essentially decouple the rear differential and prop shaft from the driveline when not needed. It can also fully lock and vary the amount of drive to the rear wheels and from left to right, depending on conditions. It learns from the driver. So now, effectively the Quattro is now a front-wheel drive-based system which replaces the permanent 60:40 rear/front all-wheel drive system for which Audi has been known. No need to fret as I mentioned earlier this does not produce any noticeable under steer.

The A4 allroad’s cabin is nothing short of luxurious, which is no surprise as it has the same DNA as the A4. Our tester car, being a Prestige model, came with Audi’s virtual cockpit screen, and it’s brilliant. I spent hours fiddling with it, changing the resolution, switching out the ambient lighting, blue one day , red the next.  The MMI infotainment system comes with Apple Car Play and Android Auto, and the smart phone integration schemes work just as well as in other cars. The only issue I have is that smart phone interfaces are typically touch screen and every time my phone screen appeared I wanted to touch the screen to select. As is usual all interior finishes are of a very high quality.

Seats are very comfortable for both driver and passenger, although I wish Audi would offer passenger seat height, especially on the Prestige trim. Cargo capacity is 24.2 ft³, 58.5 ft³ with seat area and this translates into decent comfort for two 75 lb dogs, albeit with limited headroom.

The only thing that gives me slight concern is the price tag, which starts at $44,000 (The Q5 starts at 40K), but if you are a hard core wagon fan that difference is well worth it. Go crazy with the add-ons like Technology package which gives you the stunning virtual cockpit ($3,250); the Premium Plus Package, which gets you things like the upgraded sound system, LED headlights and the parking system ($3,000); and the Driver Assistance Package ($1,800) for adaptive cruise, and the price heads North of $50K.  The Prestige (Our Tester) package runs $7,400 and includes stuff from the Technology Package and the Premium Plus Package, along with the acoustic glass, which works great and keeps the cabin beautifully serene. Our car came out to be a slightly eye watering $55,575………..but I really think it’s worth it. Come the day when my Subaru Outback bites the dust, this Audi allroad is on my wish list and it should be on yours.