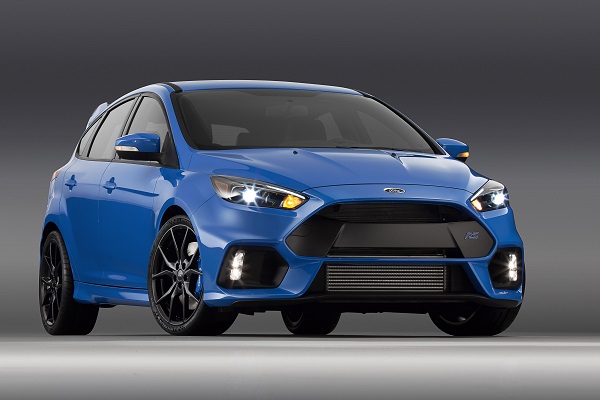 Let the horsepower wars begin as we reveal that the new Ford Focus RS will make a staggering 345 horsepower from its 2.3-liter EcoBoost four-cylinder. Step aside the Volkswagen Golf R the Subaru WRX STI, but not the Mercedes CLA45 AMG which pips the Ford with 355 hp and the Audi RS3 which is the current most powerful hatch with 362 hp.

Also confirmed is the RS’s torque number figure, which is  325 lb-ft between 2000 and 4500 rpm. An overboost function allows for a maximum of 347 lb-ft for up to 15 seconds when the driver’s right foot is buried into the carpet.

Every Ford Focus RS will use a a six-speed manual transmission (with a shorter lever than that of the ST) and the clutch and transmission have been uprated to cope with the higher levels of torque. The brand new all-wheel-drive system designed specifically to give the car new levels of performance and driver involvement.The first major innovation is the new electronically controlled twin-clutch four-wheel drive system. An excitingly named ‘drift mode’ function allows up to 70 per cent of power to be sent to the rear wheels, with as much as 100 per cent of that sent to one individual wheel.
To improve fuel economy Auto stop/start will also be standard and the CO2 emissions are said to be down by about 20 percent compared to the previous Focus RS.

RS Getting Ready for the Goodwood Festival of Speed

The engine was taken from the Mustang EcoBoost, which uses the same 2.3-liter to make 310 horsepower and 320 lb-ft although fitted longitudinally in the engine bay. The recipe for more power in the RS is a larger turbo compressor, a larger inter-cooler, a freer-flowing intake, and a bigger-diameter performance exhaust system with an active valve in the tailpipe. Lets hope those twin exhausts will give out some decent noise instead of the favored fake sounds that are all too common these days.

To keep all this power under control you will be able option 19inch wheels can be clad in Michelin’s Pilot Sport Cup 2 tires. As standard they will be wrapped in Pilot Super Sports.

This Focus RS will be the first to be available all around the world, great news for us here in the US. It is also the first RS sold here. For that reason the styling has been toned down a bit from the previous model from six years ago. Unfortunately the Liquid Blue color in our media photos is only for the show model. Paints that will be on offer are Nitrous Blue, Stealth Grey, Absolute Black and Frozen White.

So far there has been no official word on price or a release date.

Competition is pretty stiff, especially in Europe where they have access to more cars than us. Power also isn’t everything and we have no idea how these specs will translate into performance figures considering there is no dual clutch auto option. Anyway we will have to wait and see.