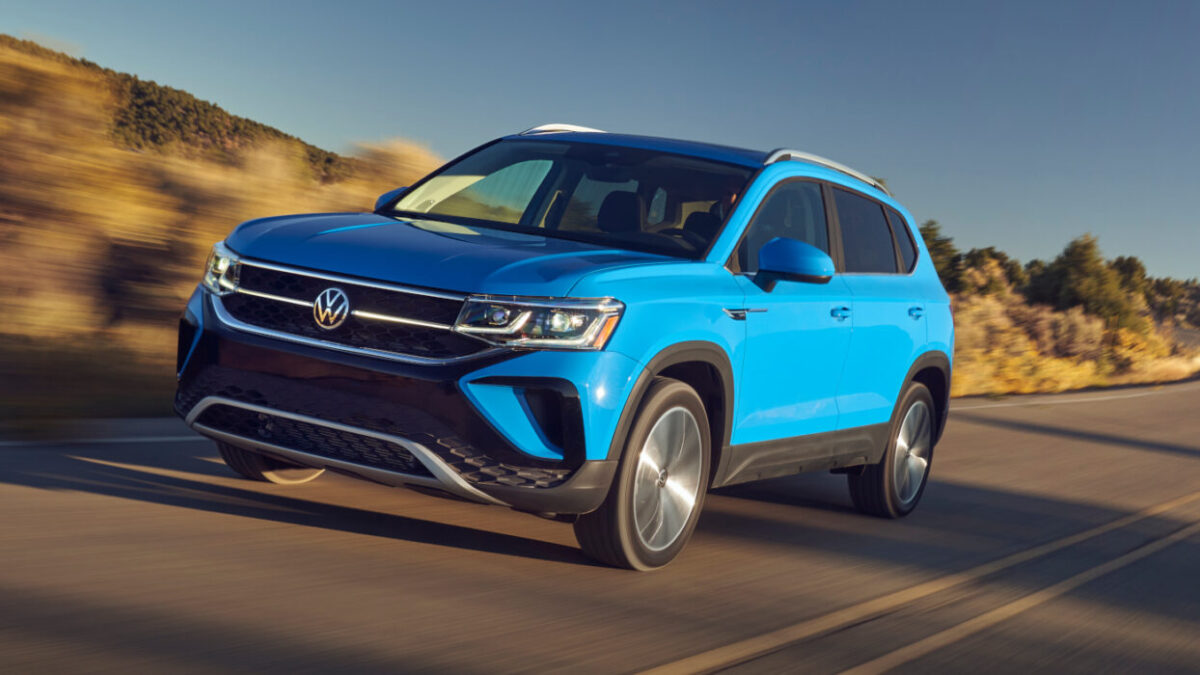 I’m a big fan of small cars and I especially liked the Golf Sportwagon until sadly it was discontinued which left something of a void in the VW US market lineup, that is, until now. Enter the 2022 Volkswagen Taos SEL FWD, which is not a replacement for the Sportwagon but as a crossover in the very popular subcompact space, and it’s now in the firing line of the likes of the Jeep Compass, Kia Seltos, and Subaru Crosstrek. Luckily as it turns out the not so little Taos is a compelling crossover.

Viewed from the outside the Taos is a good looker and has better proportions than the Tiguan. At the rear, it gets a full-width running light bar like the one on the new ID 4 electric and the model badge sits in the middle of the rear tailgate, which is fast becoming a trend.

Its overhangs are short and I think the overall proportions of the Taos are great, VW has done a great job with this one.  The only negatives are the fake exhaust outlets at the rear, instead, VW chose to hide the real outlets under the bumper. Why?

Powering the 2022 Volkswagen Taos SEL is a brand new 1.5-liter version of the turbocharged inline-four that is used to power the VW Jetta which in the Taos produces 158 hp. It has a new variable-geometry turbocharger, which allows the engine to not only rev to its redline of 6,400 rpm but also gives it a decent 184 pound-feet of torque, from just 1,750 rpm.

My tester was a front-wheel-drive model so the engine was paired with a conventional eight-speed automatic transmission. If you opt for the all-wheel-drive version you get a seven-speed dual-clutch automatic, which VW says gives it more spirited performance.

There are some other differences between the two drivetrains, the front-wheel-drive Taos gets a torsion beam at the rear, while the all-wheel-drive model enjoys a more sophisticated multilink setup. We haven’t driven the AWD version yet but the more sophisticated suspension has the advantage of greater body control and overall composure but adds an additional 255 lbs of weight, which is a lot for a 158 hp car.

My SEL tester came with VW’s IQ.Light LED matrix headlights which feature interactive light control that makes night-time driving safer and more comfortable. On high beams, they can project up to 500 meters.

Since my test car was a front-wheel-drive SEL model it was slightly difficult to launch, especially with the traction control off, however, we did manage a best 0-60 run of 7.6 seconds, which is quicker than its larger sibling the Tiguan. That’s in line with the sort of performance you would expect from other vehicles in this sector.

The good news is you won’t be spending too much time at the gas pump, which in turn will create less revenue to fix the roads, oh well, I guess you can’t have everything. Including testing and being always in Sport mode we still managed a very respectable 22.8 mpg for the week. EPA numbers say you could get 28 mpg in the city, 36 on the highway, and 31 mpg combined. 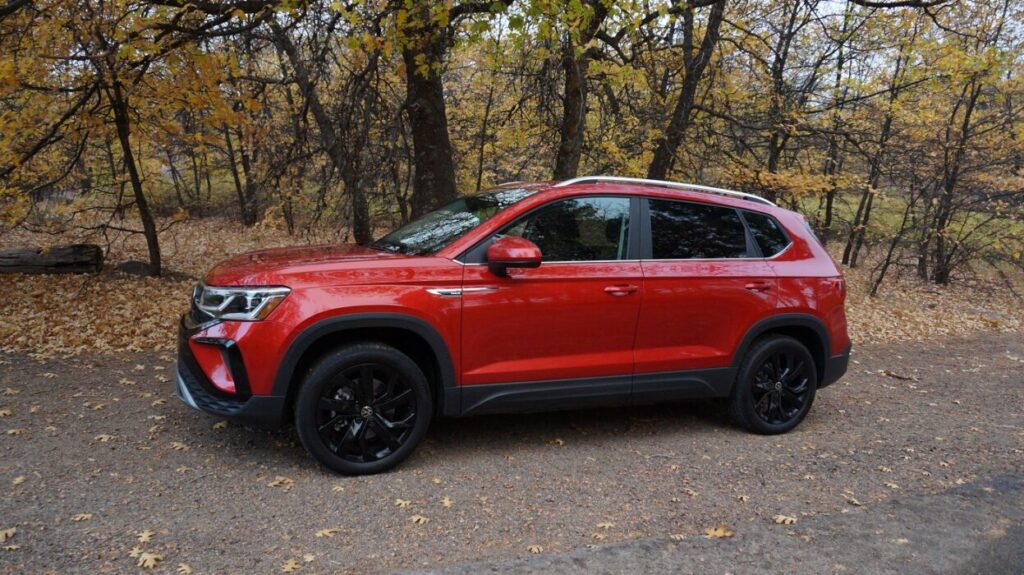 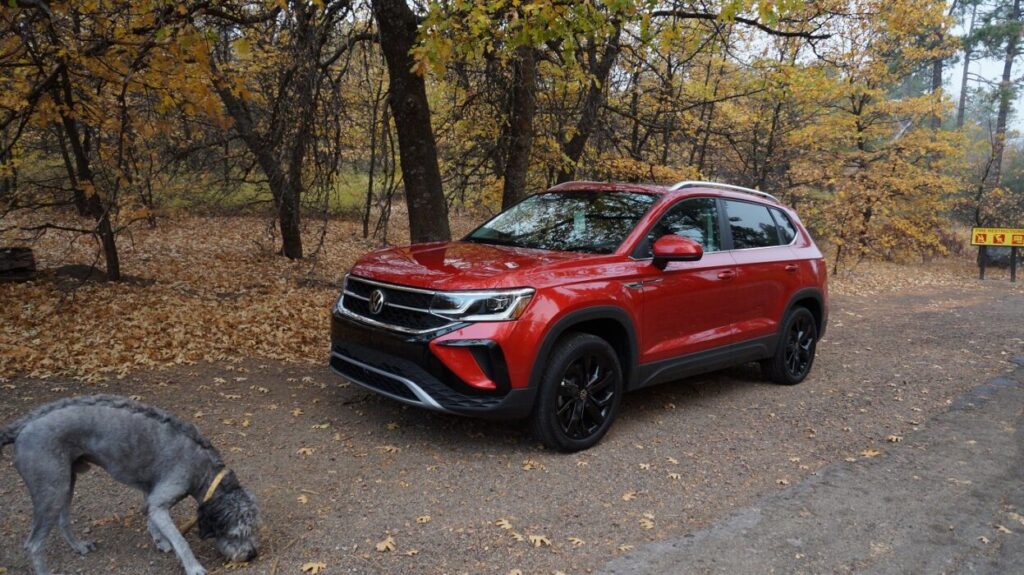 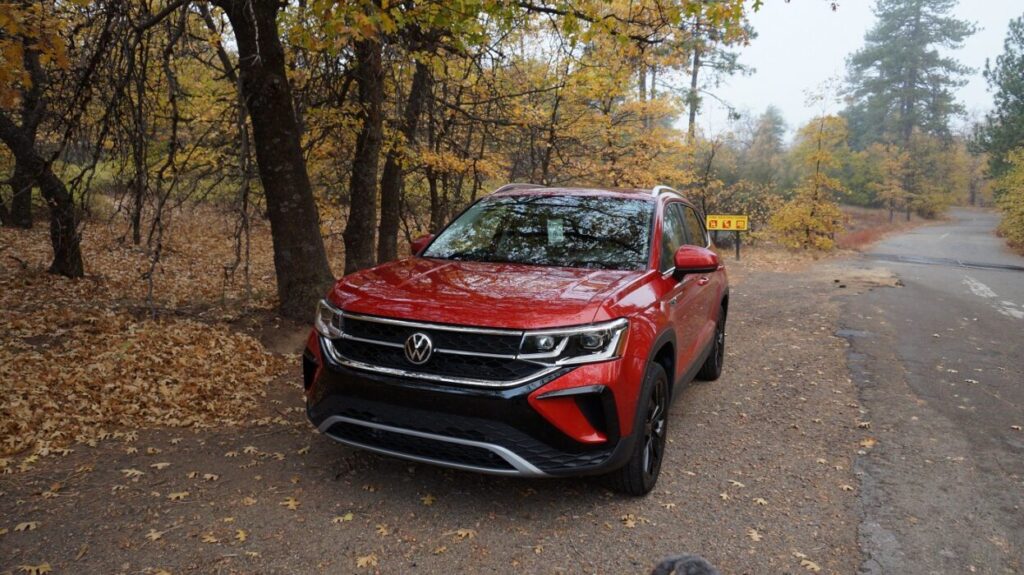 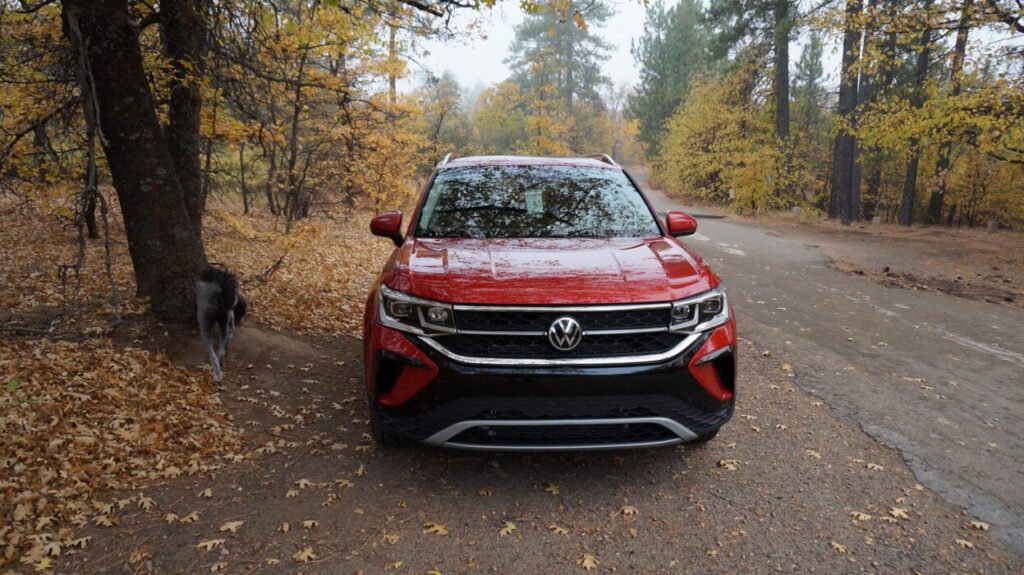 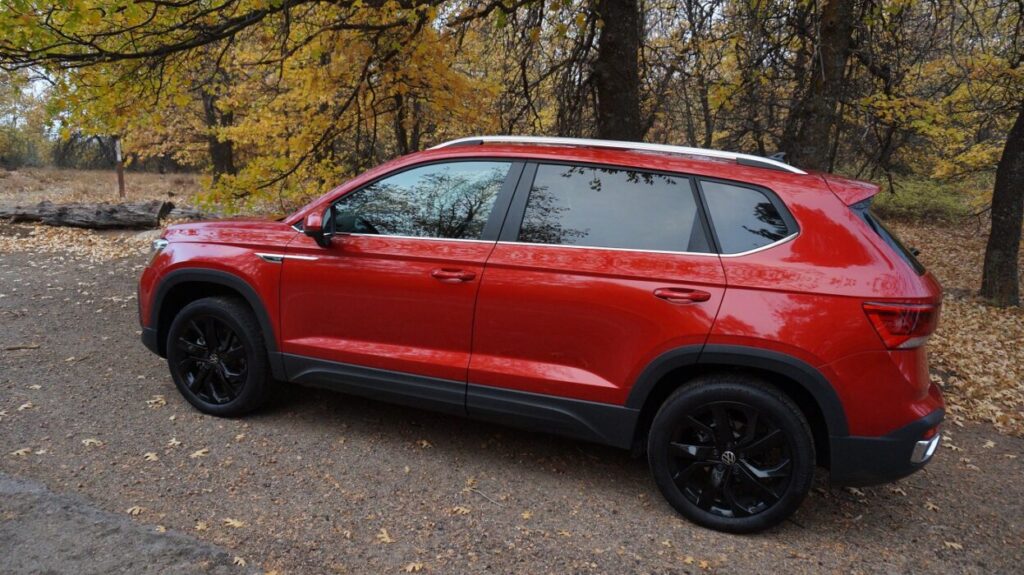 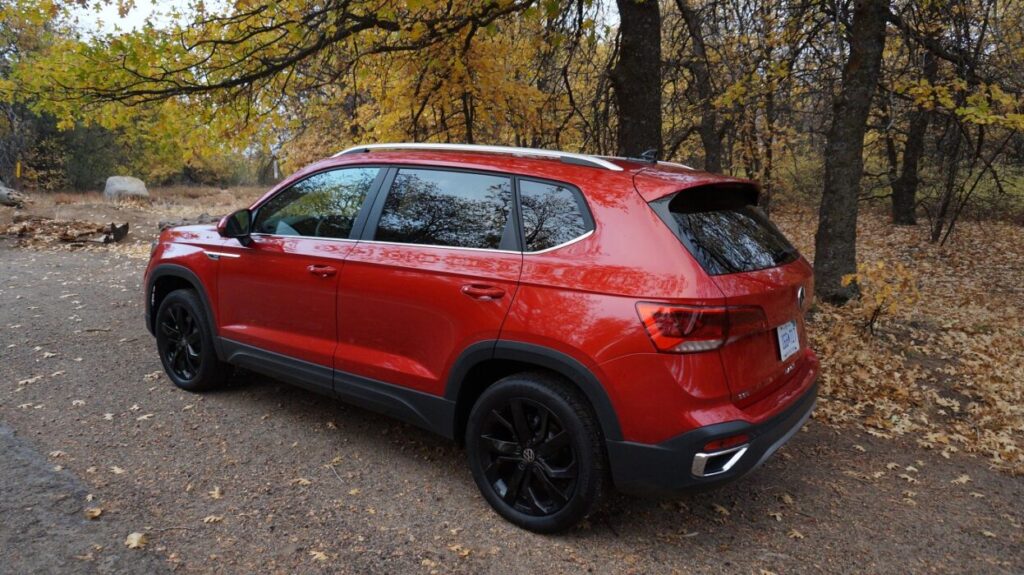 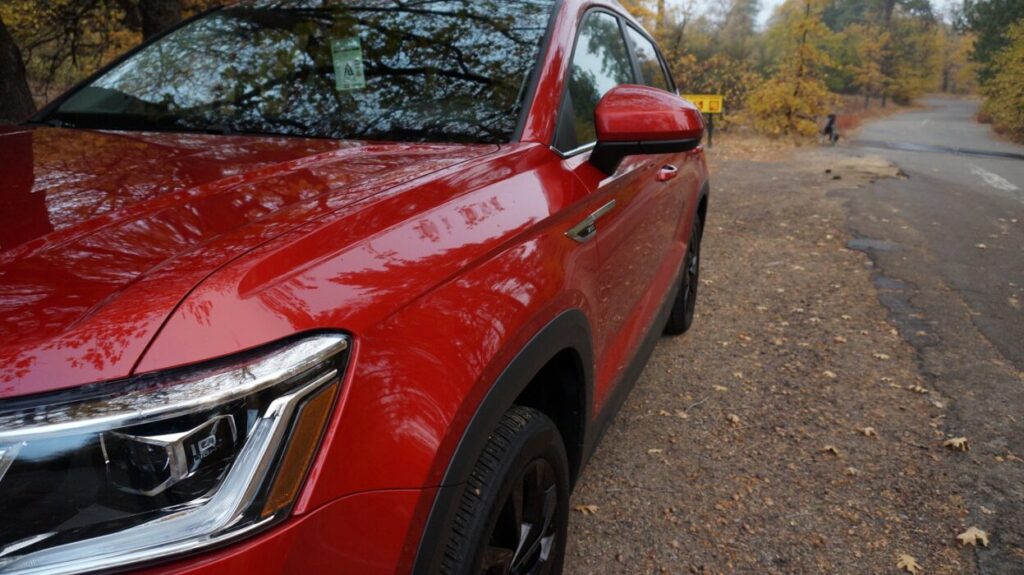 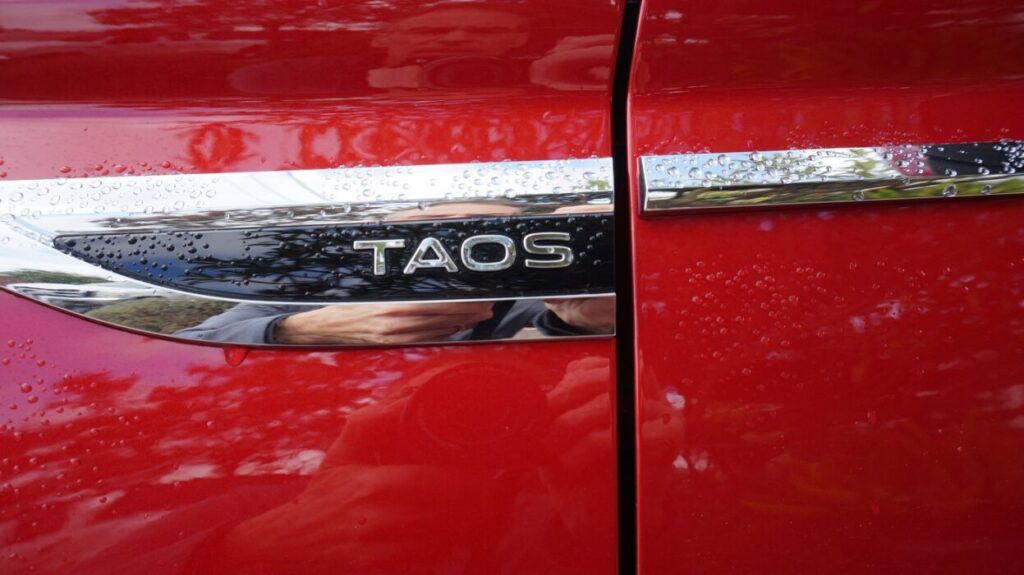 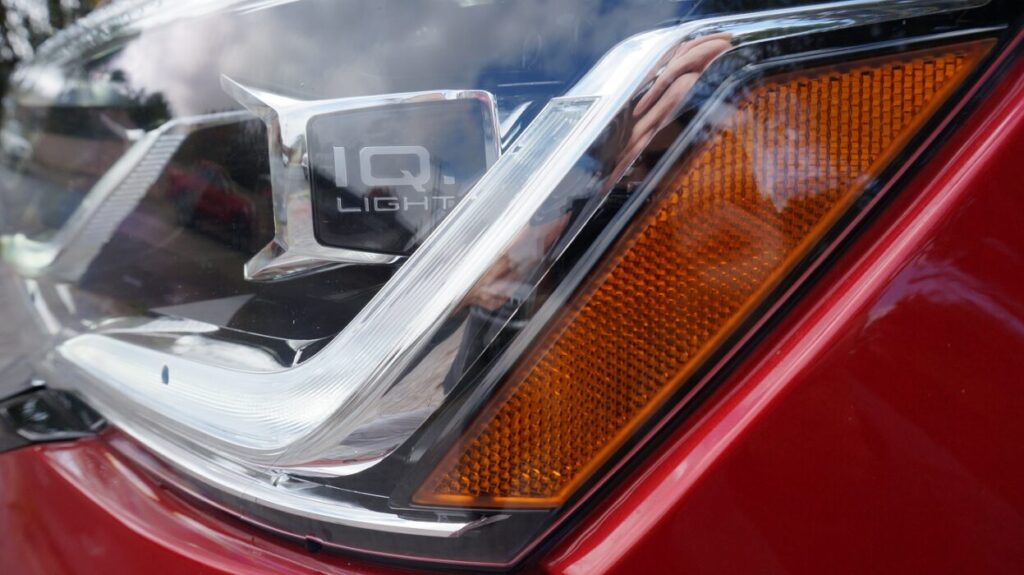 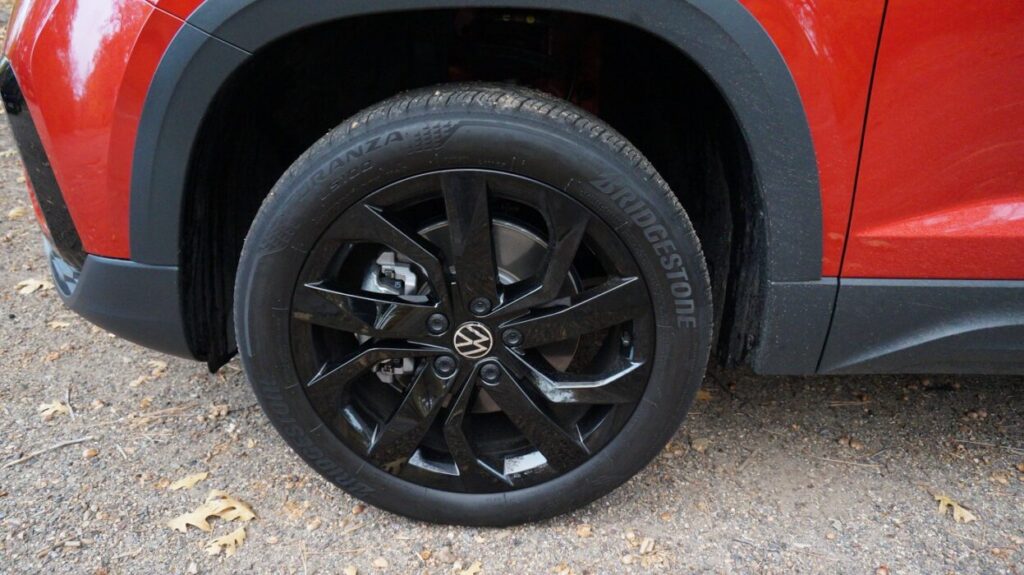 Versus the Tiguan which we felt could use more power, the little Taos feels quite zippy and FUN, there is a little body roll, but it’s generally well-composed, turns in very well and the steering is quick and well-weighted. It gets off the line with gusto, the turbo four exhibiting the slightest hint of lag before surging to the red line and grabbing another gear. The 8-speed auto pairs well and in Sport mode changes down when told to do so, no fuss, no bother.

Brakes feel good underfoot and the pedal is easy to modulate when coming to a stop, no lurching heads for passengers here. My Taos SEL tester rolled on 18-inch wheels (17s are standard, 19s are optional), wrapped with Bridgestone Turanza all-season tires, not usually my favorite but they were grippy and provided a decent ride. 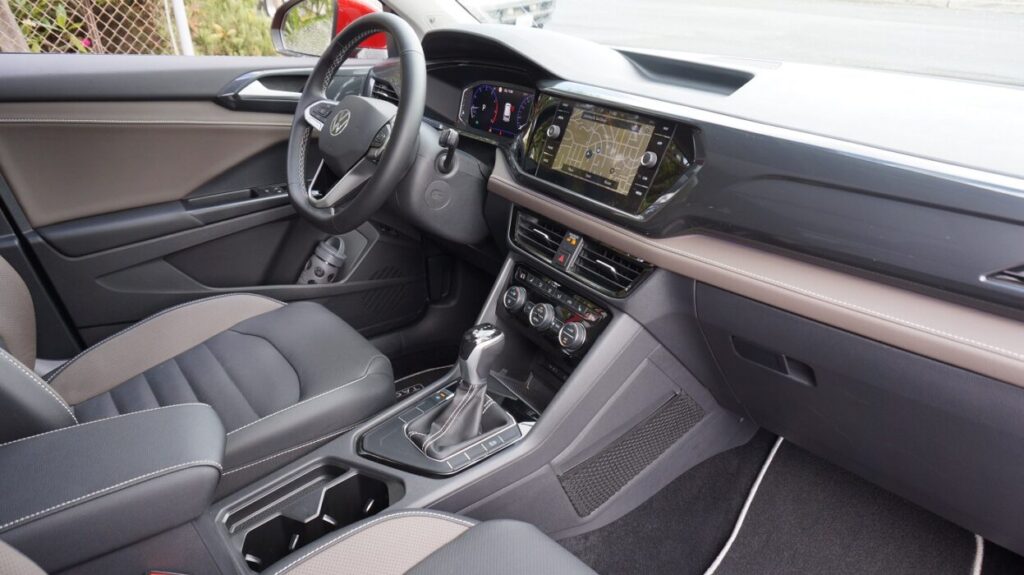 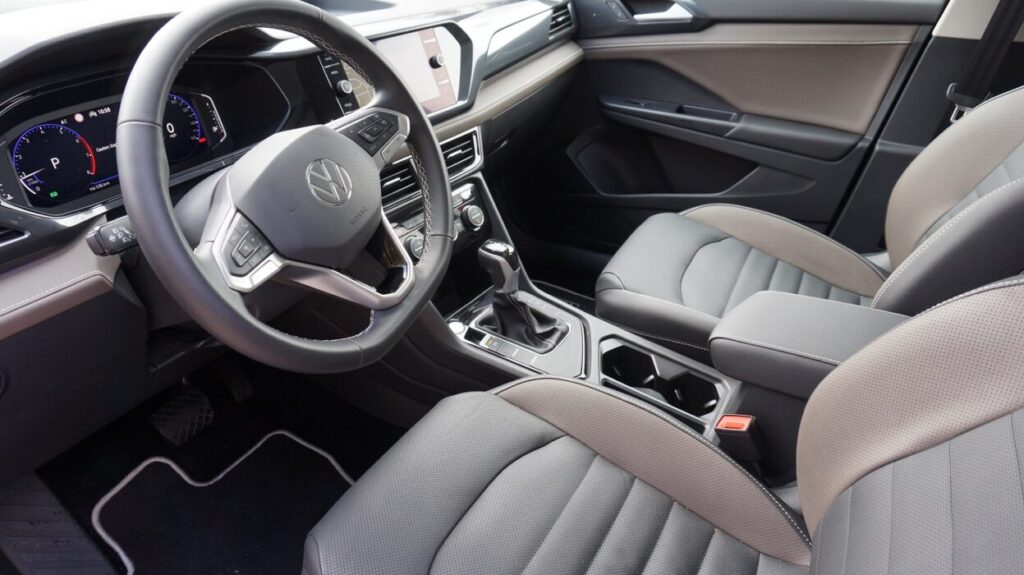 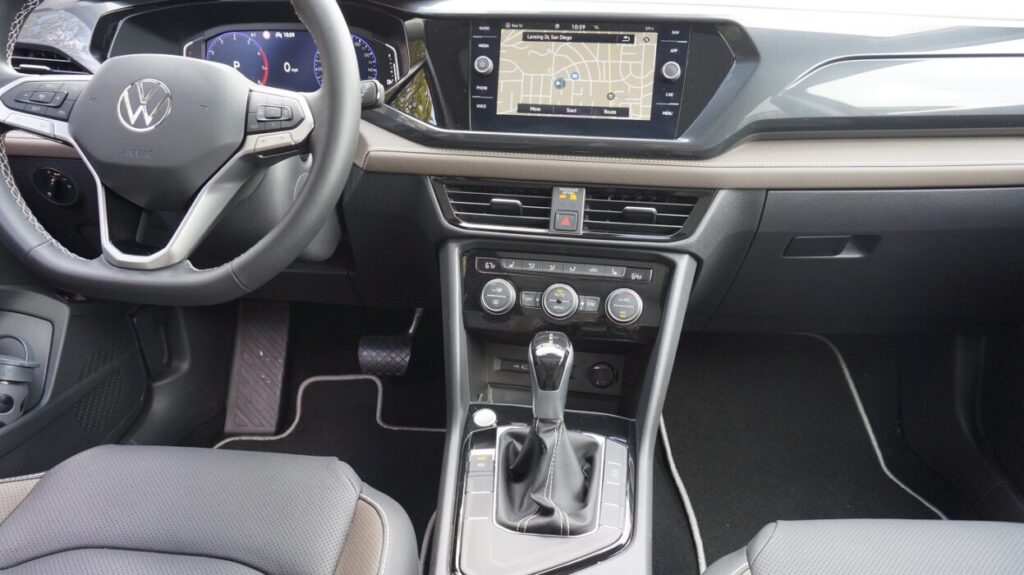 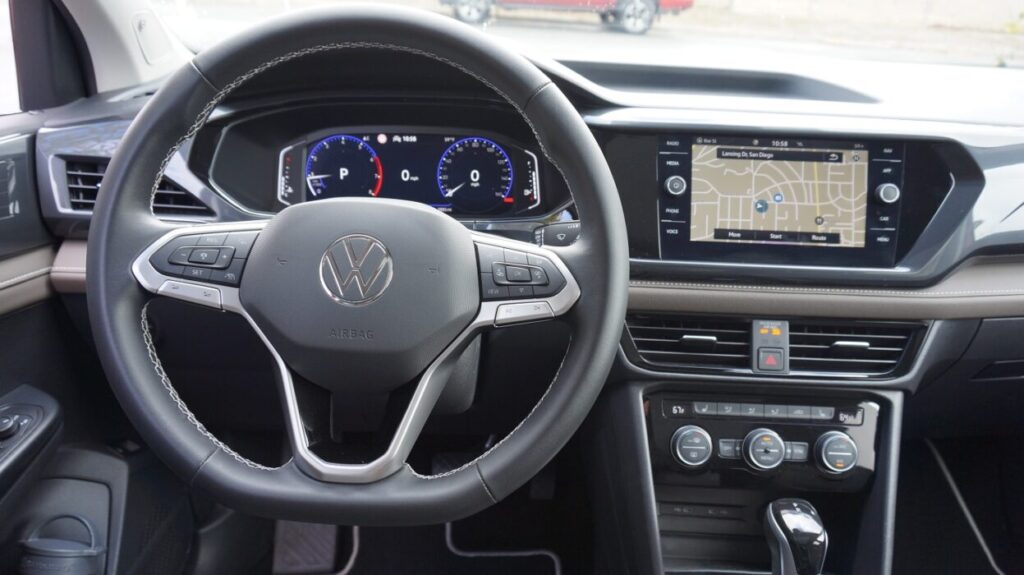 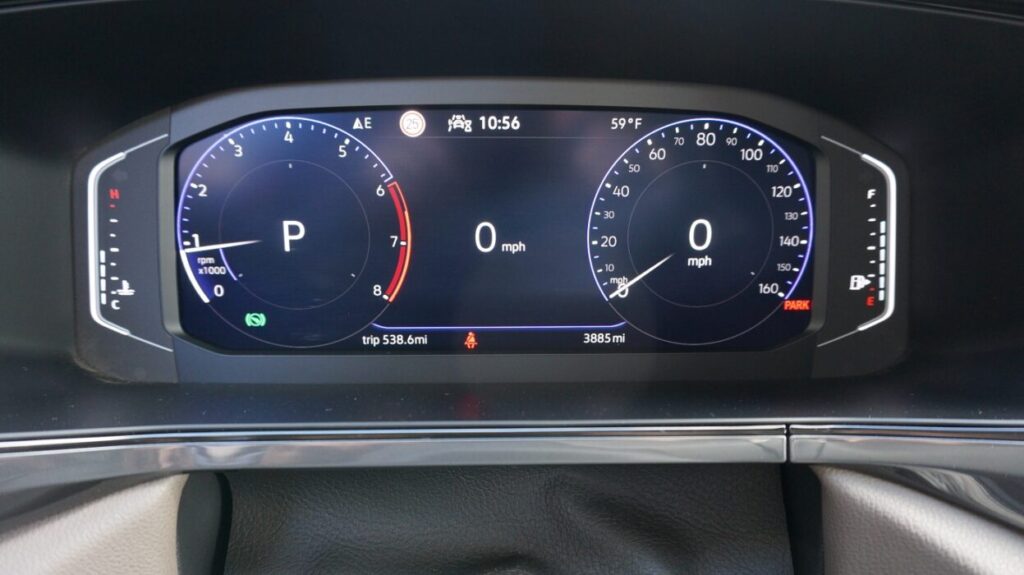 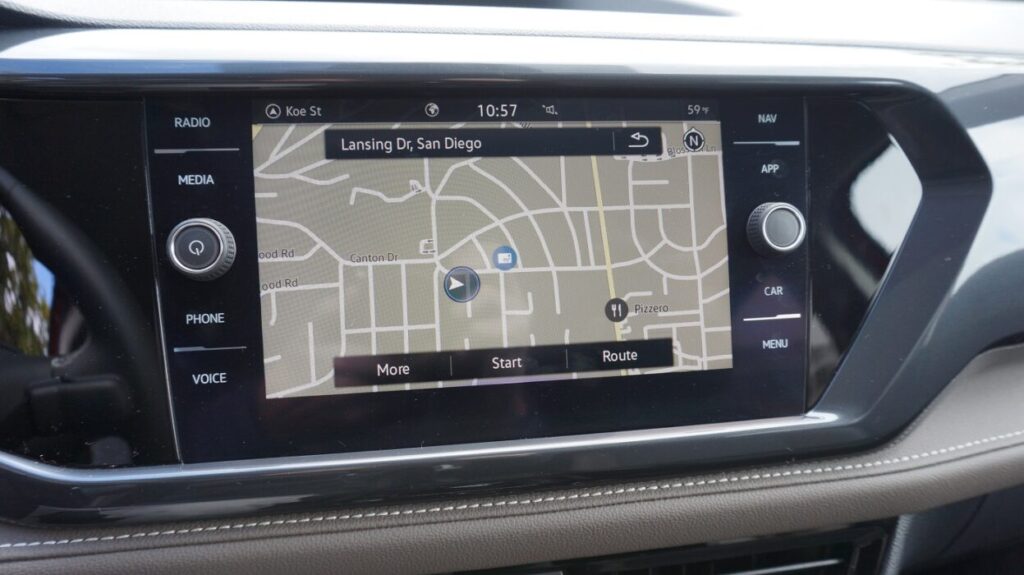 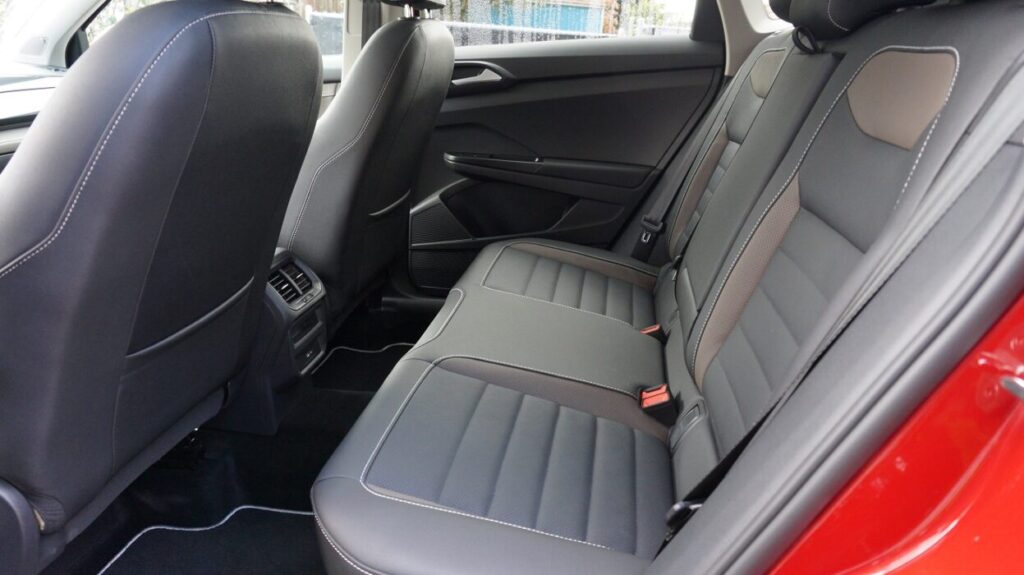 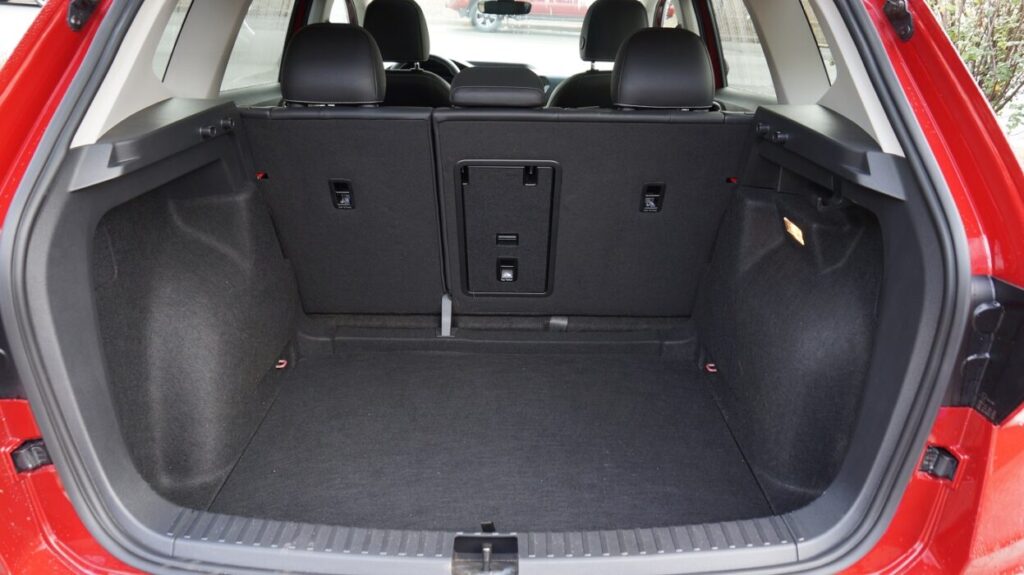 It’s immediately obvious on stepping inside that this is a Volkswagen, the design language is easy to spot and that’s a good thing. It feels solidly built and well made for the most part except for the top of the dash which is made from a material that resembles amazon packaging, it feels scratchy and really cheap. It’s odd because the rest of the plastics are of a much better quality, what happened?

The driver’s seat has power adjustment and in the SEL are leather-faced, the passenger, however, gets hand-cranked seat height and manual adjustment, which is to be expected in a vehicle at this price point. The steering wheel feels good in your hands and doesn’t have the capacitive touch buttons either which is a plus.

Rear seat passengers get plenty of legroom and more elbow space since the Taos is a tad wider than the Tiguan. The Tiguan, however, does offer a third row, so there’s that.

The SE and SEL trims get an 8-inch center touchscreen (6.5 inches in the Base S), and a 10.3 inch digital cockpit screen ahead of the driver.  Volkswagen’s latest MIB 3 infotainment is standard and includes Apple CarPlay and Android Auto, of which the former can run wirelessly.

Cargo space is very generous with very nearly as much space as the Tiguan offers, with the seat up you get 27.9 cubic feet of space, and if you fold down the 2nd row you get 65.9 cubic feet.

If you are looking for a budget-friendly sub-compact crossover that’s got plenty of space inside, a sweet little turbocharged engine, and great fuel economy, then it pays to take a close look at the Taos.

It’s worth noting that the Taos is a lot bigger than other small crossovers like the Honda HR-V and Nissan Kicks, in fact, it’s much closer in size to the Hyundai Tucson and Subaru Crosstrek.

I’m a big fan of Volkswagen’s Taos even if they were a bit late to the subcompact party, but when they finally arrived it was worth the wait.