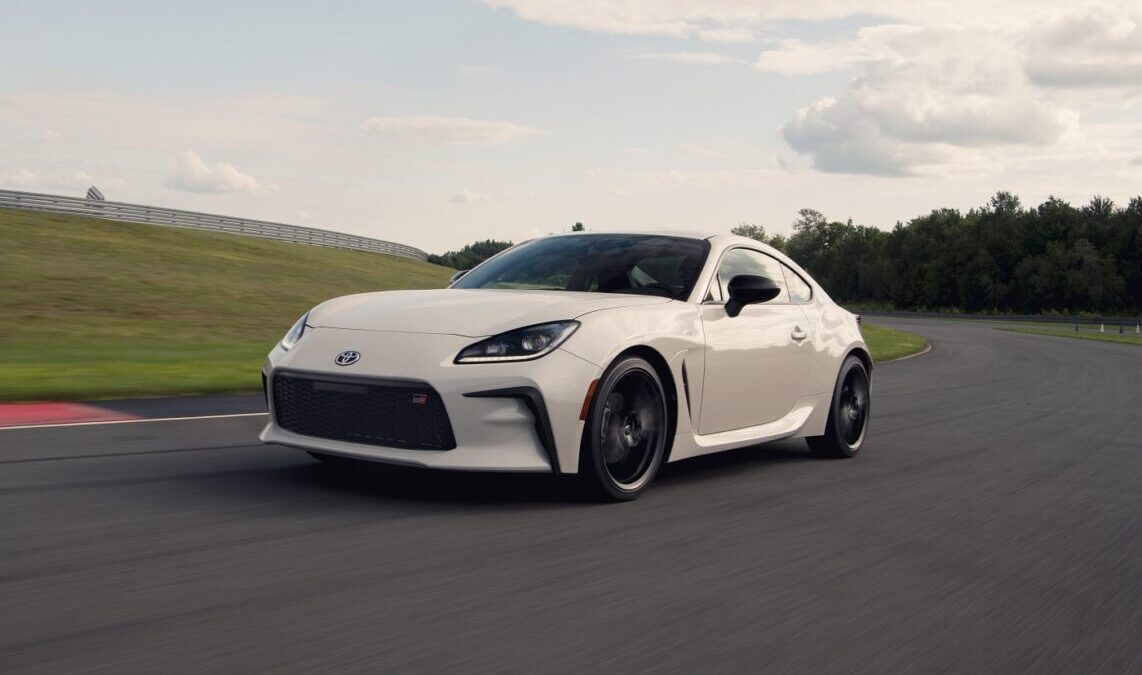 I really wanted to like the outgoing Toyota 86 especially since I drove the Hakone Edition which looked super cool in Green, however, I came away from the test feeling like I had been somewhat conned by all the reviews I had read. There was nothing wrong with the chassis, suspension, or handling but its lack of power and torque meant you had to thrash it within an inch of its life to get the best out of it, and that’s a chore.

So, when Toyota announced that they had given it a modest power bump I was slightly worried but once I got my 2022 Toyota GR86 Premium tester my fears were allayed.

I’m gobsmacked by how good this car is, it’s just incredible fun!

The basic architecture of the car is largely the same as its predecessor but it’s now wearing a fresh set of clothes. You can definitely tell the difference between the old and the new and in my opinion this car looks excellent, especially in Premium trim with its Supra-like rear wing.

Toyota has also strengthened the car’s structure with front and rear reinforcements. Now the GR86 has an aluminum roof and fenders to help offset the weight gain of around 80 lbs.

The biggest changes and the most important ones have taken place under the hood, gone is the old 2.0-liter flat-four that struggled with a distinct lack of torque and flat spots in the rev range. The replacement is a 2.4 liter which now has 228 hp and most importantly 184-pound feet of torque at a much lower 3,700 rpm. The previous engine’s torque peaked at a heady 6,400 rpm just in time to change up and lose it all.

To help with the flat spots the intake and exhaust plumbing has been smoothed out to improve airflow, the front knuckle has been stiffened as has the suspension, and revised steering makes it more communicative than ever.

My Premium GR86 tester had the 6-speed auto (previously I had only driven the manual) and so it came with the safety systems you don’t get in the stick shift including the very good Subaru eyesight system. The Premium comes with the 18-inch rims and Michelin Pilot Sport 4S tires instead of all seasons on the base trim. 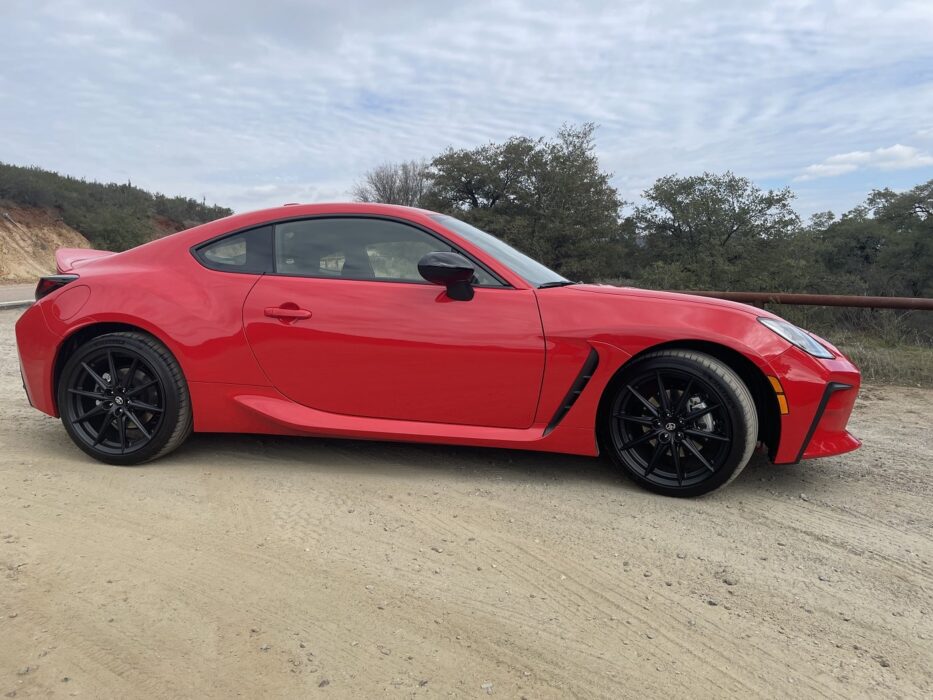 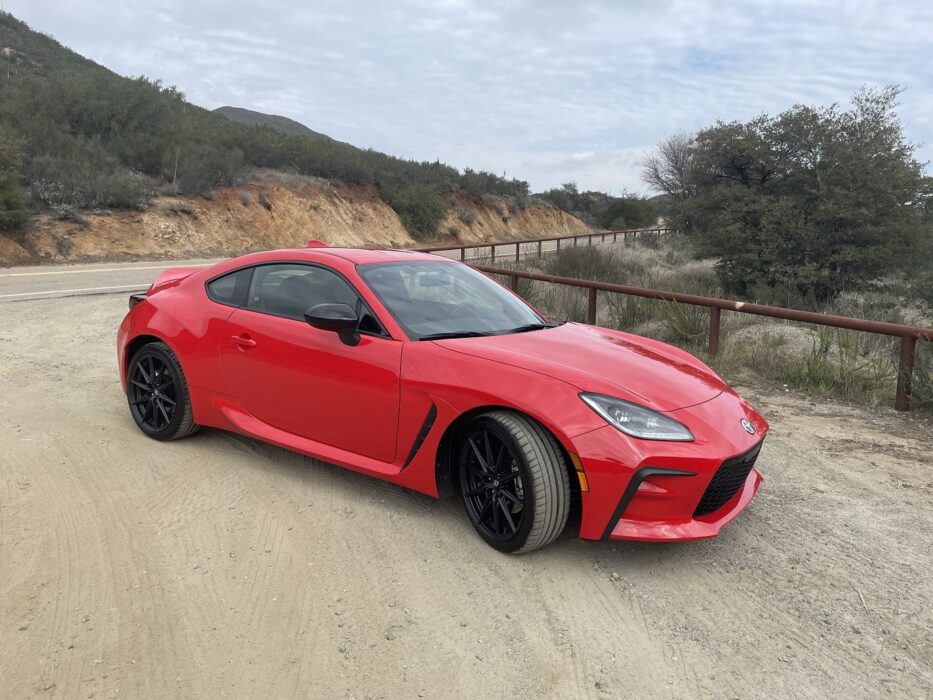 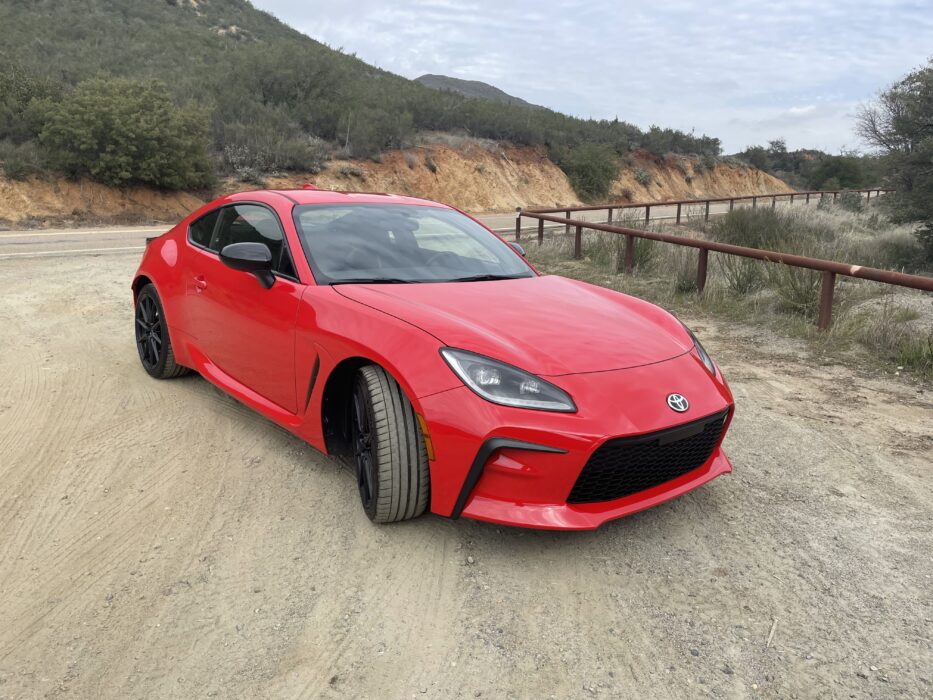 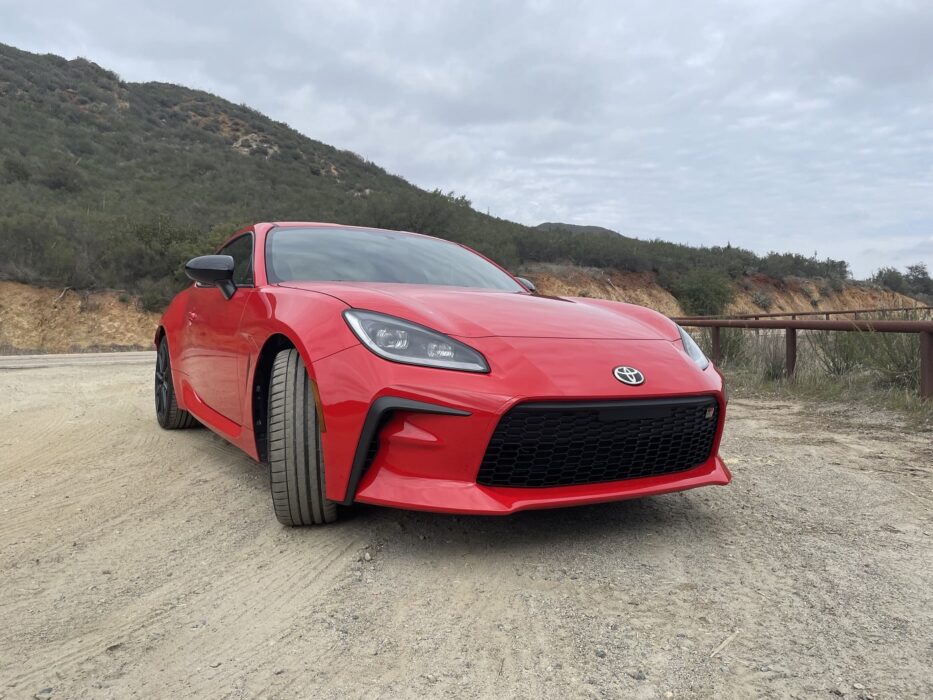 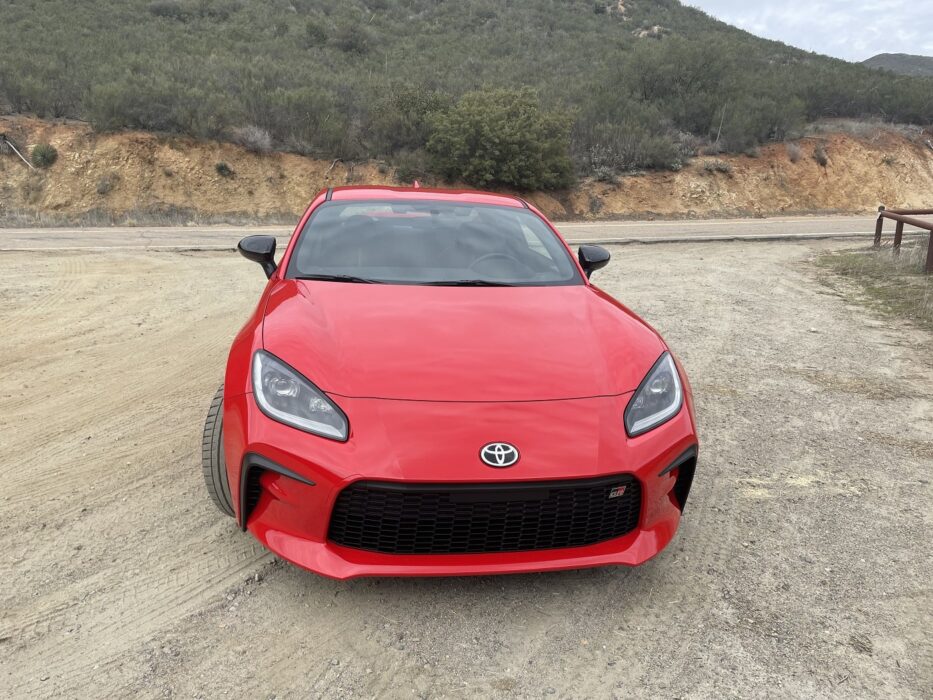 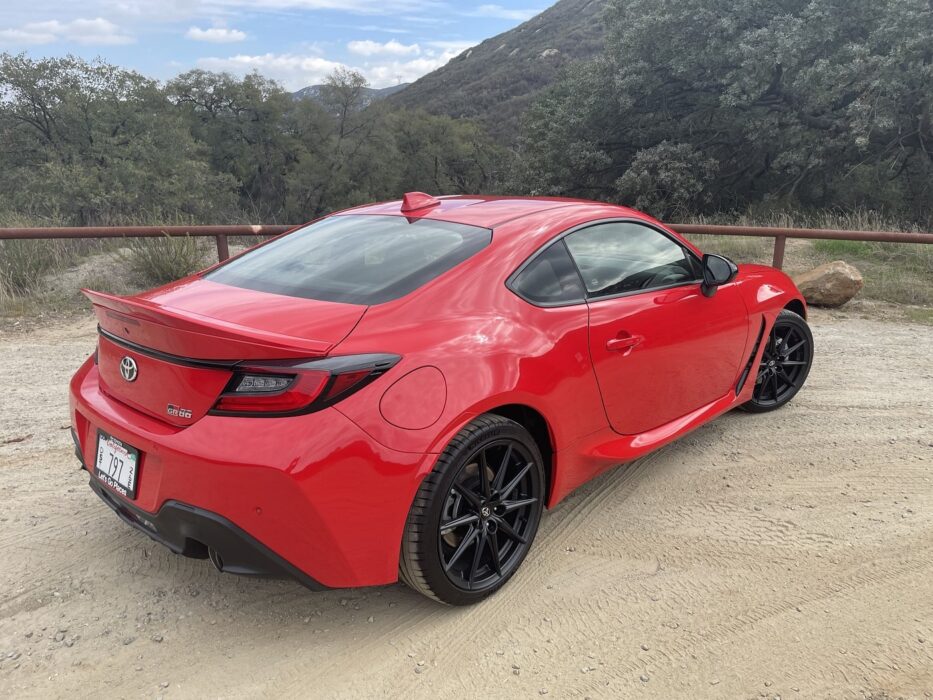 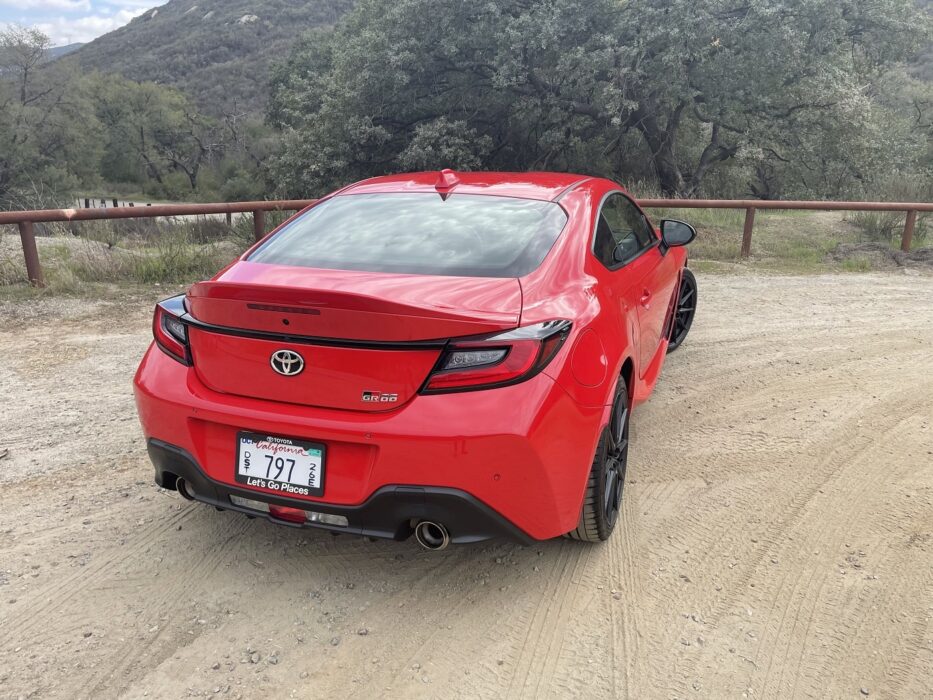 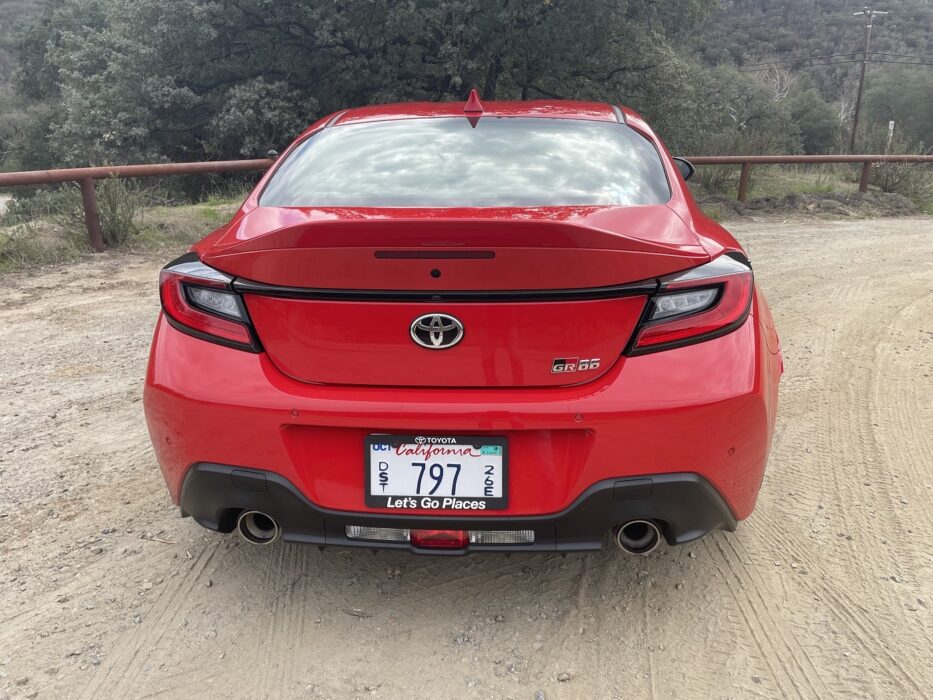 Despite the small horsepower and torque gains, the improvements are unbelievable. From the first push on the gas pedal, you instantly know it’s going to be good from the way the power is delivered to the sounds coming from the twin exhausts. Admittedly it is being piped through the speakers, but I don’t care, it’s so much better than the thrumming and thrashing of the old model.

The additional power helps the GR86 get from zero to sixty in 6.6 seconds to 60 mph (the manual takes 6.1) and onto the quarter-mile in approximately 14.0 seconds at 101 mph. These numbers are pretty much the same for its twin the Subaru BRZ.

As soon as the tachometer needle swings past 3,000 rpm or so, the 2.4 flat-four comes alive and continues all the way to the redline. It’s not neck-snapping acceleration by any means but it delivers a good old-fashioned linear pull, unlike the old model which stumbled at certain points in the rev range.

The car rides quite firmly so if you don’t like being bounced around then you’ll have to look elsewhere. Versus the old car, it feels much more solid; there’s an absence of suspension crashing over coarse surfaces and you get the feeling of the whole car being much more refined.

The little GR86 is now an absolute joy to fling into a tight turn, then stomp on the gas on exit and have the power to permanently keep a stupid grin on your face. The modest modifications have produced one of the most fun cars I have driven in a very long time.

There are a couple of drive modes, Snow, which we are unlikely to ever need here in San Diego, Sport mode, and Track, which dials down the traction controls for hooning around. At every opportunity, I selected Sport which makes the engine livelier, more responsive, and happier as it spins to the 7500-rpm redline. Blasting from each turn is epic fun and the car handles impeccably and with tons of grip thanks to the Pilot 4s tires. The steering is telepathic with tons of feel and quickness too, it makes for very rapid progress.

One negative and there aren’t too many are the brakes, Toyota has dropped the option of the Brembo’s this time around and that’s a shame, although you can still go aftermarket. The standard brakes are two-piston calipers with 11.6-inch rotors in the front, and 11.4-inch rotors with single-piston units at the rear. They stop the car but after some quick sessions on the tight twisty route we took they did heat up a lot and some fade was noticeable. The car is just so chuckable it definitely needs better stoppers.

Toyota says most buyers will opt for the automatic, however, forget about the paddles on the steering wheel since they are slow to react to inputs, it’s best to leave the automatic to just do its thing. 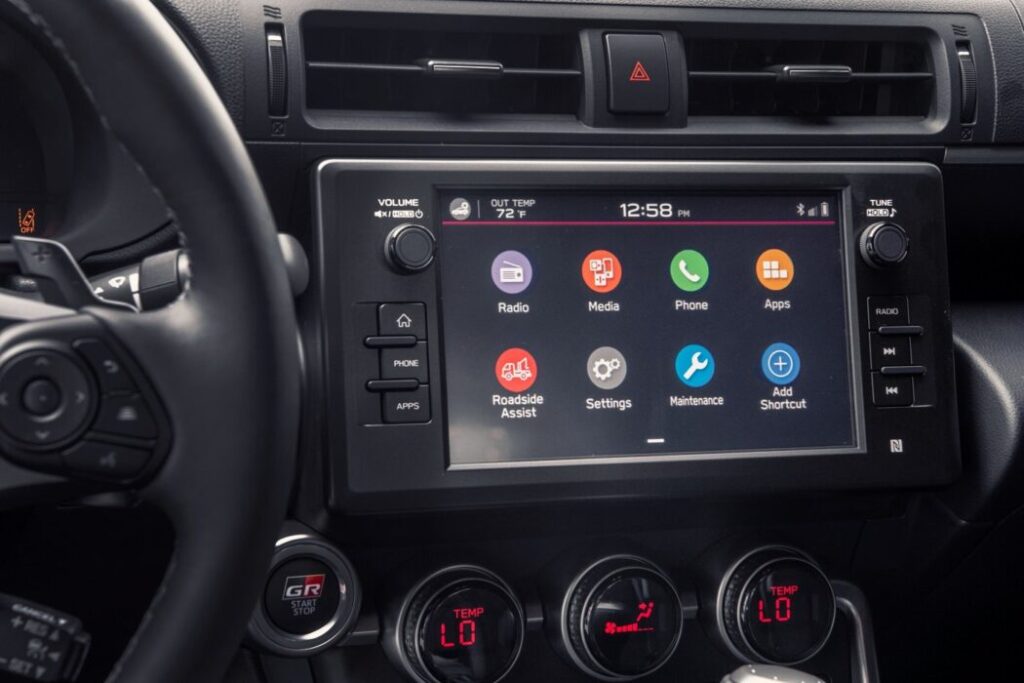 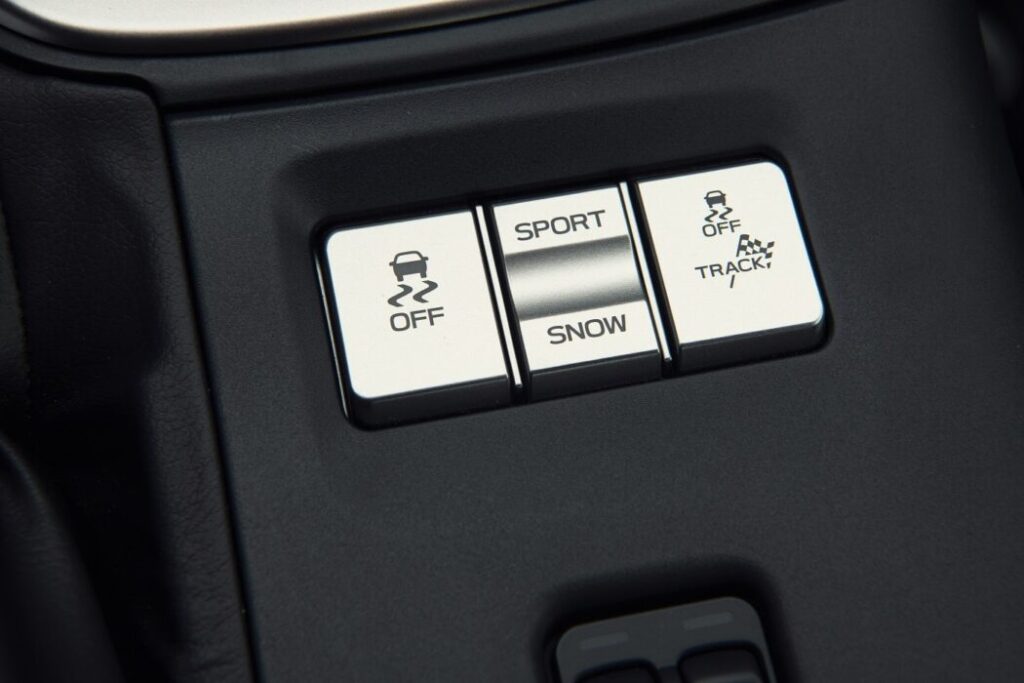 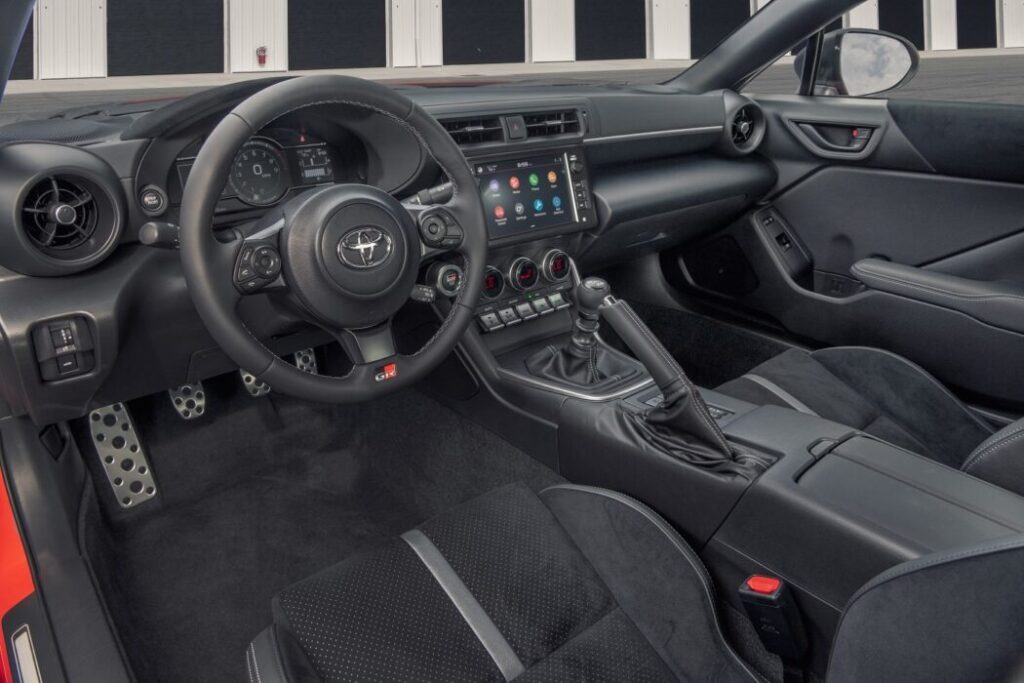 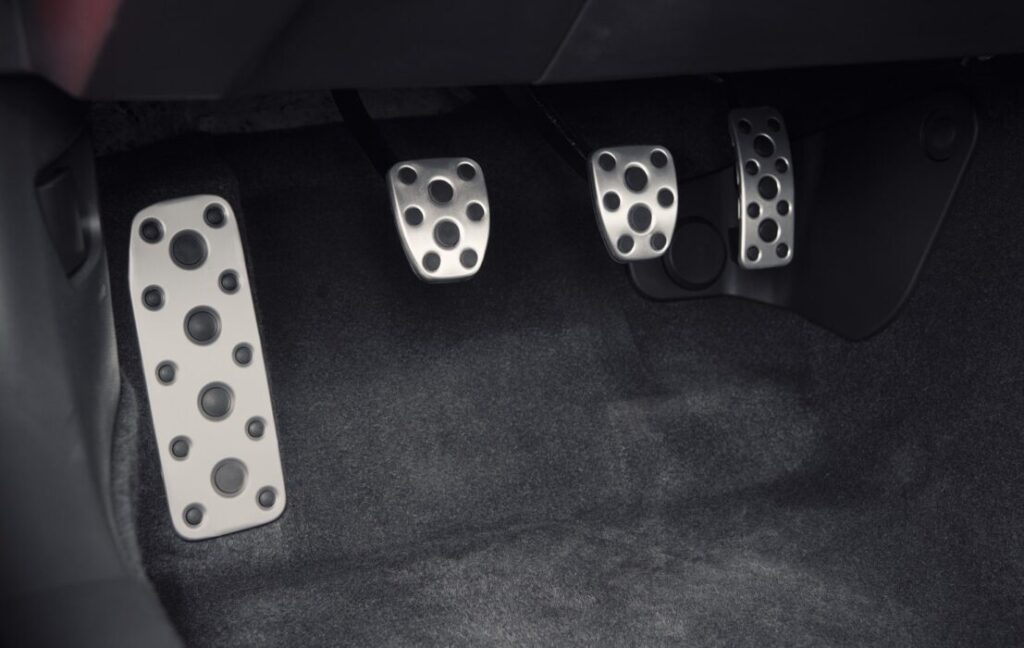 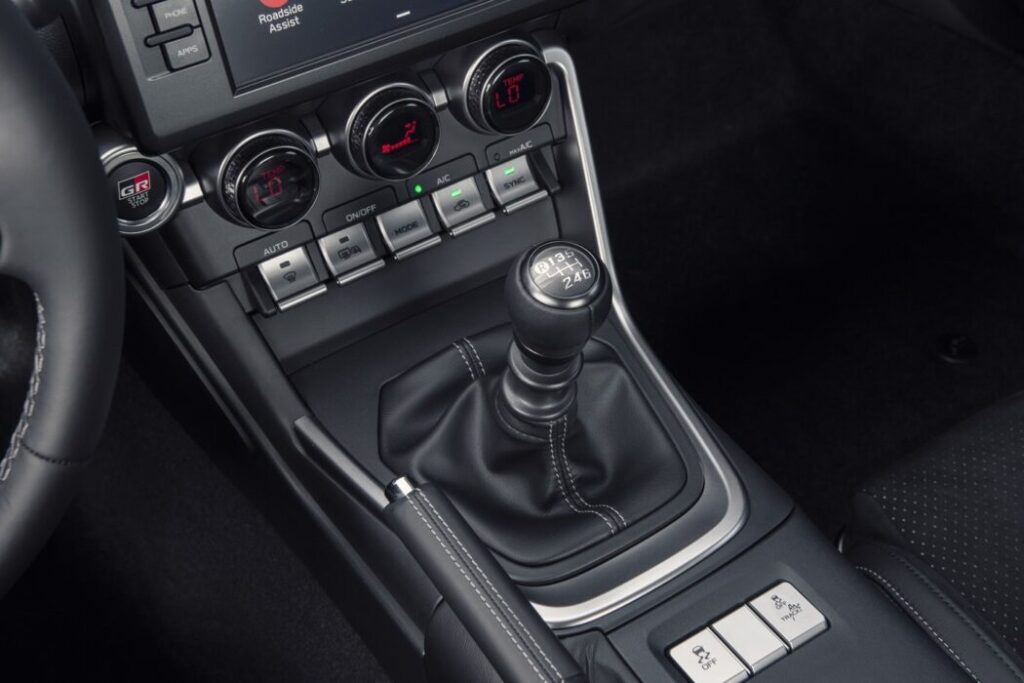 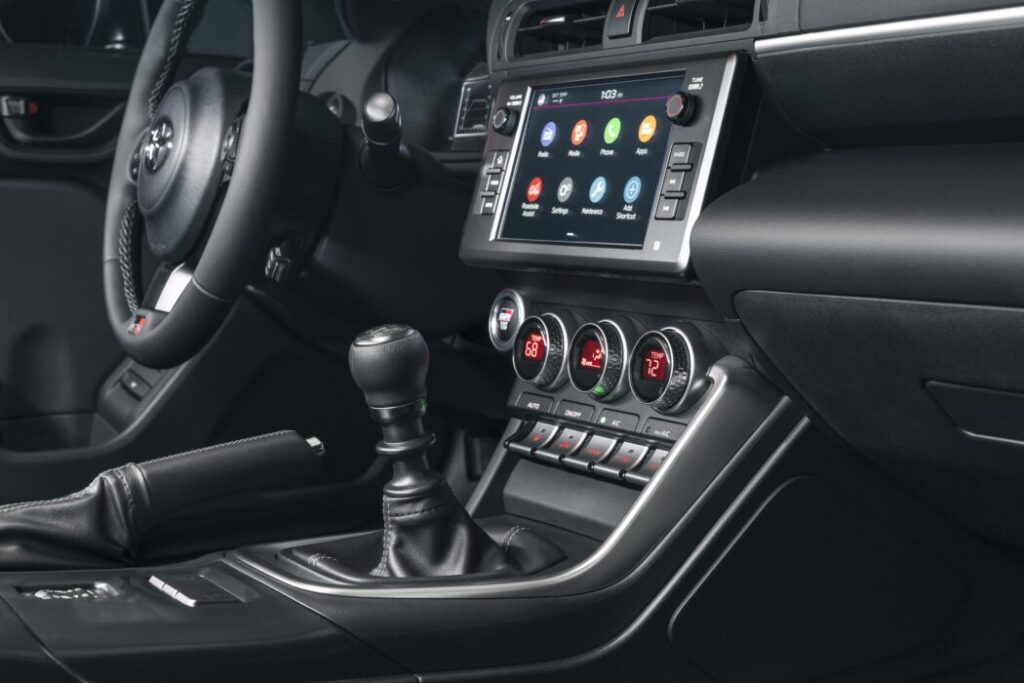 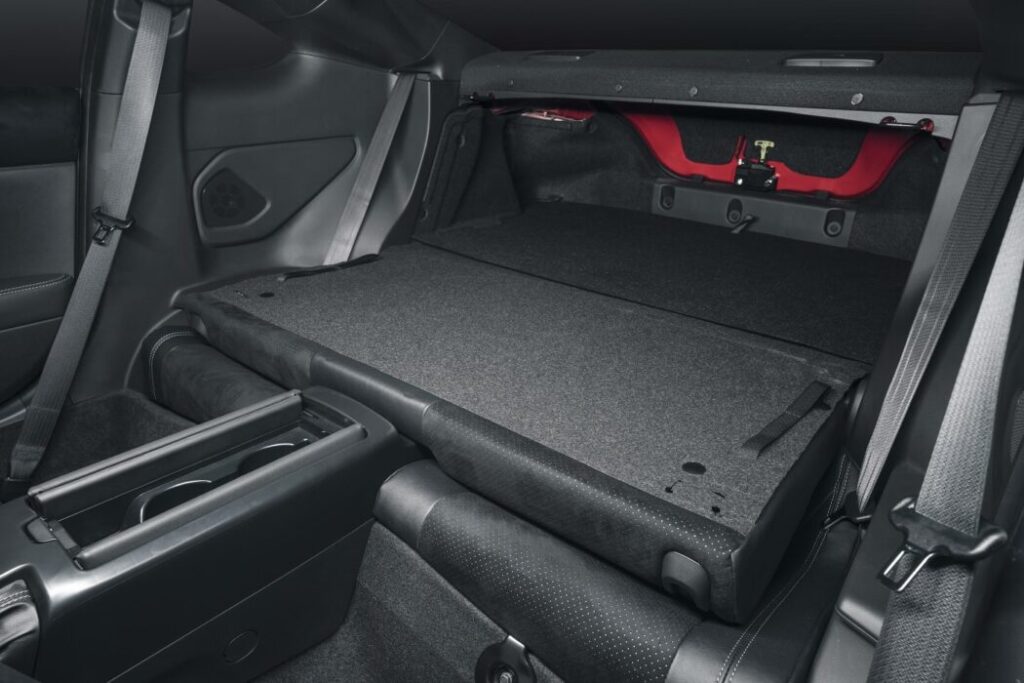 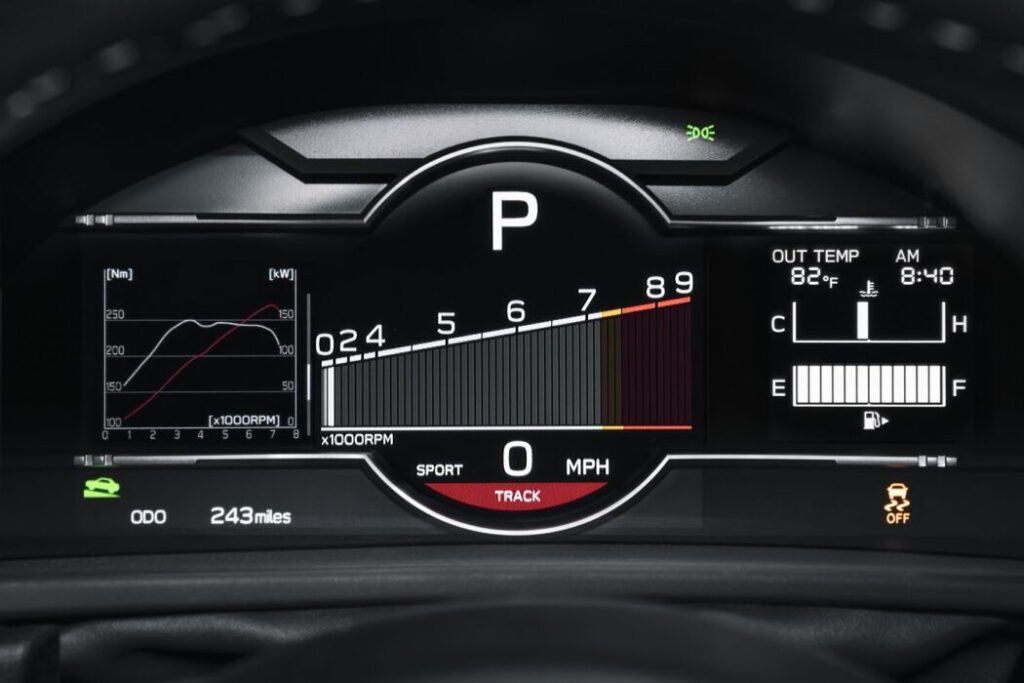 The Premium trim gets you some very nice Alcantara covered seats, with some extra thrown in on the dash and door panels. Ahead of the driver is a new partially digitized gauge cluster which changes when you select Track mode, the tachometer changes to a horizontal ribbon-style bar.

In the center console, a new and larger touchscreen (8-inches) runs Subaru’s software and offers standard Apple CarPlay and Android Auto. It’s easy to use and relatively quick. I especially like the HVAC controls with their large round dials for temperature and fan speed and the newly designed rocker switches below Mode, Recirc, Sync, etc.

Materials quality throughout the cabin is much improved especially so for a sub $35k car, plus the rock-solid Toyota reliability is a certainty.

Cargo space in the rear is fairly limited (6.9 sq. feet) but you can still fold the rear seats flat if you need to carry longer items. I took a trip to the garden center and managed to fit in several plants, 3 bags of soil, and a 6-foot pole.

I must say this is now one of my favorite cars and I can’t think of another car at this price point that is so much fun to drive. My Automatic tester came in at a shade over $33K, however, the base model starts at $28,635 and includes front and rear LED lights. I would choose the Premium trim solely for the cool-looking ducktail spoiler, it just makes the car look great.
If you haven’t driven one then you should because this is simply the biggest turnaround I have seen in a refreshed car, it’s superb.