I finally got my hands on a 2022 Subaru BRZ with a manual transmission, now as you remember I tested this one’s Toyota twin a few months ago but that one had an automatic transmission which was very good but not a stick.  I was supposed to test this BRZ several weeks ago but it got damaged and the parts weren’t available thanks to supply chain issues, now that I finally have it I need to decide which one of the Toybaru twins I would buy.

Difference between the Subaru BRZ and the GR86

First of all, what does the BRZ name mean, Subaru says it stands for “Boxer engine, Rear-wheel drive, and Zenith. Now with that out of the way let’s get into the specifics. Visually there’s not much difference except of course for the badges, the Subaru has a smaller and less aggressive grille, more of a smiley face to the dour fish face look of the GR86.

Subaru and Toyota install their own unique headlights and bumpers, and the BRZ has a different design for the side vents. The BRZ grille is in two parts and has a splitter to help increase downforce and at the rear, neither trim gets the Supraesque ducktail spoiler, instead, it makes do with the standard one.  Other than those items they share the same engines, transmissions, and body structure.

Where they do differ is the suspension, the Toyota uses the old 86’s rear setup, so it has a subframe-mounted anti-roll bar and slightly different spring rates.  Subaru, however, has changed more underneath the new BRZ, the front springs are stiffer by 7 percent and the rear springs are 11 percent softer, and they also installed a 1mm-thinner rear anti-roll bar and mounted it directly to the BRZ’s body instead of the subframe. The front anti-roll bar is hollow and the front knuckles are aluminum.

All this adds up to a much more neutrally balanced BRZ versus the GR86, thanks to those softer rear springs. The bonus if you see it that way is the GR86 is more willing to slide the rear end than the Subaru. The Subaru hangs on longer but can be unpredictable when it finally gives up.

If you opt for the Limited trim like my tester you get 18-inch wheels with sticky Michelin Pilot Sport 4’s, if you enjoy drifting to the shops then get the base model which has skinnier all seasons on 17-inch rims. Interestingly there is one other interesting difference between the two cars, more buyers opted for an auto transmission in the FRS,  approx 70% whereas in the BRZ 70% chose to go with the manual.

Under the hood is the more powerful and bigger 2.4 liter from the Outback which now has 228 hp and most importantly 184-pound feet of torque at a much lower 3,700 rpm. The previous engine’s torque peaked at a heady 6,400 rpm just in time to change up and lose it all. The 6-speed manual is an in-house transmission developed by Toyota and is based on Aisin AI’s AZ6. 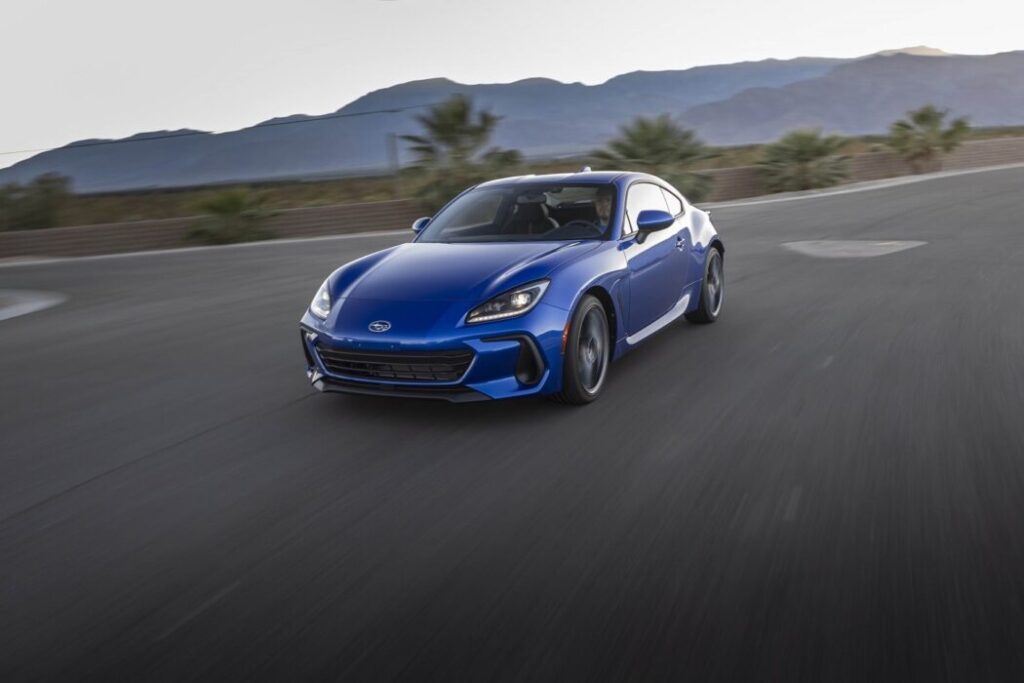 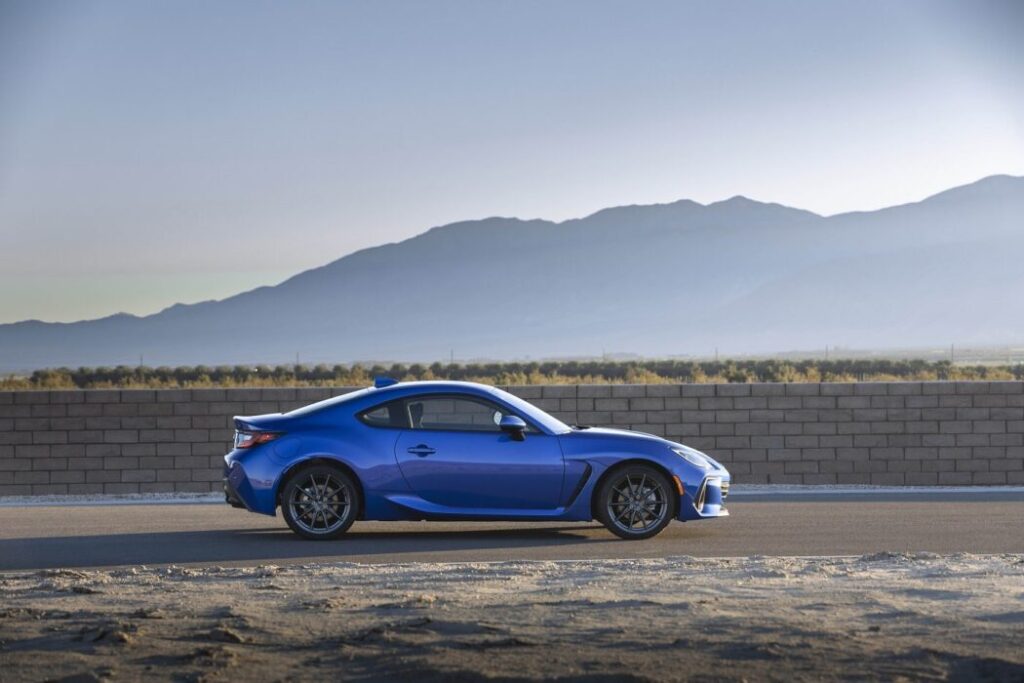 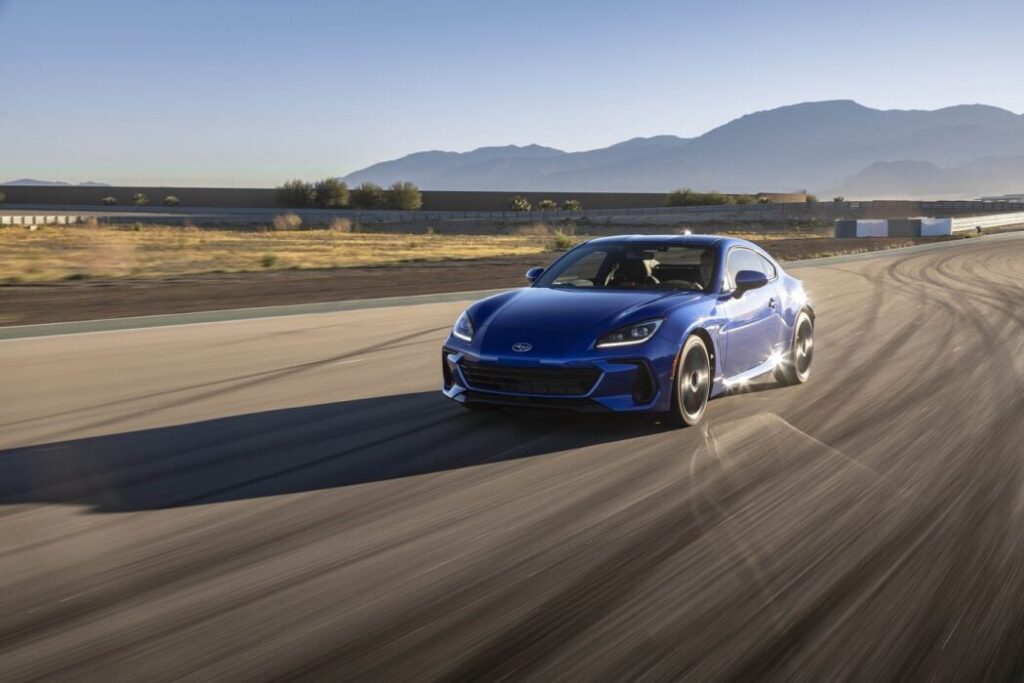 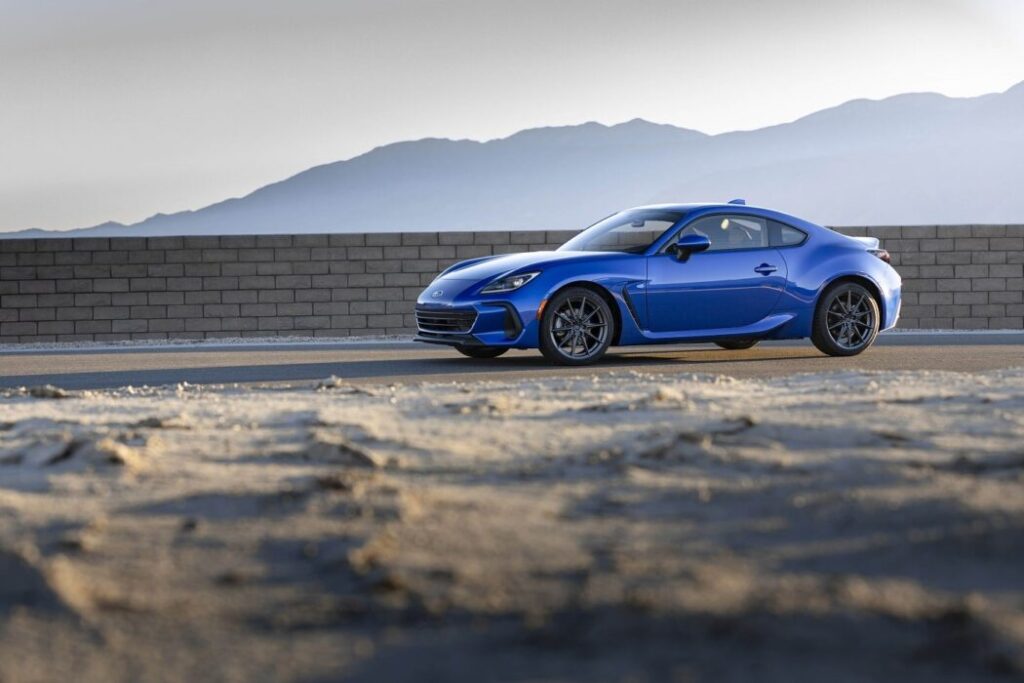 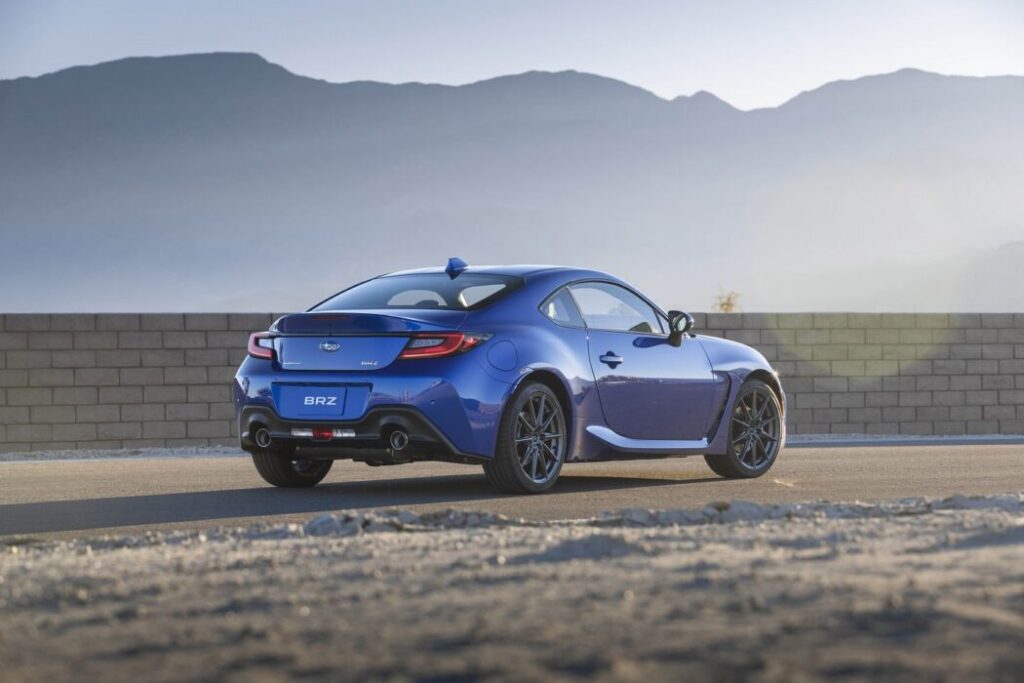 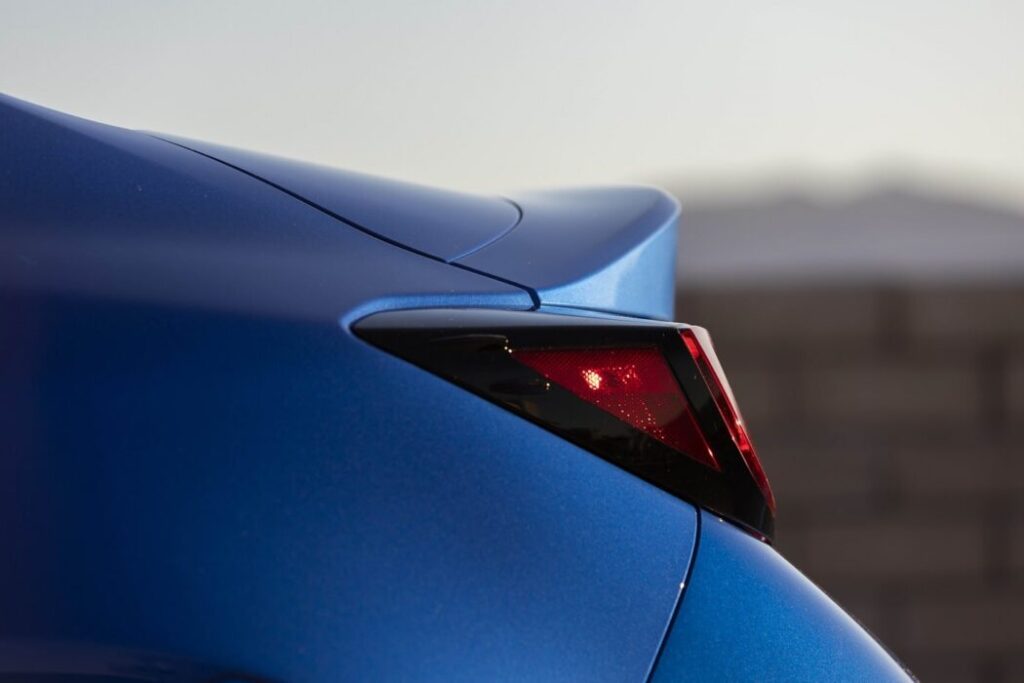 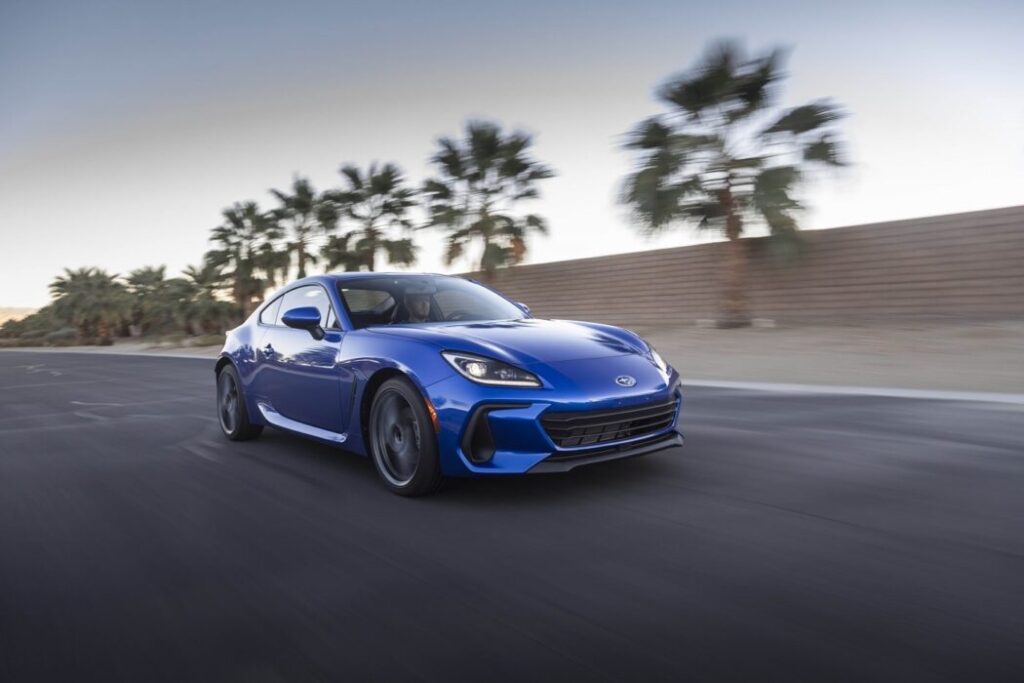 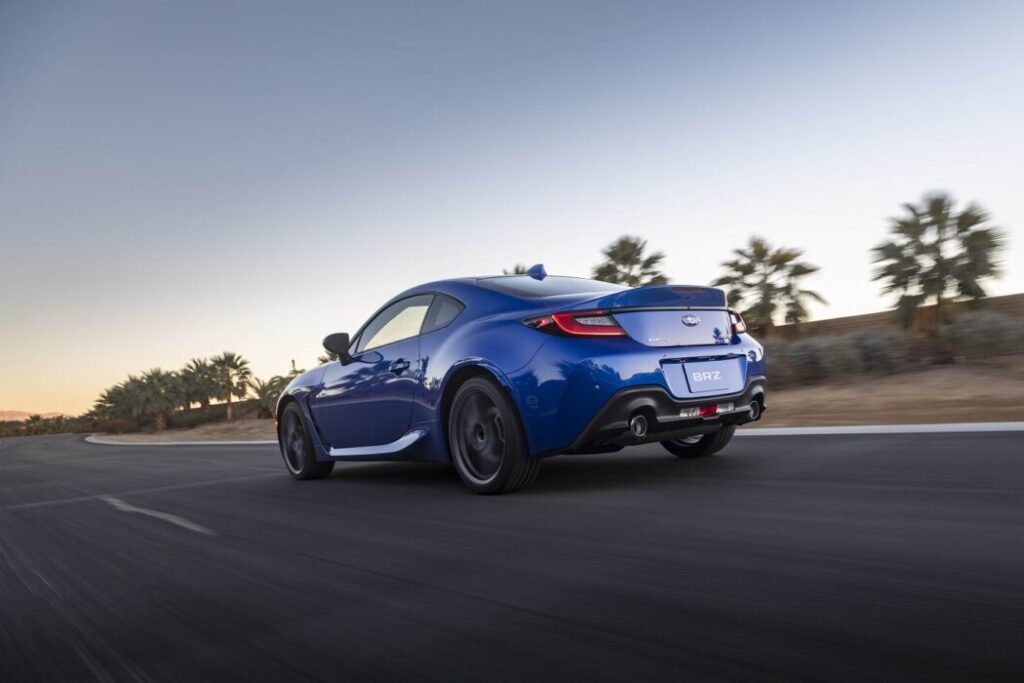 Despite the small horsepower and torque gains, the improvements are unbelievable. From the first push on the gas pedal, you instantly know it’s going to be good from the way the power is delivered to the sounds coming from the twin exhausts. Admittedly it is being piped through the speakers, but I don’t care, it’s so much better than the thrumming and thrashing of the old model.

The manual transmission is a rare case of it being quicker than the automatic and despatches the zero to sixty benchmark in 5.8 seconds, some half a second quicker. These numbers are pretty much the same for its twin the GR86.

You no longer have to wait and wait for the torque to kick in, it’s now available as low as 3,000 rpm, get it above 4,000 though and it comes alive.  It’s not neck-snapping acceleration by any means but it delivers a good old-fashioned linear pull, unlike the old model which stumbled at certain points in the rev range.

The car rides quite firmly so if you don’t like being bounced around then you’ll have to look elsewhere. Versus the old car, it feels much more solid; there’s an absence of suspension crashing over coarse surfaces and you get the feeling of the whole car being much more refined.

The BRZ can be flung into the turns at quite high speeds, it just grips, thanks to the excellent Michelin Pilot Sport 4S tires.  It’s easy to see out of to so you hit your apexes perfectly, stomp on the on exit, and blast to the next corner. Stupid grins are standard with this car.

I did like the auto transmission but the manual is the only way to go, it’s not the best one I’ve driven, that has to be the superb Honda Civic but it’s precise with a slick shift action as well as a nice take up on the clutch and perfect pedal spacing for heel-toe downshifts.

Fling it into a tight turn and there’s very little body roll, you sit low so the sensation of speed is enhanced, its the perfect car to go fast without breaking too many speed limits. It has to be one of the most fun cars I have driven in a very long time.

There are no drive modes (except for Track mode), that’s your left and right foot’s job, and your right arm; get those working in harmony and this car will almost defy physics. One plus is the increased drivability means you can pass slower cars on a two-lane highway and not have to do so with white knuckles.

One negative and there aren’t too many are the brakes, the option of the upgraded Brembo brakes is not available and that’s a shame, although you can still go aftermarket. The standard brakes are two-piston calipers with 11.6-inch rotors in the front, and 11.4-inch rotors with single-piston units at the rear. They stop the car but after some quick sessions on the tight twisty route we took they did heat up a lot and some fade was noticeable. The car is just so chuckable it definitely needs better stoppers. 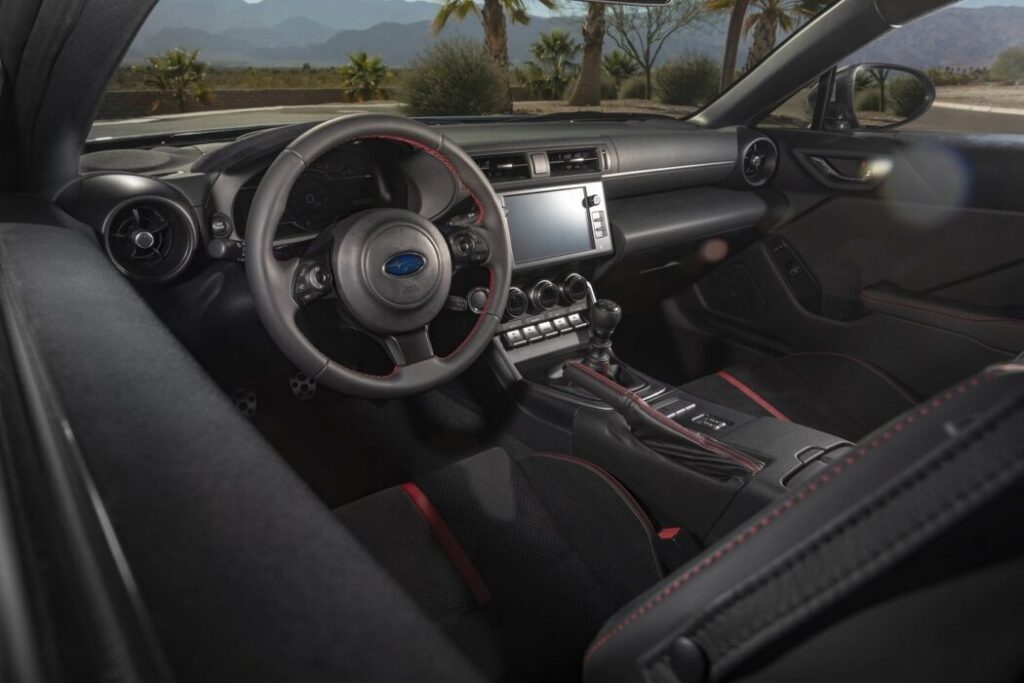 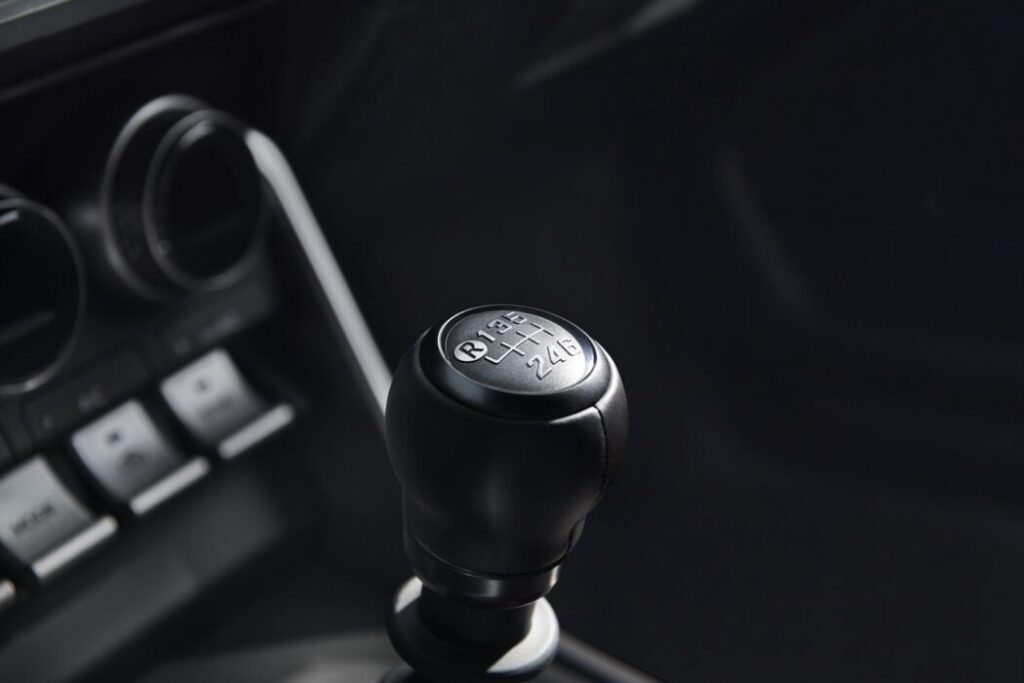 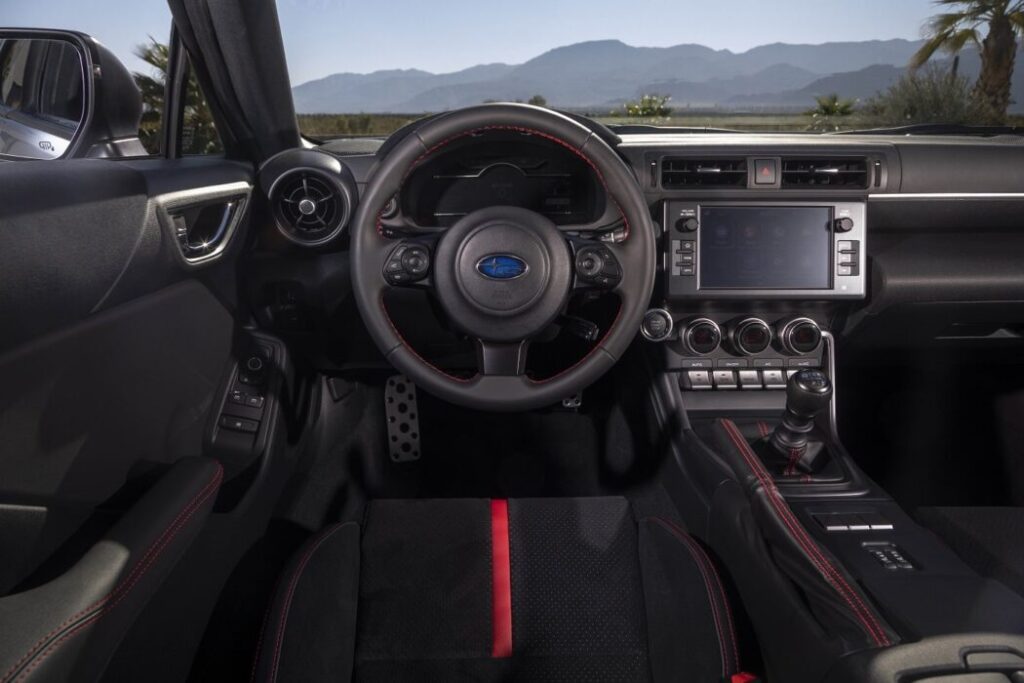 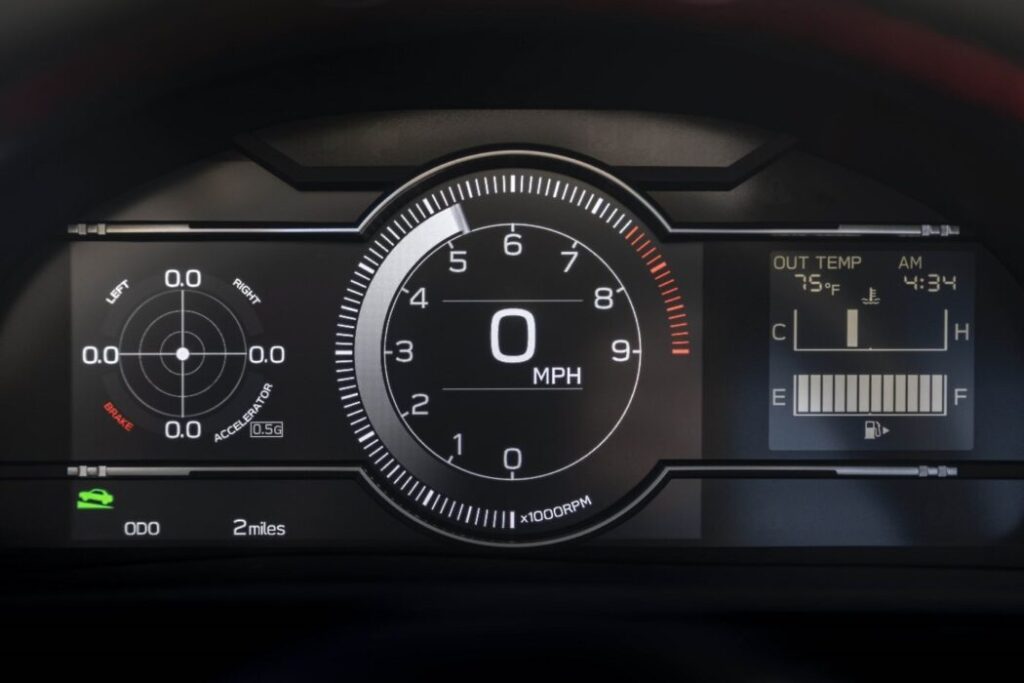 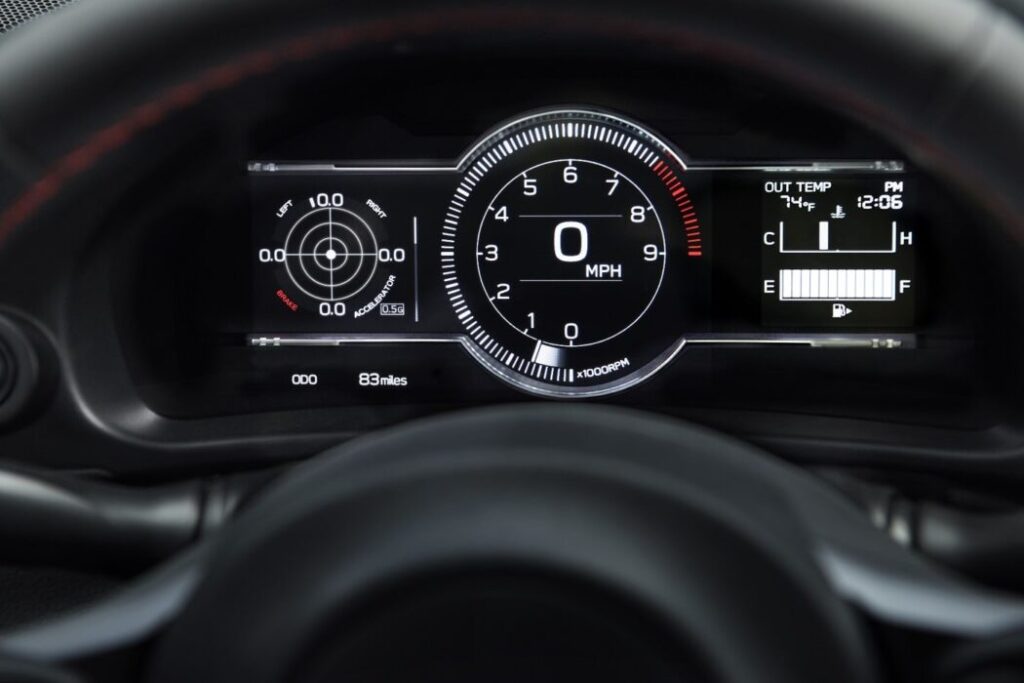 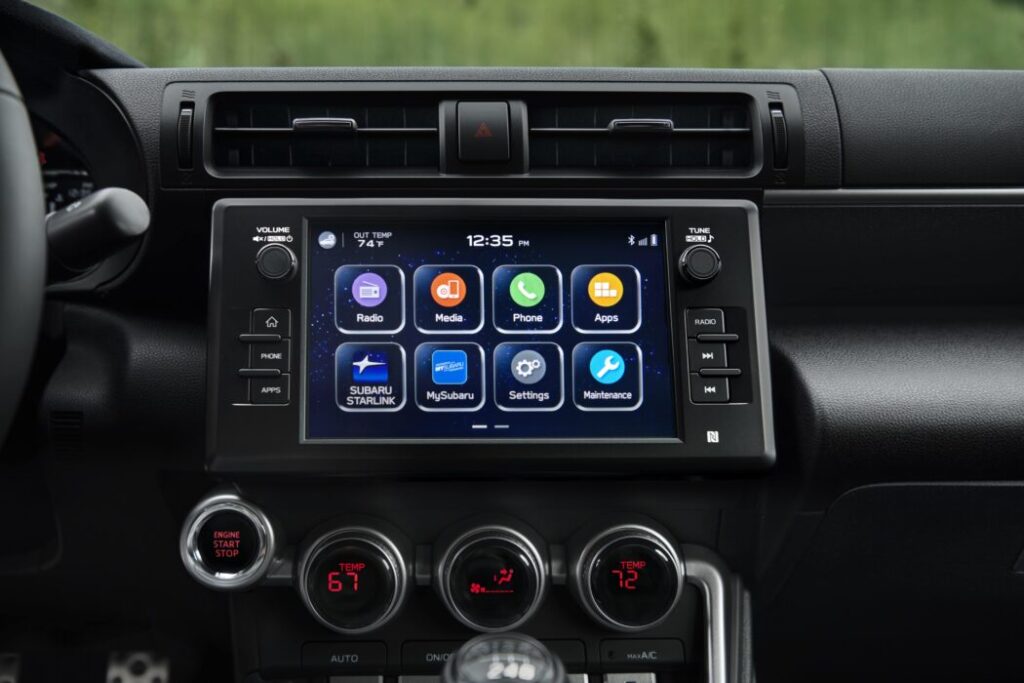 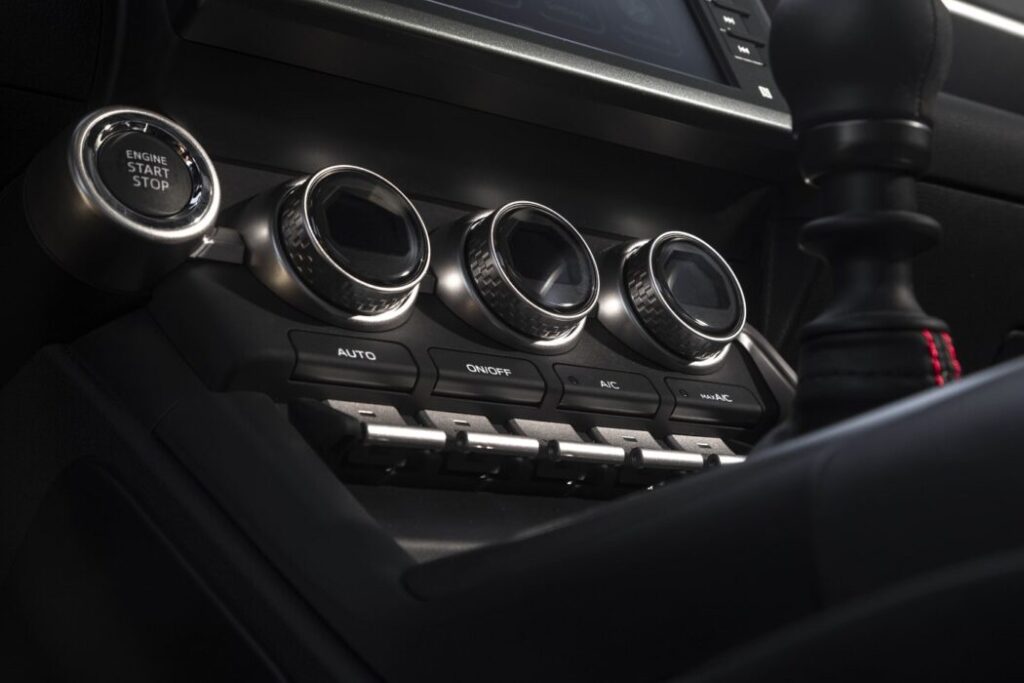 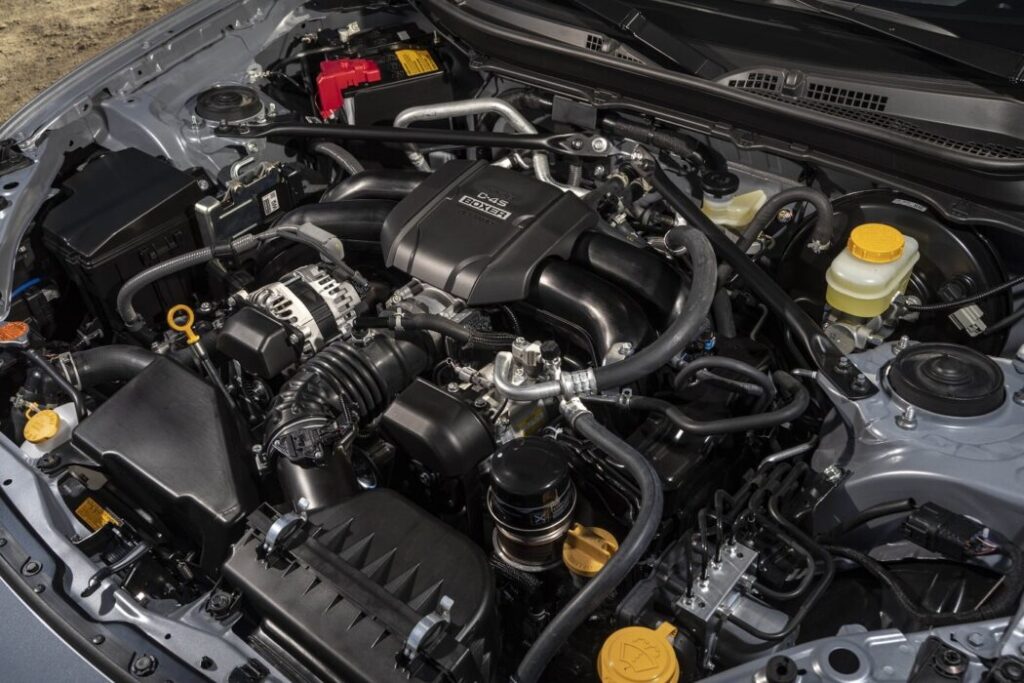 The Limited trim gives you some very nice Alcantara-covered seats, with some extra thrown in on the dash and door panels. Ahead of the driver is a new partially digitized gauge cluster that changes when you select Track mode, which makes the tachometer change to a horizontal ribbon-style bar.

In the center console, a new and larger touchscreen (8-inches) runs Subaru’s software and offers standard Apple CarPlay and Android Auto. It’s easy to use and relatively quick. I especially like the HVAC controls with their large round dials for temperature and fan speed and the newly designed rocker switches below Mode, Recirc, Sync, etc.

Materials quality throughout the cabin is much improved especially so for a sub $32k car, plus the rock-solid Subaru reliability is a certainty.

Cargo space in the rear is fairly limited (6.9 sq. feet) but you can still fold the rear seats flat if you need to carry longer items. The rear seats themselves are fairly useless and really only good for children, small ones at that.

This and the GR86 are two of my favorite cars and I can’t think of another car at this price point that is so much fun to drive. My manual transmission tester came in at a shade over $31K, however, the base model starts at $28,595 and includes front and rear LED lights.