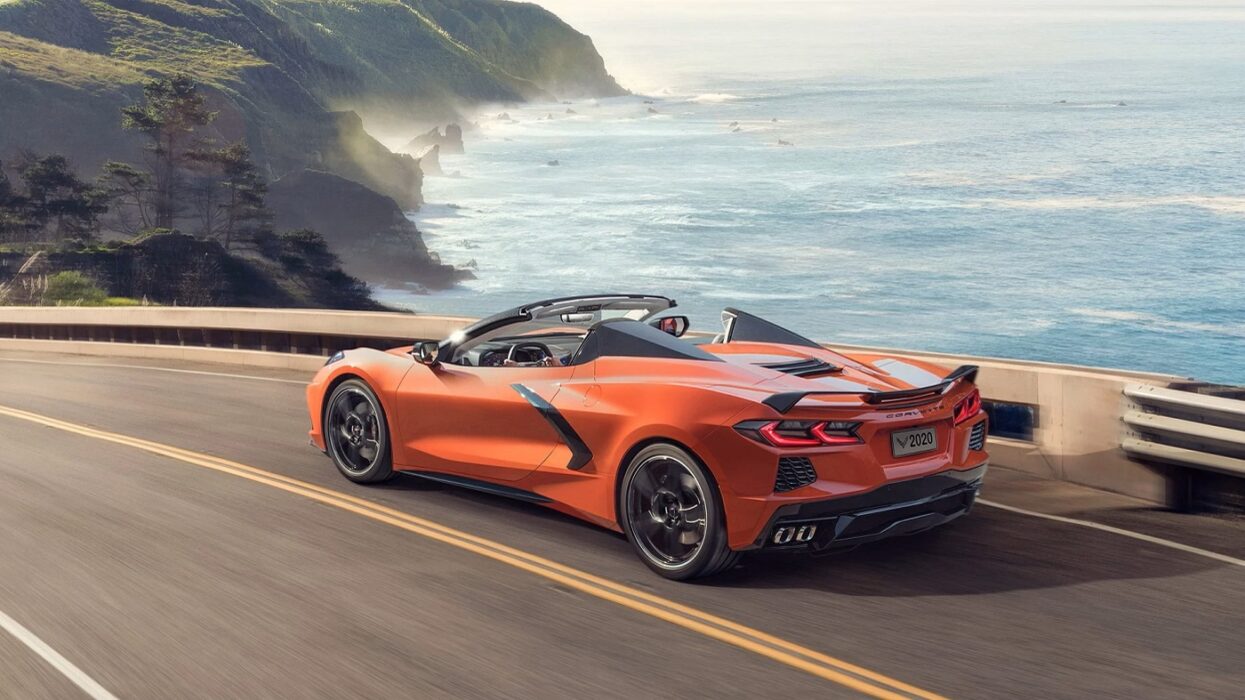 The C8 is hard to get

A similar situation occurred when it was launched, the all-new 2020 model was originally intended to begin production in December 2019. This was pushed to February 2020, due to the labor strike in 2019 and then right after that, the COVID-19 pandemic shut down production causing more delays meaning orders for 2020 models had to be pushed out to 2021.

Bear in mind that the coupe version does have a removable roof section, but this requires manual effort and when you stow the panel in the rear storage area you lose almost all of that available space. Since the convertible simply folds itself on top of the engine compartment cover you have the best of both worlds, open-top joy and somewhere to put your golf sticks.

The top takes about 16 seconds to raise or lower, and it will work at 30 mph, good if you are caught in a sudden rainstorm as I was. It should probably play music while it does since it’s somewhat balletic in its motion. Push or pull the switch, which is located behind the window switches on the driver’s door and the tonneau cover unfolds as the multipiece hardtop folds into place. If you are in the vicinity of people then expect them to stop and stare as well as take a photo, this is still a rare enough care for it to be a very unusual sight.

The base car is the Stingray, the performance pack is the Z51, which my tester a 2021 Corvette Convertible 3LT had optioned and includes Performance Brakes, Performance Suspension, Magnetic Ride Control which is now available as a separate option for $1,895 so you don’t have to order the $5,995 performance package to get it.   Also included are a Performance Exhaust (adds 5hp), a Performance Rear Axle ratio, an Electronic Limited Slip differential, a Rear Spoiler, and Michelin Pilot Sport 4S summer tires. The rear spoiler that comes with the Coupe’s Z51 Performance Package is standard on the Convertible to better manage airflow.

The venerable 6.2-liter V8 paired with the new Tremec eight-speed dual-clutch is a perfect match and is fed using a dry sump, the advantage of which is it helps avoid engine oil starvation while driving at speed. Chevrolet claims the LT2 can handle 1.25 g sustained lateral accelerations in any direction.

The V8 packs 495 horsepower and 470 pound-feet of torque and is capable of ripping to 60 in 2.9 seconds (with Z51 package) which is ridiculously fast for a car with a sticker, even if this one is quite a bit more expensive than the coupe. 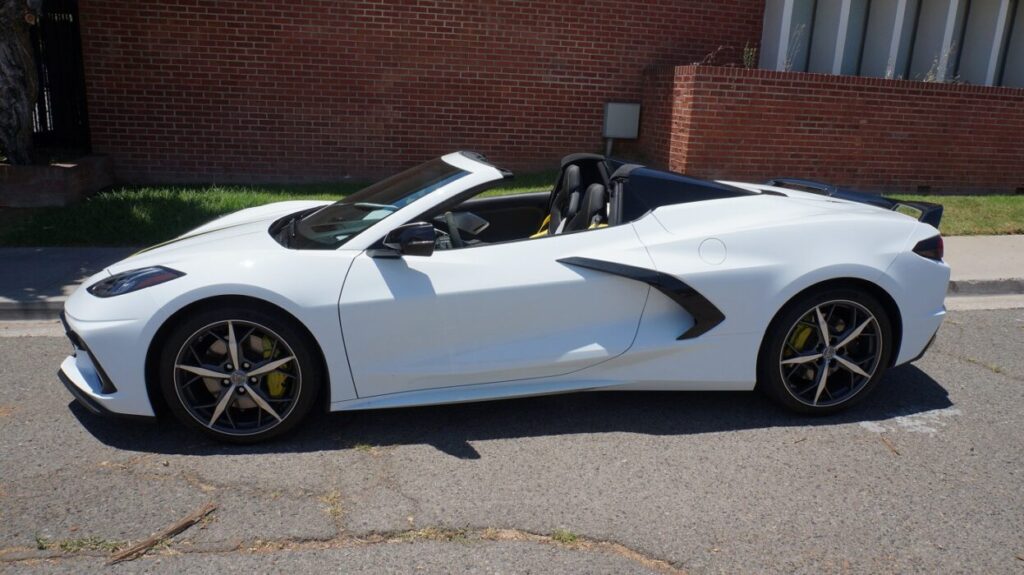 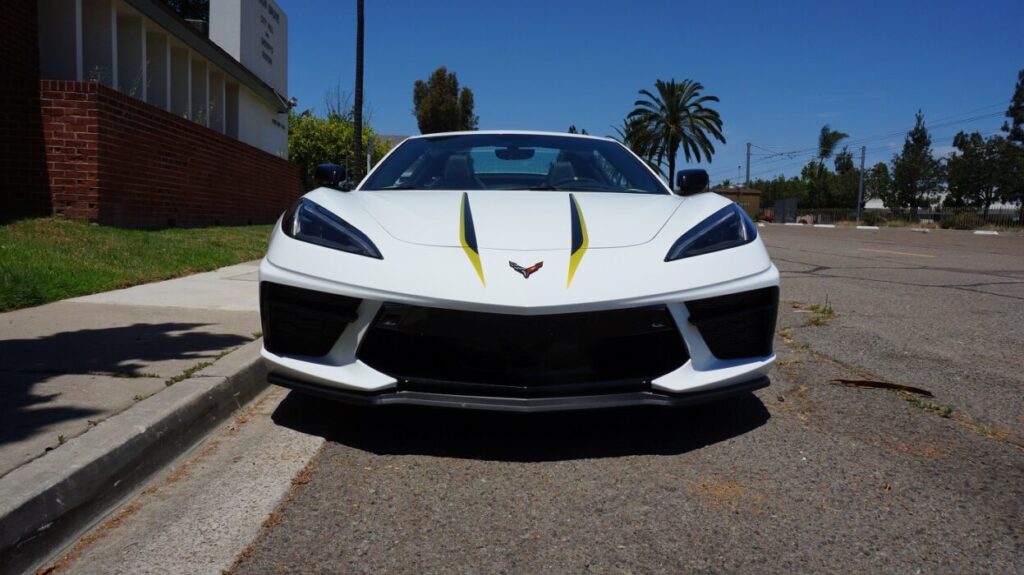 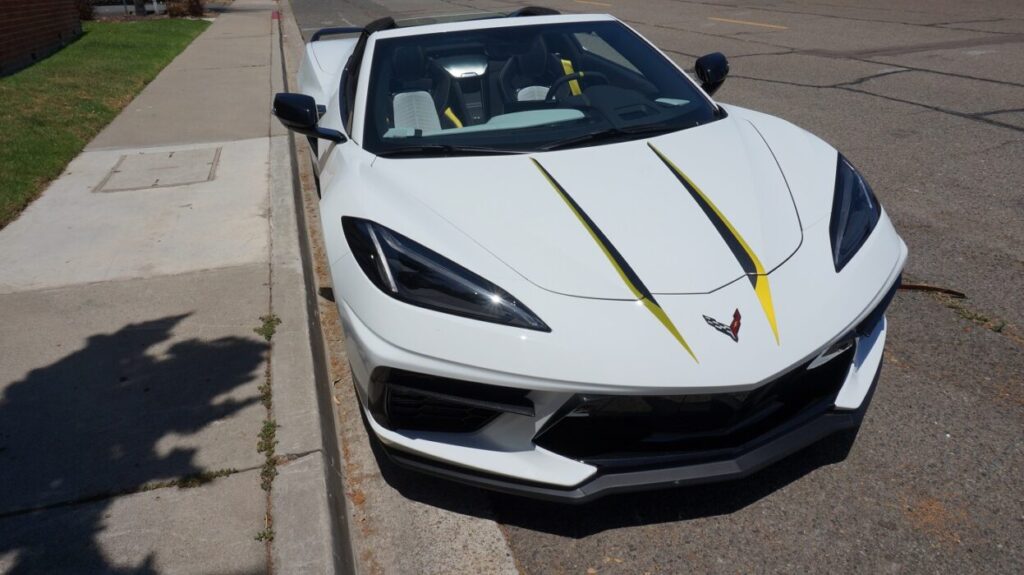 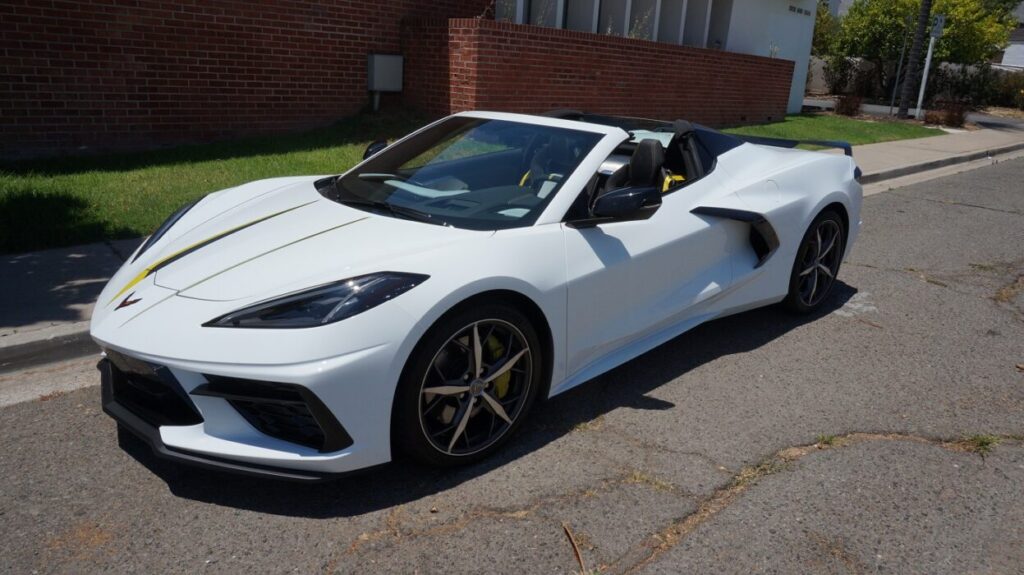 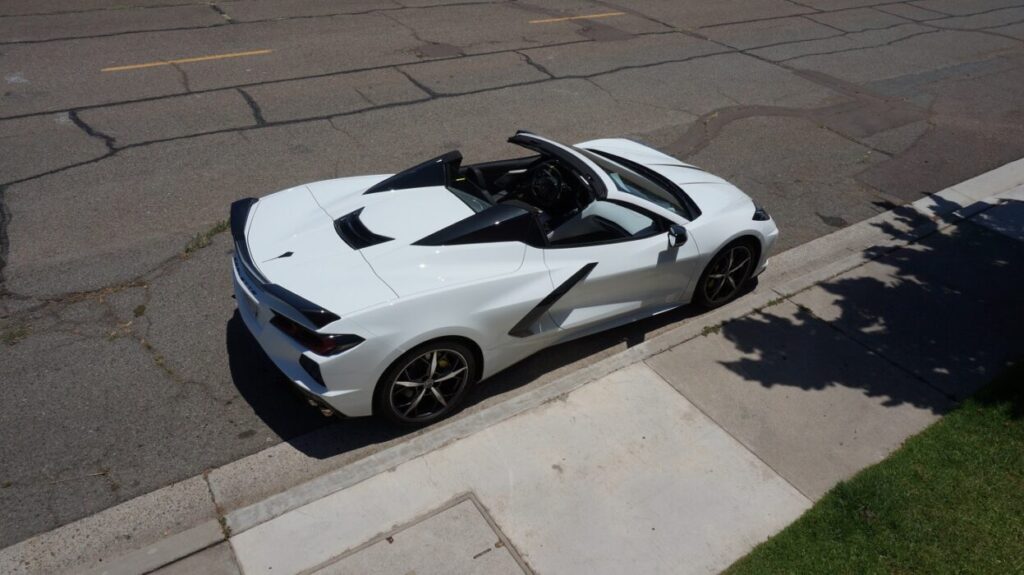 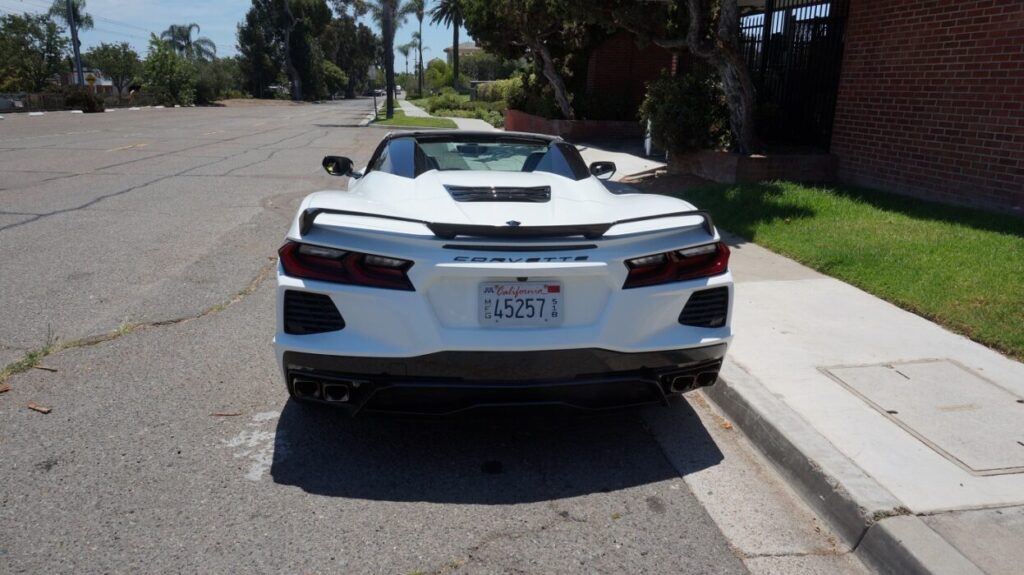 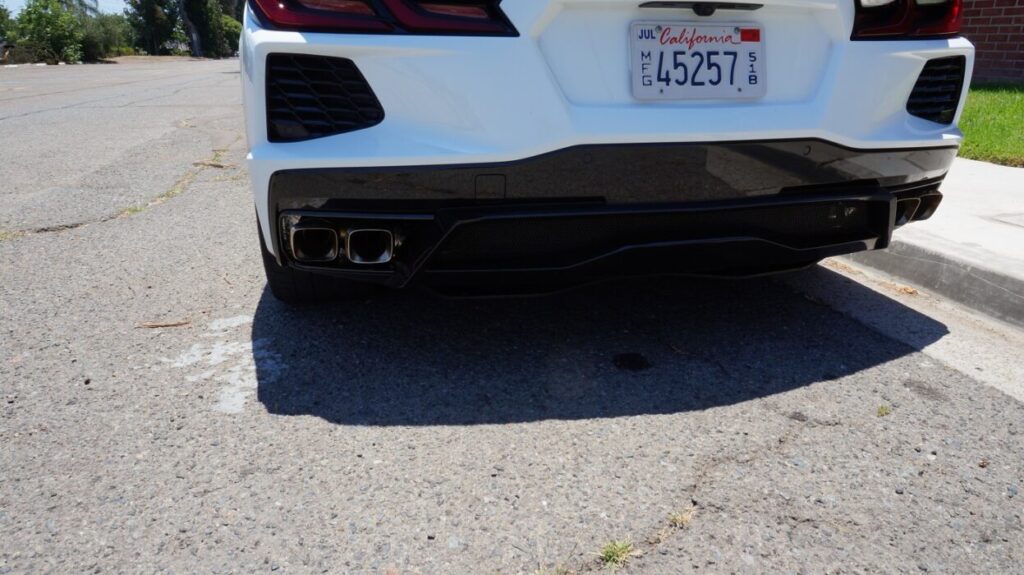 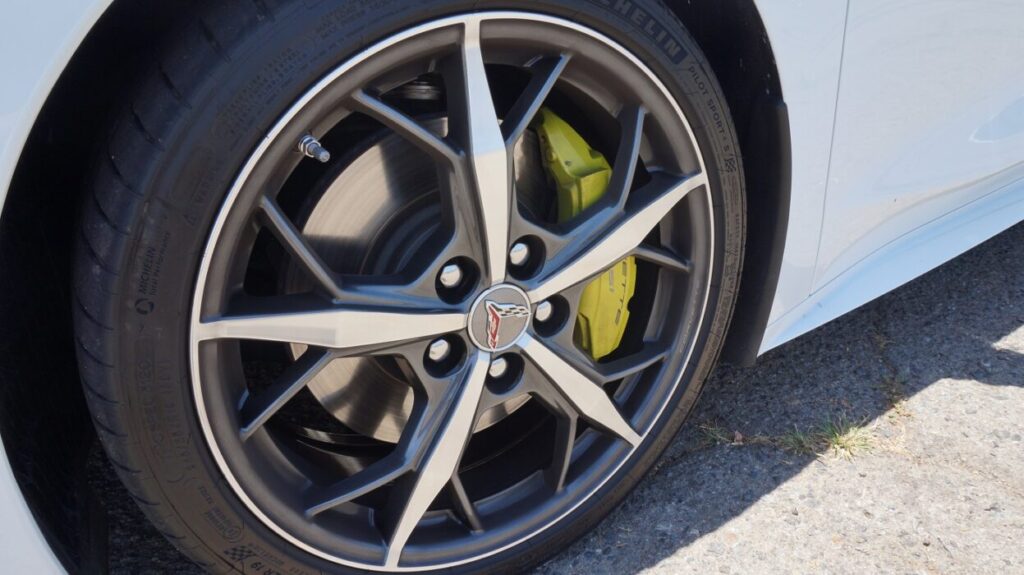 Except for the roof nothing has changed in the way the C8 drives, there’s an abundance of forward thrust from just about anywhere in the rev range, and on two-lane highways passing slower vehicles is a doddle. The chassis is very capable, and you feel it could handle a lot more power, which we are told will be coming soon, it’s quick but not ridiculously so. Handling is very safe and predictable, and grip is astounding, those 305/30s stick like limpets when you boot it out of a turn.

The standard eight-speed dual-clutch automatic is very impressive, in fact, one of my all-time favorites for the way it handles the power, dropping several cogs if sudden acceleration is needed or wafting around town in Tour mode, it’s super smooth. I never used the paddle shifters because of this, no need, just mash the gas pedal and hold on tight.

Speaking of drive modes, you can customize powertrain settings for the engine, transmission, steering, and brake feel beyond the presets in the other drive programs, which are Tour, Sport, and Track. The button is super handy since you can set the mode to Tour to appease passengers or if you are taking a trip to Vegas, and then once you are on your own, select Z and all hell breaks loose.

The C8 cuts into corners like a race car, the faster you go, the better the C8 feels and its cornering limits are virtually out of reach on public roads. True, steering feedback isn’t as good as some, but you’ll be grinning too much to notice. With the top down the C8 sounds magnificent, mash the throttle and hold to its max revs and the exhaust spits out a very loud crack which tends to startle pedestrians. You’re going to want to keep the top down since with it up the cabin is quite muted. Chevy doesn’t use fake sounds that are piped into the cabin.

All the controls are easy to use and light to the touch, the drive-by-wire brakes are very responsive and have a decent pedal feel all while delivering excellent fuel economy. For the week I had, I averaged 14.3 mpg, slightly worse than the coupe but on longer trips, I was seeing over 20 mpg. 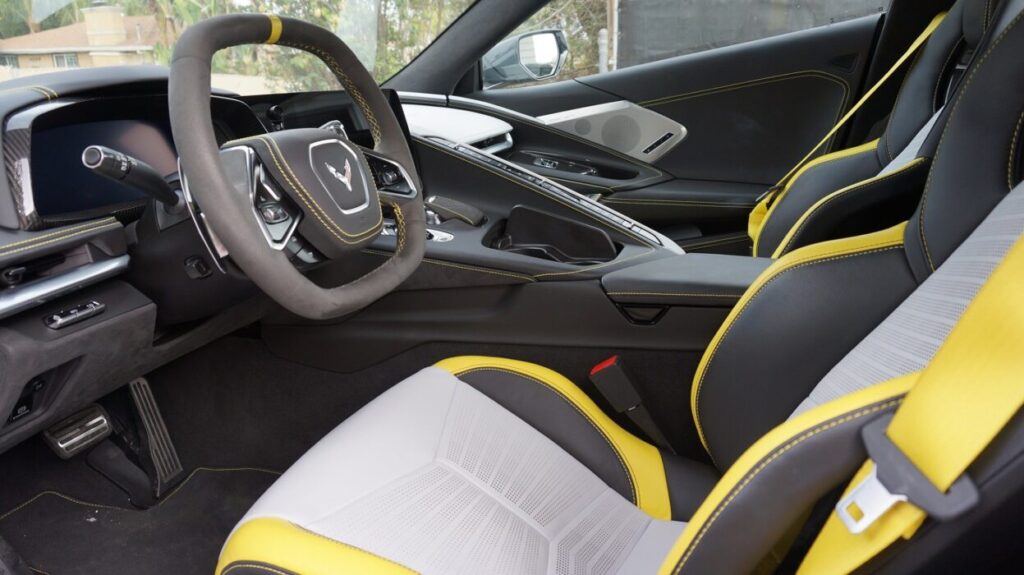 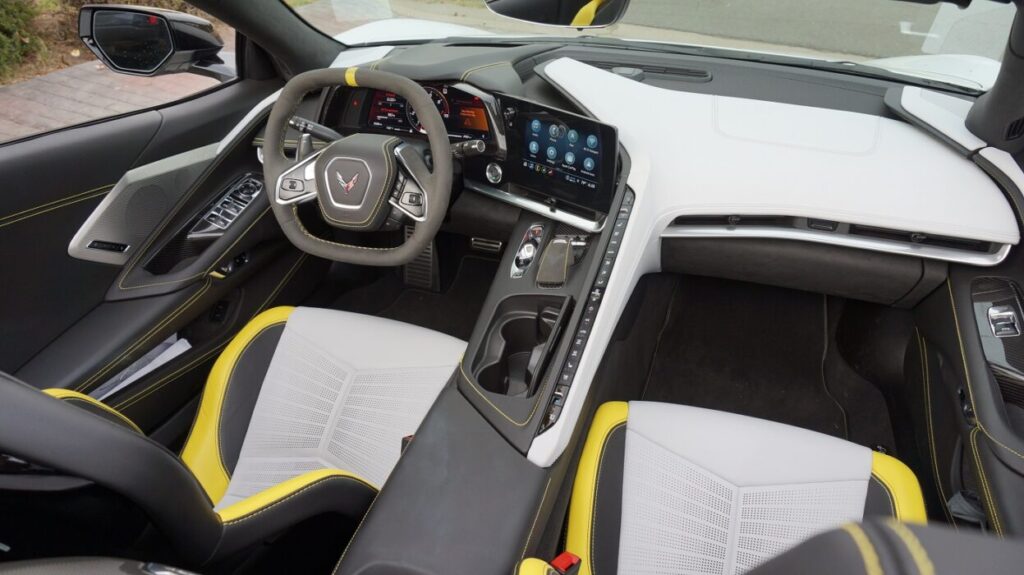 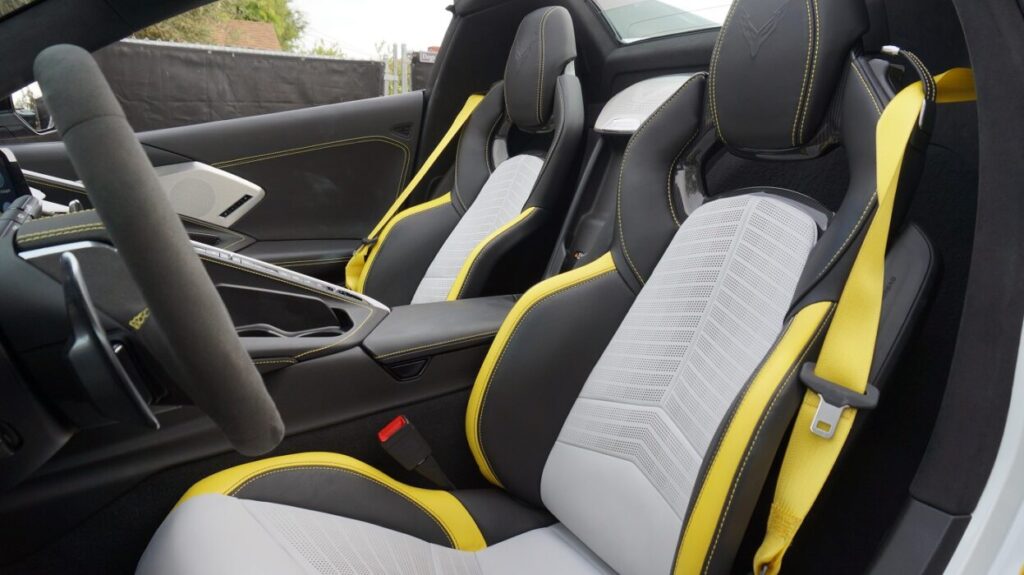 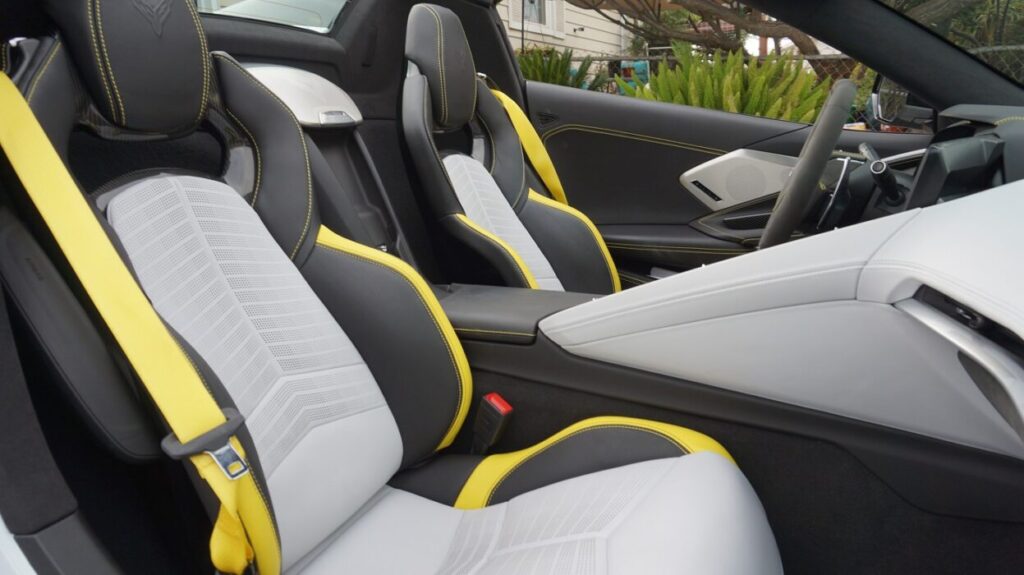 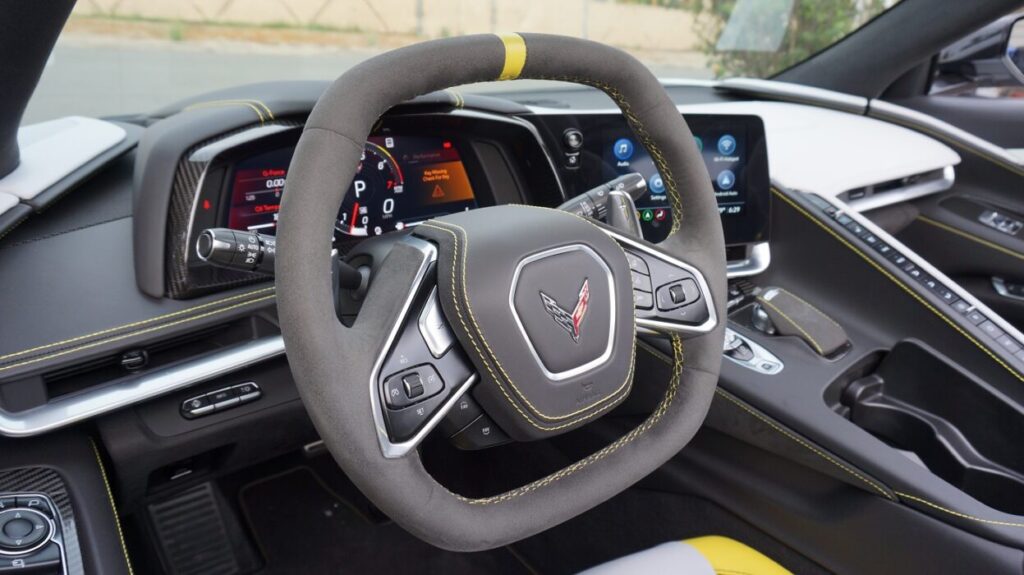 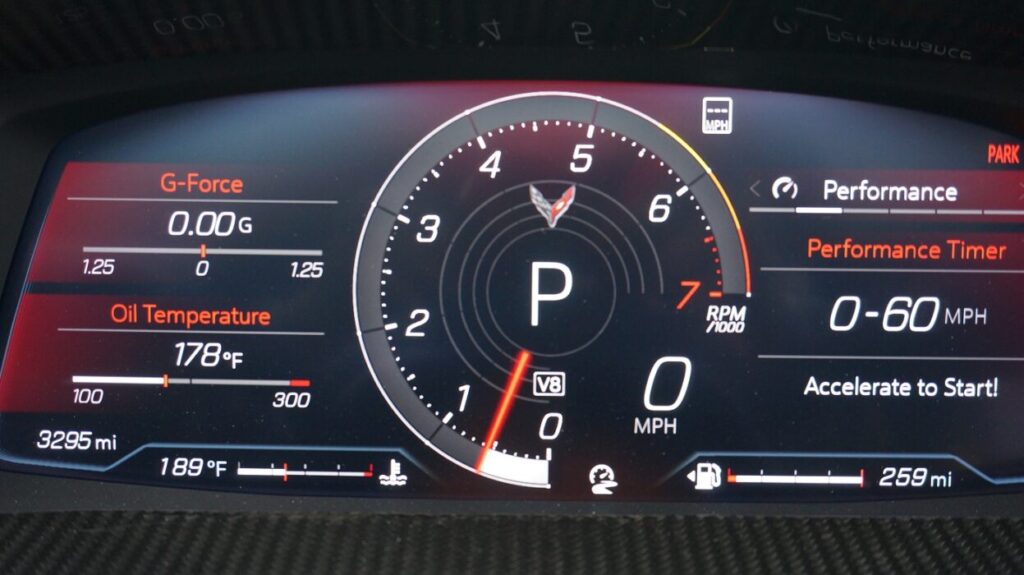 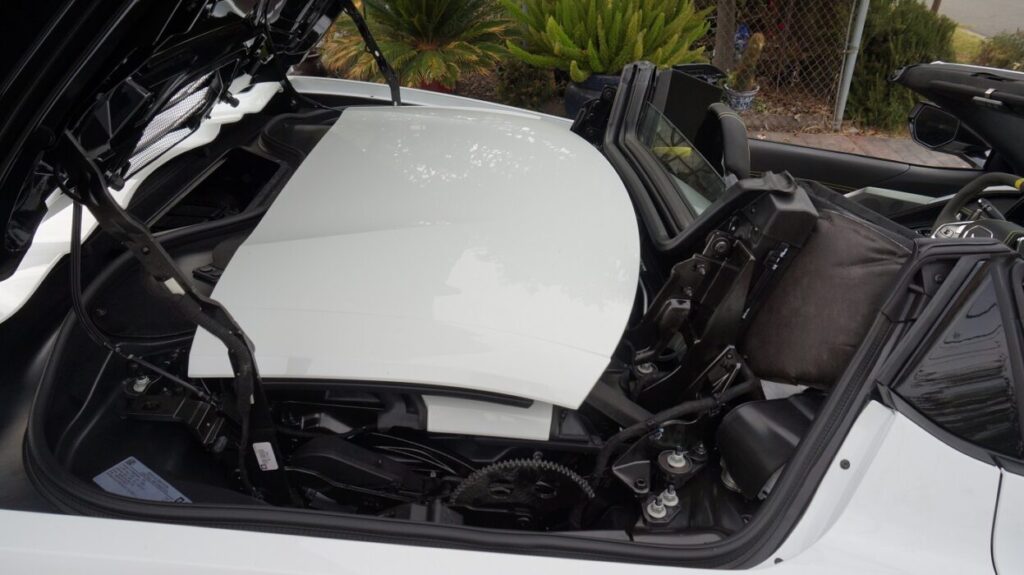 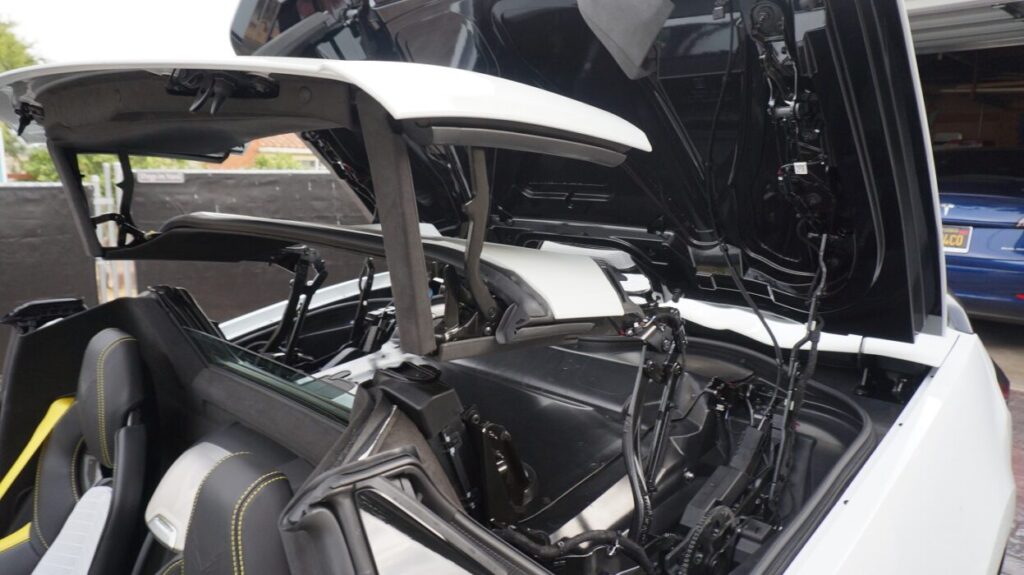 As the driver of the C8, the cabin/cockpit is an extremely nice place even more so in my 3LT equipped tester which had the excellent powered GT2 seats. When I drove the coupe, it had had the manually adjustable Competition Sport Bucket Seats which were very good but would have been really hot in the Summer. Thankfully the GT2 seats are both heated and cooled.
Ahead of the driver is a configurable dash that has all relevant info in easy-to-read, crisp and modern-looking graphics.

The wall of HVAC switches that separate you from the passenger is even trickier to use in the convertible if you have the roof open since it’s almost impossible to see if the lights are on or off. I had to use my hand to shield the sun so I could make adjustments, very tricky.

An 8-inch touchscreen runs the Chevrolet Infotainment 3 system, it looks good and is integrated into the dash design instead of looking like an iPad stuck on. It’s very quick and easy to has a bunch of features like Apple CarPlay, Android Auto, satellite radio and a 4G LTE Wi-Fi hotspot. The 14-speaker Bose sound system that came with my tester comes was very good but to be honest I spent most of the time topless listening to the exhaust.

Since drivers were accidentally opening the frunk with the key in their pocket, Chevy made it, so you have to do one short press and then hold the button for the frunk to open. There are still switches opens inside the car by the driver’s door pocket or under the front under the right headlight. The C8 has a decent amount of cargo space if you combine the frunk and rear cargo area together you get 12.6 cubic feet of space.

Once again Chevy has cracked it, making the C8 convertible one of the best and most affordable sports cars on sale today. I would totally spend the extra money on the convertible, it’s a no-brainer, I had so much fun with it for the week. Watch out for the low front splitter though, on the first day in my eagerness to drive it I exited my driveway and caught it and made a scratch, which I hate to do. I know I should have used the available nose lift, but my excitement got the better of me.