2020 Volkswagen Passsat 2.0T SEL Review – New, but only from the outside

Volkswagen is taking a gamble with the 2020 The Volkswagen 2.0T in that it’s banking on being able to sell enough of them despite a rapidly shrinking sedan market. Bravo for still offering it but in the case of the US version, we are missing out on the new platform currently offered in Europe and China. Instead we get the much older platform, dating back to 2012. It’s not all bad since from the roof down all the sheet metal is new and it’s an even better looking car than before.

It’s definitely more dynamic and the front end has more presence than the outgoing model, mostly responsible for the 1.7 inches of additional length. LED headlights are now standard across the range and they are very good, complementing the Passat’s chrome-lined grille. So far so good but does it make decent alternative to buying such mainstream cars as the Camry or the Accord?

Now with only one engine choice the Passat relies on the same turbocharged 2.0-liter inline-four that powers all Passat models. Like last year, the engine makes a mere 174 horsepower, however, the good news is torque has increased by 22 pound-feet for a total of 206.

With very little lag from its turbocharger and a torque peak of 1,700 rpm, the Passat’s power train does a pretty good job once it’s on the move. From a standstill it’s about a half a second quicker with 60 mph coming up in 7.8 seconds. The standard 6 speed automatic transmission is unobtrusive and shifts both ways with little fuss. If you want more speed though you are left wanting and I wish VW had programmed a little more horsepower into this engine, since fuel economy is worse than the outgoing model anyway. 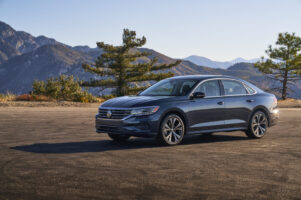 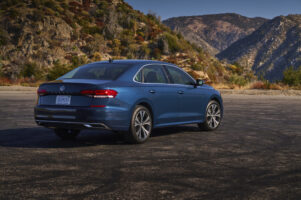 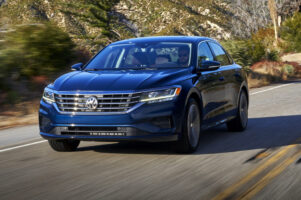 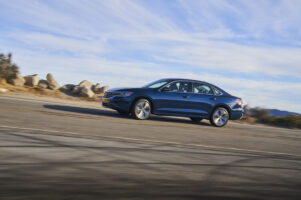 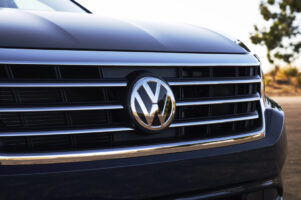 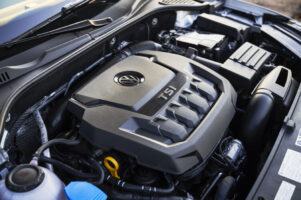 On the road the steering is well weighted and the car feels composed and planted in bends. We attacked a couple of sharp turns too fast and the car stayed its course, albeit with plenty of body roll, which helps make the car very comfortable and poised, the suspension soaking up all but the worst potholes.

Even though the Passat glides over bumps it does feel a tad floaty and somewhat  disconnected from the road. Steering is accurate and well-weighted, but like many others in this class­, it doesn’t offer as much feedback as we would want.

The overall driving experience is basically the same as the previous generation, which is to say it’s just OK. It’ll get you where you’re going with minimal fuss, but there’s little character ……..it’s not going to blow your socks off, it’s more of a steady as you go kind of car……and many people will be perfectly happy with that. 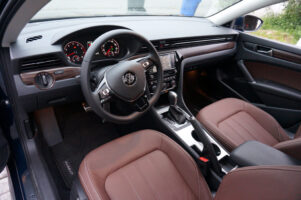 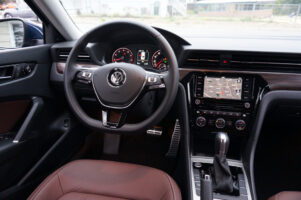 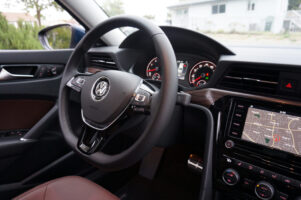 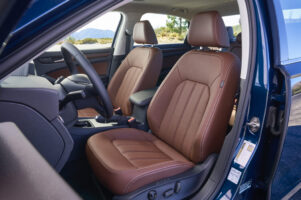 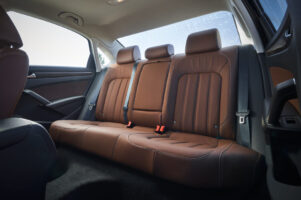 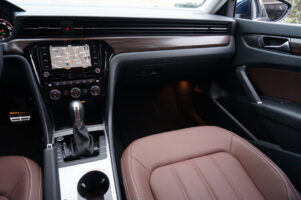 My SEL tester arrived in a pretty shade of blue, Tourmaline Blue, and Mauro Brown leather seats. The first thing you notice is there’s a lot of space in the Passat, especially for rear seat passengers, who have positively limo like legroom.

The dash has been redesigned to incorporate air vents that seem to span the width of the cabin, however the touch screen is still the rather small 6.3-inch unit instead of the 8.0-inch touch screen and 10.3-inch digital gauge cluster that Volkswagen offers in its smaller Jetta.

All the control fall easily to hand, but the front seats could use a tad more support. The cabin gives every appearance of having been made with higher quality materials, and this is a good thing.

The Passat is good value but unfortunately is no longer the value proposition that it used to be now there are many more options to choose from.  True the Honda Accord is more expensive, but is a much better drive and the Optima and Sonata are better value. I still like the VW Passat and I hope they keep offering it Stateside and eventually with the new MQB chassis., however, I somehow doubt that will happen. For now we’ll just have to accept the hand me downs.