I don’t want to hear any whining that the new Supra is really a BMW, well it is sort of, underneath the Supra shares a platform, running gear, engine, gearbox and large swathes of the interior with the latest BMW Z4. Fear not though, the Supra is the better car and much better looking. So why did Toyota choose BMW, well the old Supra had a straight six and since it would have been very expensive for Toyota since they don’t build them anymore. To do it themselves would have meant not only an all-new engine design, but a whole engine plant, which was clearly not viable so they  needed a partner, and the go to as far straight sixes are concerned was BMW. So now you know.

There is no doubt though that the Supra is way better looking than the Z4, it just looks so very Japanese, the curves and creases the perfect proportions and that inwardly curving roof are utterly special. My only gripe is the fake vents on the hood, doors, under the headlights and taillights, they could have made them smooth instead of trying to make them look real.

Speaking of the hood, underneath lies BMW’s B58, a turbocharged 3.0-liter inline-six, producing 335 horsepower and 365 lb-ft of torque (it feels like it has more) mated to ZF’s eight-speed automatic, the only available transmission. Acceleration is pretty quick with standstill to 60 takes a little under 4 seconds, the rear tires squirming as they try to find grip. There’s no question this car grips though, since it is shod with 275/35 ZR-19 Michelin Pilot Super Sports at the rear and 255/35 ZR-19 at the front.

Before I took delivery of the 2020 Toyota Supra, I had been driving around in a red Golf GTI and following that a red Audi TT RS, so I was hoping the Supra would be a different color……..it wasn’t, it was what Toyota calls Renaissance Red. 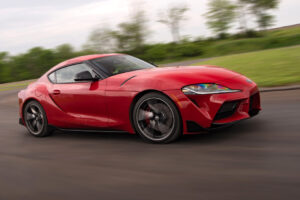 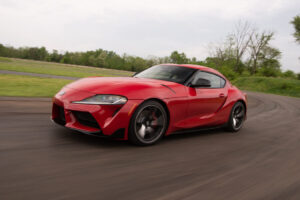 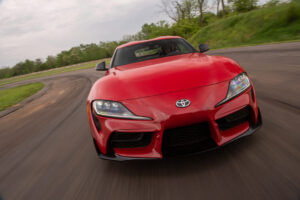 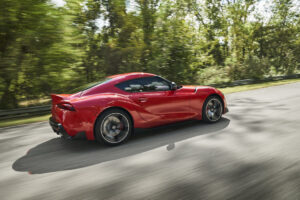 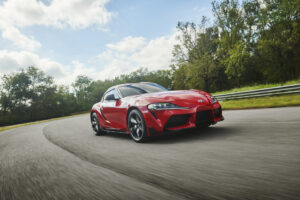 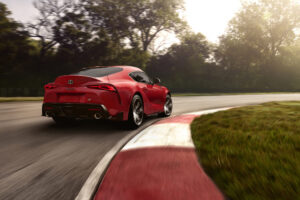 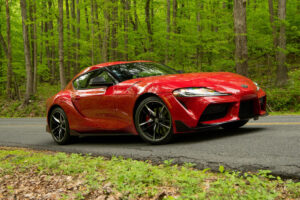 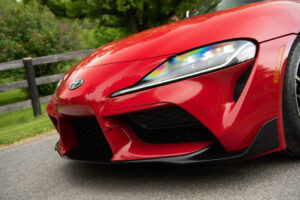 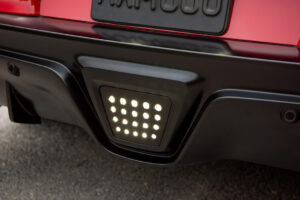 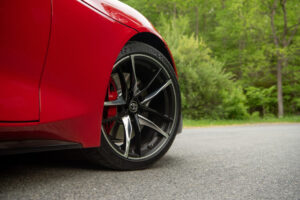 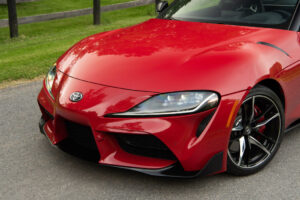 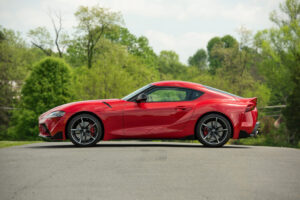 Once you step over the very wide sills and get the Supra going, it really is very good to drive better than my expectations in the 3 months I had to wait to drive it. The steering is very accurate, well weighted, and has some feel to it and is massively fun to flick through tight turns. Toyota has kept it simple with its drive mode options, there’s just two, Normal and Sport. Normal provides fairly serene forward motion and the engine note is fairly subdued, Sport provides the fun, the throttle, transmission, steering, exhaust, dampers, and limited-slip differential all become more aggressive.

This is one of the best driving cars period!

The first thing you notice in Sport mode is the snarl from the exhaust on the overrun, it’s positively addictive and I spent a lot of time letting off the gas just to hear it. It does sound somewhat louder inside the car though, piped in via the speakers no doubt, but it’s still grin inducing. As is darting from corner to corner, the 8 speed shifting seamlessly and utilizing the in-line six’s gobs of torque. Powering out from a bend elicits some wiggling from the rear end as the traction control attempts to keep you from going awry. The good news is, it doesn’t spoil the enjoyment at all. In fact the Supra doesn’t get flustered in any situation, this is one competent chassis.

It rides quite calmly too despite having a short wheelbase, mid corner bumps are well controlled, it simply doesn’t put a foot wrong in any situation. Thank the electronically actuated diff that transfers power laterally between the rear wheels…or individual wheel…..as and when the car needs it. Independent wheel braking helps prevents the tires from breaking loose, allowing more speed in the corners, and keeps over-steer to a minimum. Given the speed that the car can reach it has a decent set of stoppers, the front rotors are 13.7 inches in diameter and the rears are 13 inches and fade free during our aggressive driving stints. 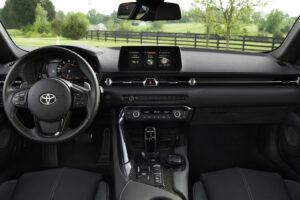 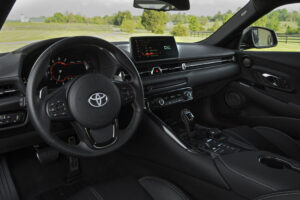 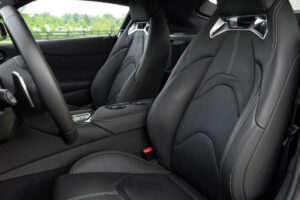 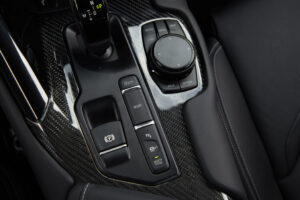 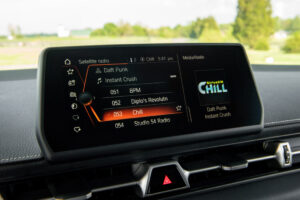 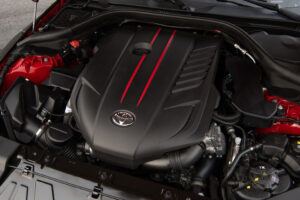 Let’s get past the obvious here, the Supra is a BMW inside which is no bad thing, the material quality is great and everything is well placed and easy to find. The only downside is space, the sills are very wide and those of a larger build will find it a squeeze. That said the seats are superb with multi way power including the side bolsters, to hold you in nice and snug and the driving position is great. It is bit difficult to see out especially over the shoulder, so it’s best to rely on the side view mirrors and blind spot monitoring , which comes with $1,195 Driver Assist Package.

With no rear seats there’s limited space for stuff, however, the rear trunk lid is a hatch and offers 10 cu feet of space and if you remove the rear parcel shelf your dog could enjoy the ride too.

This is truly one of the most enjoyable cars I have driven in the last few years and a relative bargain at $56K given that its main competition, the Porsche 718 Cayman, starts at $69,900. That’s a huge difference considering how good the new Supra is. Yes it’s a BMW at heart but Toyota has blessed the Supra with some real soul and driving dynamics that mean you’ll be grinning from ear to ear every time you drive it.