I’ve always liked the Lexus GS and especially the GS F even though it is a bit annoying, which I can easily overlook. Sadly, we found out this week that the GS will be no longer as Lexus plans to cut the nameplate from its lineup. Since I have the 2020 Lexus GS F this week it’ll be more of a roar than a last gasp. I am somewhat annoyed with Lexus for letting the GS languish for so long but at least I got one last drive.

Sure, it’s not the fastest sedan or the best handling but it does have greatness up its sleeve in that it uses a fantastic naturally aspirated V8, a rarity ultimately destined for the scrap heap. It’s 5.0 V8 in a world of 4.0 twin turbos, which pumps out 467 hp @ 7,100 rpm and 389 lb-ft @ 4,800 rpm driving the rear wheels via an 8-speed automatic transmission. That transmission is a delight and fills in the torque holes keeping the engine at its peak, especially in Sport S or Sport S+ mode. It doesn’t get any better than this.

This is the best Lexus sedan I’ve driven…….actually it’s one of the best sedans I’ve driven period!

0-60 is dispatched in 4.4 seconds, considerably behind its main rivals but god it sounds good doing it. Most of the people who say their M5 or their E63 is faster are missing the point here, the GS F doesn’t want to do drag races because they are boring, instead it wants to get out on the open road and provide the driver with a whole lot of fun. 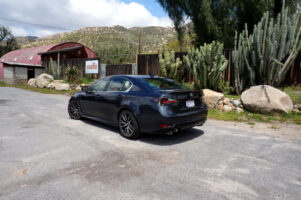 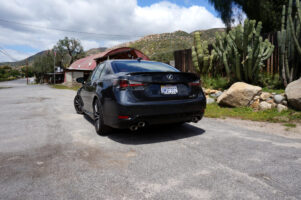 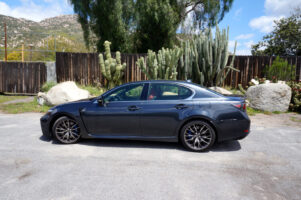 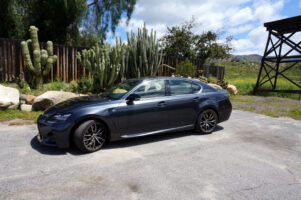 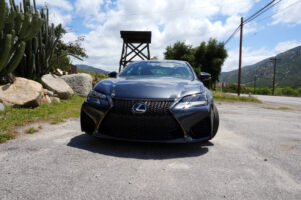 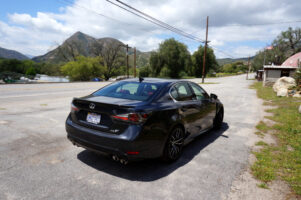 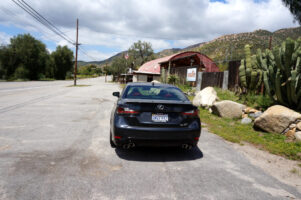 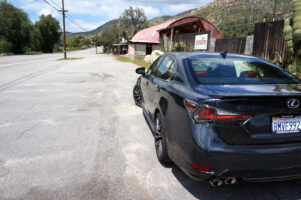 But is it fun?

It certainly is, but you’ll have to twirl a knob and push a button selector in the center console to make it do things you wouldn’t expect it to do. Driven in Eco or Standard mode the GS F does a remarkable impression of a GS 350, the engine quietly warbles along, the suspension is compliant and unless you push the gas down hard it remains as peaceful as the eye of a hurricane. Explore its inner demon, however, and this Lexus knows how to have fun.

This can be easily achieved by selecting Track mode by pushing the TVD (torque vectoring differential) mode which is right next to the Snow button, something I would never use here in Southern California. Then you simply select Sport + and away you go.

The suspension gets sharper and all of a sudden you can hear that V8 noise inside the cabin. True it’s piped in but that avoids scaring pedestrians silly, that’s not the Lexus way. Anyway, I digress……once on the move the suspension allows for a modicum of body roll but that’s good as it helps to keep the Pilot Super Sports planted.

Dive into a corner and the standard Torque Vectoring Differential system kicks in by precisely controlling torque to each rear wheel through the engagement of a multi-plate clutch. It operates as quickly as 1/1000th of a second, whether the accelerator is pressed or not, based on data including throttle input, braking, yaw rate, longitudinal and lateral G-force. It’s tremendous.

Under-steer is all but eliminated but the GS F never feels out of control even under sharp cornering and the car communicates its limits without adding drama. I didn’t use the Mark Levinson sound system since the V8 wail from the 5.0 was utterly intoxicating. Yes, it’s that good.

The steering is about as good as it gets, confidence-inspiring and has plenty of feedback while the brakes provided excellent fade free stops time after time. In fact, on one occasion due to heavy stopped traffic I had to stomp on them so hard my biggest worry was that someone behind wouldn’t be able to stop in time. 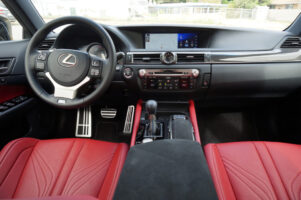 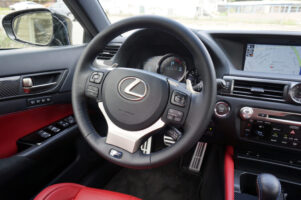 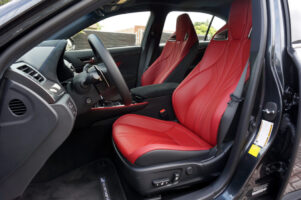 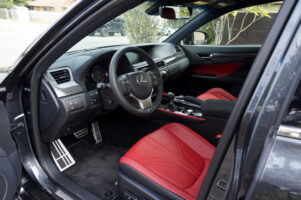 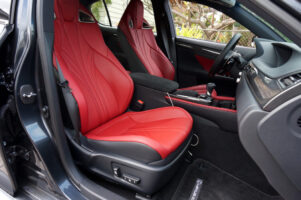 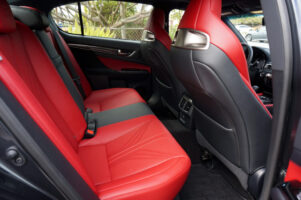 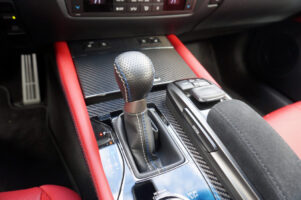 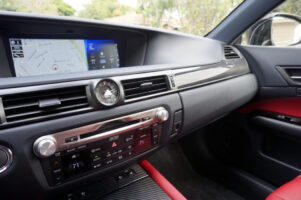 Slip into the very comfortable F performance seats and soak up the luxury, this Lexus smells good and not just the new car smell because it hardly had any miles on it, but the rich earthy smell of tanned hides. The drivers chair has 10-way power and has plenty of bolstering for those high-speed cornering maneuvers.
Lexus’s premium infotainment system with a 12.3 in screen, a touch pad controller, sat nav, and a multimedia interface looks super cool, but ultimately fails on usability, it’s too fiddly and you become quite frantic trying to do something simple like tune a radio station. I tend to leave it alone.
The dash is an interesting mixture of analog and digital gauges that seem odd at first but works well. The large digital tachometer changes when you switch drive modes going from cool blue in Eco mode to red in Sport + mode, which makes perfect sense.

It’s a flawed old school charmer and I like that

In some ways the GS F is too clever for its own good but in others it’s magnificent. When we tire of driving around in boxes with wheels that they like to call crossovers, let’s hope the sedan gets another chance, especially the sportier kind. You should drive one while you can, buy one if you can afford one, because infotainment issues aside this car will create a memory you will never forget.

When Lexus came to collect my 2020 Lexus GS F after a truly memorable week and a lot of gas, I averaged 12.7 mpg, I went back into the house and sobbed into my now cold oatmeal.