As expected the new 2020 Chevrolet Corvette is nothing less than stunning to look at, a hint of Mclaren and Ferrari but very Corvette and of course now with mid engine configuration, the way a true sports car should be.

Chevy put on quite a show at the Tustin hangar last night and the big reveal we have been waiting months for arrived with 3 cars speeding from the far end of the hangar into view. Spectacular.

Great show but how’s the car, well stunning to look at, and on closer inspection well made, the cabin is tight but the materials are of a decent quality. We’ll have to wait for a production model to test to really get a good idea. The new C8 is powered by a new version of GM’s 6.2-liter “small block” V-8, the LT2. Now it produces 495 horsepower and 470 lb-ft of torque, giving it more power and torque than the previous C7’s LT1 V-8 engine.

The only transmission available is an eight-speed dual-clutch automatic transmission which Chevy claims will launch the car from 0-60 in less than 3 seconds….incredible considering that prices will start at under $60,000.

Also and on show at the hangar was the optional Z51 Performance Package but Chevy hasn’t divulged pricing on that package just yet.

Its chassis is built from mixed-materials and uses die-cast aluminum components. The entry-level model will weigh approximately 3,366 pounds. 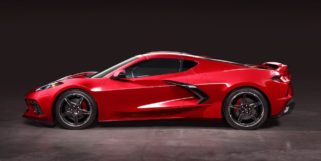 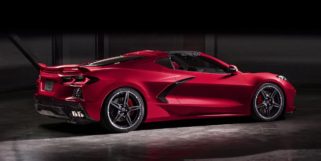 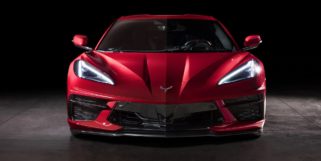 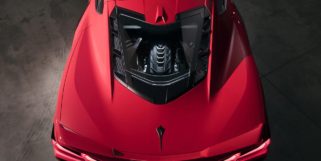 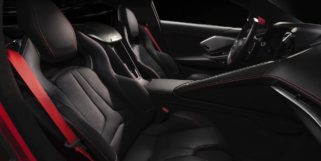 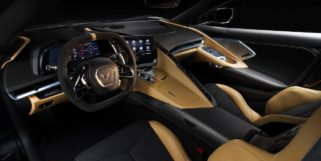 There are six drive modes that modify the Corvette’s drive systems: Weather, Tour, Sport, Track, MyMode, and Z mode. The first four are a carryover from the C7, MyMode allows drivers to set particular settings, and Z mode allows drivers add their track settings with one push of a button.

It goes up and down

The new Corvette sits quite low which means speed bumps or uneven driveways are somewhat of a peril…not any more…..it has a system that raises the car and then can memorize the exact GPS location of the bump in up to 1,000 different places. The driver doesn’t need to do anything.

The interior features a squared-off steering wheel, a full-digital instrument cluster, a central tablet-style display angled toward the driver and a long row of buttons and toggles situated on a raised ridge between the seats. These are mainly the HVAC controls and the whole thing has been designed for zero interference from the passenger

To provide better rearward visibility a rearview mirror that uses feed from a wide-angle camera on the roof , and a e a forward-facing camera can be used to film track sessions with the Performance Data Recorder.

I personally can’t wait to drive this car, I’ve never been a die hard Corvette fan but this one might just change my mind and of course Chevy is hoping many others will too.