You have to give Cadillac credit for sticking to its guns and staying in the premium-sedan game (despite decreasing sales) when many others have given up and concentrated on Crossovers and SUVs. I’m glad they have because the new 2020 Cadillac CT5 550T is a good solid effort. We just tested the CT4 with the bigger engine and found it to be very likable, except the 2.7 liter four-cylinder is quite noisy in Sport mode.

I was therefore eager to try out the CT4’s bigger sibling and was hoping to get the optional twin-turbo six and 10-speed auto combo. My wish came true and my Black Raven painted tester arrived sporting a Sedona Sauvage (light brown) interior and the optional V6 engine.

It’s a handsome looker too, I like the fastback design, I just wish it had a rear hatch instead of a standard trunk lid, that would provide much easier access to the rear cargo area. Other than the strange c-pillar design the CT5 looks the part.

The CT5 is aimed at buyers of the Audi A4, BMW 3 Series, and Mercedes-Benz C-Class, and although it’s a bit shorter, yet roomier, than the CTS sedan it replaced, it is larger than these competitors. 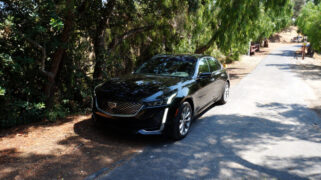 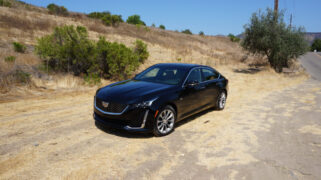 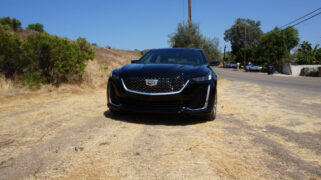 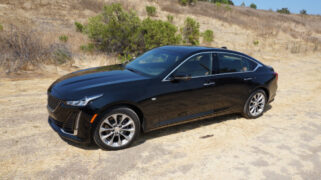 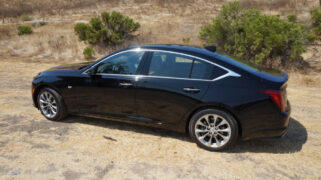 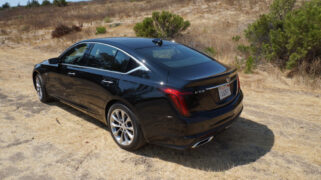 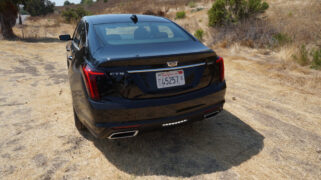 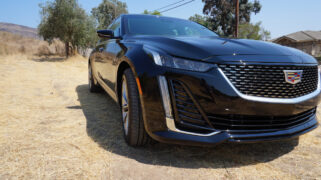 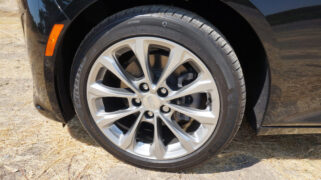 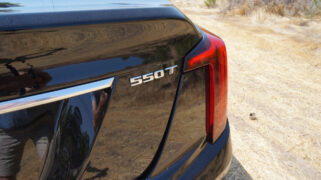 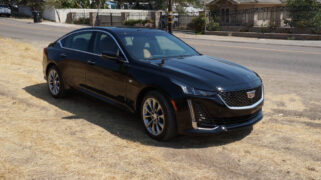 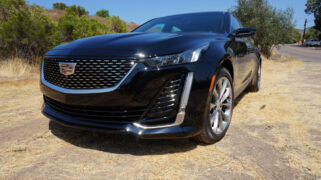 The 3.0-liter 6 cylinder is a gem, it rips through its 10 speeds like a machine gun and the torque is always available no matter where or when you need it. It’s positively grin-inducing.  It sounds great in Sport mode too, snarling and popping as it goes and doesn’t ever sound strained even at full chat.

Drive in a more modest manner and the Sports Performance Shift system turns off (a small green cog in the dash tells you when it’s on) and it becomes quite content to warble along in a very serene manner. There’s no turbo lag either, I’m not sure how GM does it, but Audi could learn a thing or two here, this engine pulls like a train. Can you imagine this car with the 6.2-liter supercharged V8 under the hood?

It rides on a rear-wheel-drive platform, but you can get all-wheel drive for an extra $3090, I wouldn’t bother, I don’t think it needs since the traction control keeps you out of trouble. The ride is relaxed and you do feel this car has been set up with luxury in mind so it can float a little over undulations but on the plus side, the suspension absorbs most of the rough pavement thrown at it. If you want to feel more planted, then opt for the CT5 V with its sportier adaptive suspension.

I found the steering to be heavy around town but the set up pays dividends when you reach higher speeds, the CT5 goes were you point it and it all feels well under control from the helm. The brakes are good but given this car’s performance, I would prefer to see a set of Brembos instead, just for peace of mind.

Don’t except hybrid levels of fuel economy here, the twin-turbo likes to drink (premium), we averaged 15.7 mpg the week, the EPA says it gets 26 mpg highway which would require the kind of restraint we simply don’t have. 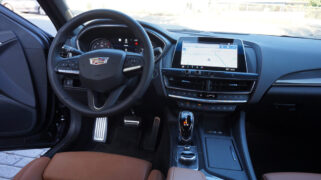 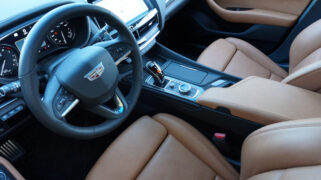 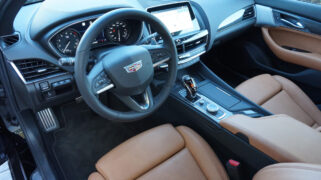 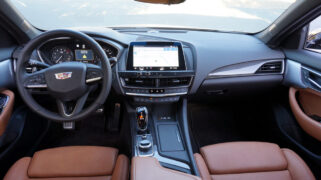 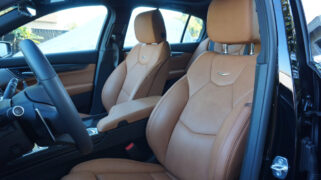 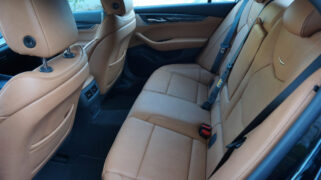 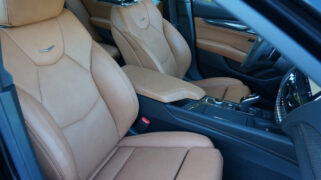 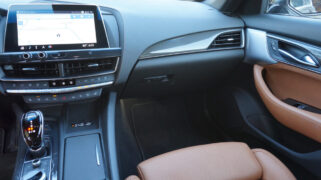 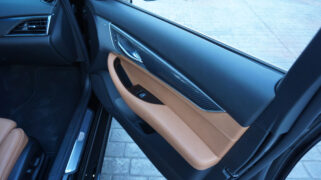 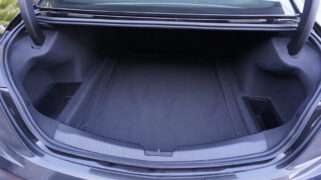 You are welcome into the CT5 with heated, cooled, and (optional) massage sport seats, leather-appointed, of course. My tester had the adjustable side bolsters which make for a very comfortable seating arrangement. The driver is greeted with two analog gauges, a tachometer and speedometer, and a central digital display for audio info and driver aid monitoring. That central piece needs an update, it looks somewhat clunky, but the rest is pretty good.

Cadillac’s Cue infotainment system has been updated, it responds quickly and menus are clearly marked and easily scrolled through. Apple CarPlay and Android Auto are standard the Caddy’s infotainment is much easier to use now that physical buttons and knobs are available for the touch screen challenged.

Most of the interior, which is a mixture of wood, aluminum, and/or carbon fiber gives it a sense of luxury, however, it’s not quite up to Audi levels yet, some harder plastics reside below knee level.

My tester had a couple of options on top of the 3.0 twin turbo 6 ($3,500), the Platinum Package ($8,300) which includes the aforementioned power seat option, extra soft leather, Ultraview Sunroof, Lighting Package, Reverse Auto Braking, Leather Steering wheel with Magnesium Shifters and an interior movement sensor which monitors the interior of the vehicle with ultrasonic waves to prevent possible theft.

I like the fact that Cadillac allows you to opt for the bigger engine without forcing you into an entire performance package. If you want that then you can simply buy the V version. Spec out the V6 and the car is a relative bargain even if you go crazy on the options. I would definitely get the V6 and drop the Driver Awareness Package ($1,300) though.

This car bodes well for the upcoming hot V version, which according to all the swirling rumors, may have the 640 hp V8, and if it does that will be magnificent. In the meantime, this one is a very good car.