Last year, the Dodge Challenger outsold the Chevrolet Camaro by a hefty margin, and through the first quarter of 2019 it’s still hanging on to the number two spot behind Ford . Credit must go to Dodge for continually offering very interesting packages to keep the old Challenger relevant. It’s main competitors have offered several major revisions in the same time frame. The Hellcat, Demon and Redeye spring to mind as great ways to keep people visiting dealerships.

I remember the last Scat Pack I drove back in 2015 and my question to the driver who dropped it off was,  “Did you bring a spare set of tires” because I knew the 2015 Challenger would have traction issues when I saw it was only wearing 245 tires on the rear. No such worries this time when Dodge dropped off the 2019 Dodge Challenger Scat Pack Widebody since it was wearing massive 305/35 ZR20 P Zero summer tires. Grip was probably not going to be an issue and the fun factor higher thanks to a 6-speed manual transmission.

The 2019 Dodge Challenger R/T Scat Pack, has an unchanged naturally aspirated, 392-cubic-inch  V-8 (6.4 liter) and produces 485 hp @ 6000 rpm and 475 lb-ft @ 4200 rpm. It helps push this massive automobile to sixty in 4.8 seconds, or at least that’s the best we could coax out of it. Since the SRT with this engine is now discontinued, The Widebody gets the adaptive dampers and Race and Sport settings for suspension and steering. I left it in Sport mode and traction control on and left the rest of the control to my left and right feet.

Adding to all the enjoyment is the 6-speed transmission which has quite a heavy feel and mechanical shifts, each requiring definite effort. Gears one through four are closely spaced for acceleration,  five and six seem to be much taller and you have to downshift quite a lot on the highway. For this reason I left it in 4 on highways and paid the price at the pump by averaging 12.5 mpg for the week. Ouch! 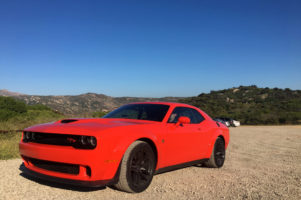 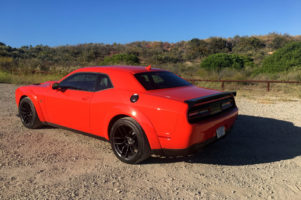 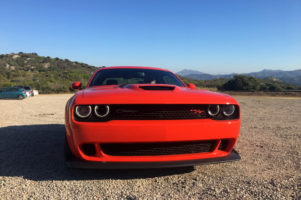 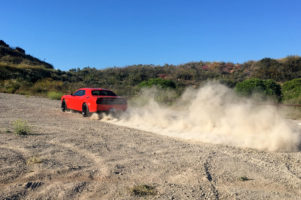 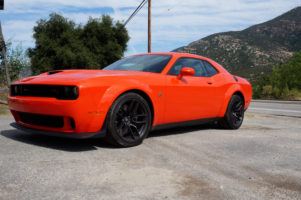 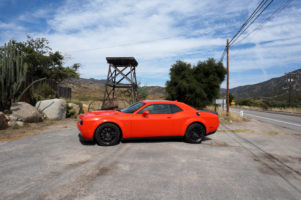 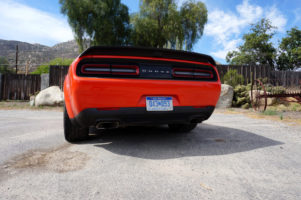 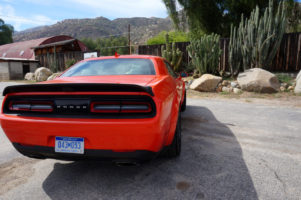 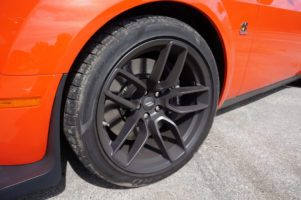 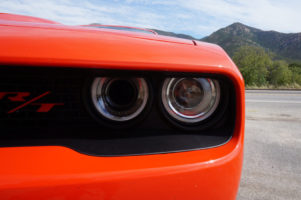 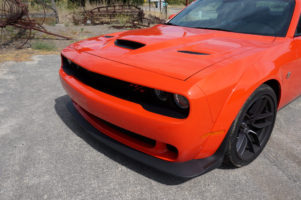 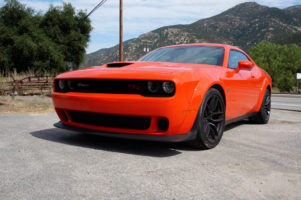 What is a Scat Pack?

In 1968, Chrysler Corporation began an ad campaign featuring a cartoon bee with an engine on its back featuring models called the “Scat Pack”. The Coronet R/T, Super Bee, Dart GTS, and Charger R/T received bumble-bee stripes (two thin stripes framing two thick stripes). The stripes were standard on the R/Ts and came in red, white, or black, but could be deleted at no extra cost. In order for a car to enter the Scat Pack it had to be capable of running the quarter mile in the 14s (14.99 or faster). In 2013 Dodge announced the reintroduced the Scat Pack as optional kits for the 2014 Dodge Challenger, Charger, and Dart, in order to mark the 45th anniversary of the original Scat Pack.

Going round the bend

First impressions are it makes a lot of noise, great when you are at ten/tenths on a wide open road but the boom can become a little tedious after a while and unlike some performance cars there’s no way to turn it down. That said at full chat it’s a grin inducing drive and the added Widebody causes passers to do a double take, is it a Hellcat?. No but it looks like one from afar.

With 12-inch-wide tires I can assure you that this Challenger generates a lot of cornering grip, it’s very impressive and very composed going into and coming out of bends. Even in tight turns in 2nd or 3rd gear it is quite remarkable considering its size and weight. The upgraded anti-roll bars, stiffer springs and three-mode adaptive dampers of this Widebody version are the reason why it feels so planted. Add to that and unless you are brutal with the throttle at a standstill, traction is very good. I remember the 2015 version I tested would spin its wheel at the drop of a hat.

Push really hard into a corner though and it will under steer, but nothing that a dab of throttle won’t correct. The ride is on the hard side but it’s a small price to pay to keep the car controlled. The big Brembos upfront are excellent stoppers and were completely fade free even during harsh testing. 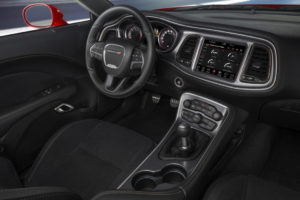 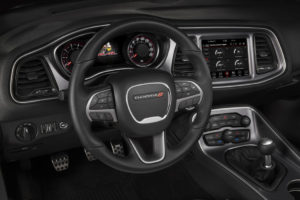 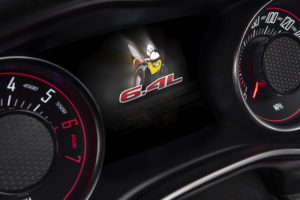 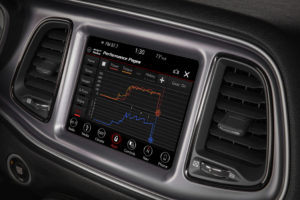 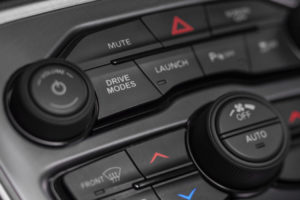 Seats are comfortable and hold you in place well and in my tester were leather appointed with multi way power. FCA’s UConnect infotainment system is still one of the best (Lexus take note) is easy and intuitive to use. Bluetooth set up is simple and for the most part the touch screen is simple to use. I really liked the old school speedometer and overall driving position except the gas pedal has a very long travel so getting situated ideally was a bit of a fumble in this manual version.

The Challenger’s touch screen also has Performance Apps fun built in  an Electronic line lock, which holds the front brakes so you can do burnouts, as well as launch control with an adjustable rev limit, are newly optional this year. Various gauges in the instrument cluster and infotainment screen allow for monitoring details like engine output and fluid temperatures, while various timers permit measuring acceleration, braking and G-force figures.

The Challenger impressed me with its brute force, bad-ass attitude, and ear-splitting  exhaust note. The Scat Pack is seriously loud, all the time.  There’s no way to creep home in the early hours without waking up the neighbors. This is car is a lot of fun it almost seems illegal, which in the eyes of the law it may well be, as we spent most of our time exceeding posted speed limits. The optional eight-speed automatic would probably be the more user friendly daily driver option it just isn’t as much fun.

Go crazy on the options and the $39k base price soon becomes $55k, especially adding the $6,000 Widebody, so I would drop the Sunroof, the Harmon Kardon, the Driver Convenience Package and the Technology group and save myself  $3,100……..and move to Oklahoma where the gas is cheaper…….well maybe not.