Unlike it’s truck-based ancestors, the S-10 Blazers from the ’80s and ’90s, this one is a crossover based on the same platform as a Cadillac XT5 and GMC Acadia and it slots neatly between the Chevy Equinox and Traverse in size. This Blazer is a departure from those old models, last seen in 2005, now it’s a mid-size, two-row, five-passenger crossover. It’s aimed squarely at folks looking for an upscale crossover that’s a step up from the usual milquetoast offerings.

There are six trim levels to choose from, ranging from a front-wheel drive base model to the luxurious Premier, which as it happens was the tester I had for a week. Prices start at $29,995, which is par for this segment, however, my loaded Premier tester was a shade under 50,000, which is in line with the competition in this segment.

It’s a looker too, angular and aggressive and has those Camaro inspired front lights to finish off the look. At the rear things soften up although its wide stance makes it look a lot sportier than its rivals, giving a significant presence on the road.

The Blazer comes with two engine options. The two low-end Blazer trims offer a direct-injected, 2.5-liter four-cylinder engine rated at 193 horsepower and 188 lb-ft. This engine is paired with a nine-speed automatic transmission, and is offered only in front-wheel drive configuration.  Higher trims get a 3.6-liter V6 rated at 308 hp and 270 lb-ft. of torque. My 2019 Chevrolet Blazer tester, being a Premier, was fitted with the V6 and it makes for decent forward momentum since 0-60 takes 6.3 seconds. The V6 is paired with the same 9-speed auto and it’s smooth for the most part but can be a bit slow to kick down when you really need it. The absence of paddle shifters doesn’t help here.

The standard AWD setup is fairly conventional, with a manually selectable front-drive mode that disconnects the rear axle for better fuel economy. The upgraded system in the top RS and Premier models has the same torque-vectoring rear drive unit found in other GM products that can apportion torque side to side to each individual rear wheel. 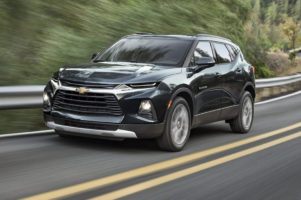 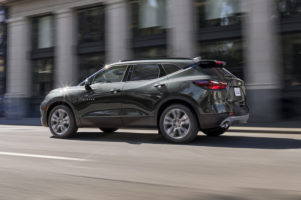 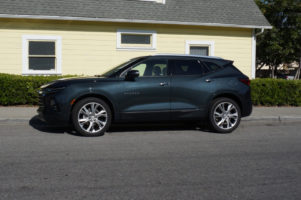 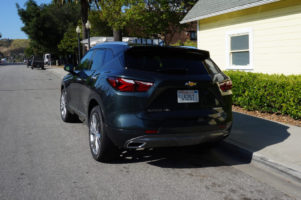 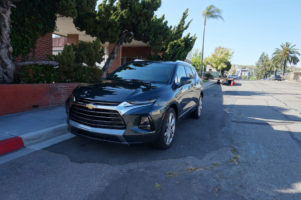 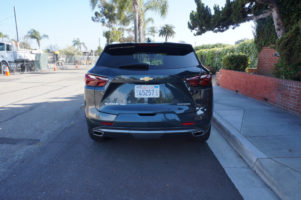 First things first it doesn’t go off-road and makes no pretense to, it’s been designed for pavement and it shows, as my tester had the 21 inch pearl nickel aluminum wheels wrapped with 265/35R-21 Continental CrossContact LX Sport all-season tires. Wearing those shoes the new Blazer does a pretty good impression of a sports sedan only with fairly numb steering. The rest is all very good, you can blast along, hit a turn at decent speeds and the car simply obeys, it’s only at the limit that you feel the steering weight up and under steer happen. Thanks to a MacPherson strut front and a five-link rear, the Blazer is very composed when pushing hard through a curve, it stays flat and can carry more speed than you would expect. Brakes are very good but not as good as the Brembos on offer in our recent test of the Buick Regal GS, nevertheless they provided competent stopping power when needed.

Of course the Blazer is still a tall riding crossover and that makes it compromised to a degree, but versus the competition it does provide more fun factor and that is something lacking in the current crop of crossovers available. 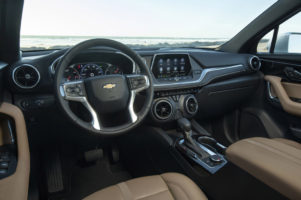 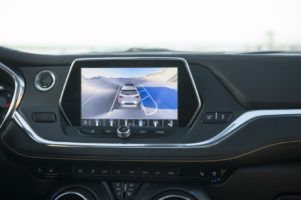 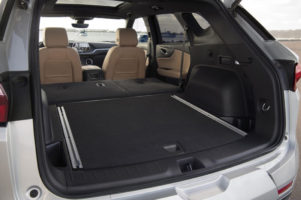 The interior inspiration comes from the Chevrolet Camaro’s cabin, the huge vents will be familiar and turning the wheel is a nice touch to change the temperature. which isn’t the first interior design we’d borrow from given its wonky ergonomics. The Blazer’s packaging, however, allowed designers extra space to fine-tune the execution, with the only real point of weirdness being the circular air vents mounted low on the center stack. Forward visibility is good thanks to the side quarter-windows, and the chunky D-pillars don’t impede the rear view too badly.

Material quality is decent for this class, though, and all appears to bolted together correctly, with no rattles or squeaks while I had the car. GM’s latest infotainment system, Infotainment 3, is full of connectivity features, responds quickly to inputs, and has very organized menus. The 8-inch touch screen has Apple Car Play, Android Auto, 4G LTE in-car Wi-Fi, OnStar and there are four USB ports around the interior.

The front seats aren’t as good as the recently tested Cadillac XT4, but they are comfortable and have both cooling and heating for both driver and passenger. The cabin’s space is well utilized, although the roof line does impede cargo space somewhat. Legroom and headroom in the front and rear is good and the multi-adjustable rear seats slide, recline, and fold flat to create a perfectly even cargo floor.

The 2019 Chevrolet Blazer is a solid midsize SUV that provides a better than average car-like driving experience from behind the wheel than anything else in the segment. It certainly looks good too and since car buying is such an emotional experience, this should do it for a lot of people. The Blazer makes a strong case for itself with a capable driving experience, rakish styling, and a very nice interior. I would probably go for the RS which has stiffer damping and a quicker steering ratio and it’s a bit cheaper than the Premier.