The Jeep Grand Cherokee is the the second-most popular midsize SUV in the United States and for good reason, it drives well both on and off road and has a broad appeal. So back in 2007 Jeep came up with the SRT version which at the time, made as much sense as a screen door on a submarine, at least until you drove it. Since then they have tweaked and massaged it into one of the most fun cars I have ever driven.

Up till the expected release of the Trailhawk, the almost official Hellcat version of the Grand Cherokee SRT, which will have an expected 707 horsepower from a supercharged 6.2-liter V8, the 2017 Grand Cherokee SRT here is the most powerful yet.

In 2014 the old five-speed automatic was replaced with the excellent eight-speed gearbox and it transformed the way the car drove as well as  improve fuel economy, although it’s still a thirsty beast.  Acceleration also improved with the all important 0-60 mph sprint dispatched half a second quicker. We did a couple of runs, with our car wearing 285/45 Pirelli P-Zeros and launched it to 60 in 4.6 seconds. It’s not the fastest SUV on the planet but it makes up for this by being a grin inducing drive. 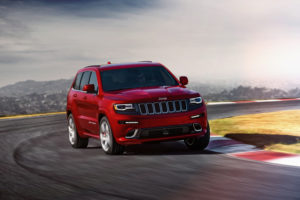 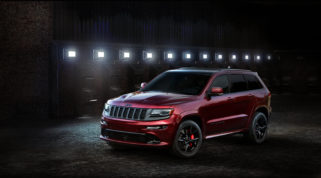 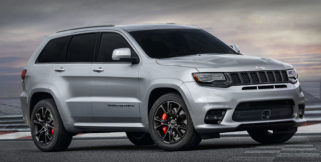 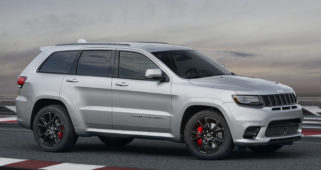 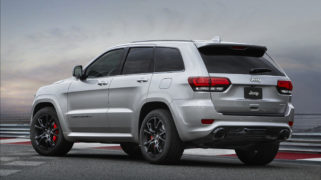 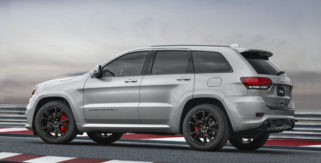 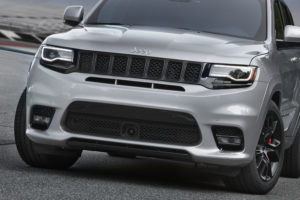 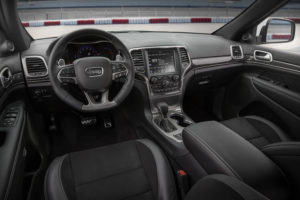 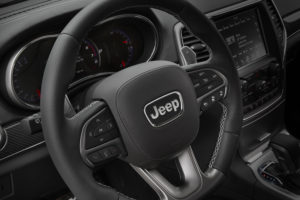 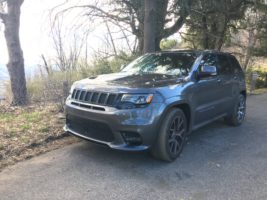 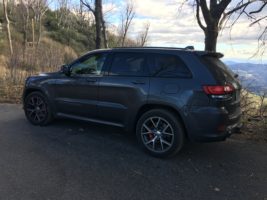 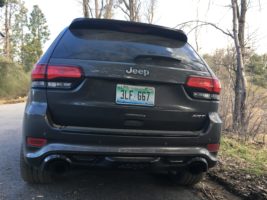 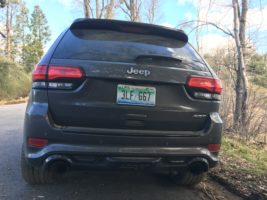 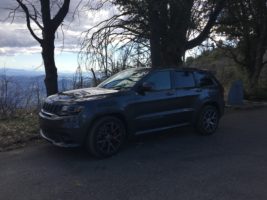 I hit the streets of San Diego and immediately there was a problem, I couldn’t stop myself from mashing the right pedal at every stop light, such was the instantaneous throttle response, with no lag from turbochargers and all wheel drive to put the power down. I found myself doing this a lot. This had a catastrophic effect on my average fuel economy though with 10.8 mpg showing after a day of in town driving. Things improved over the course of the week and I finished up at an average 12.8 mpg, still short of the EPA 15 mpg. Still, despite having to fill up the beast 3 times I couldn’t have had more fun in any other SUV. Push hard and the eight-speed automatic dispatches ratios with ease and as we have said before this transmission is so much better then the outgoing 5 speed auto.

With it’s adaptive dampers and big six-piston Brembo brakes, the Grand Cherokee handles the twisty bits with ease, never feeling tall and unstable, just fantastically planted. Only in very tight turns do you feel the weight but it’s all very controlled. The brakes are good too, not grabby and very effective at hauling the SRT from high speed. We kept it in Sport almost all the time and the ride feels just fine even over San Diego’s many potholes.

I took the SRT up Nate Harrison Grade, a truck trail on the West side of Palomar Mountain. It’s paved for a couple of miles, then compacted DG. It climbs almost 4,700 feet to pick up the Hwy S7. It coped well despite running on those P-Zeros and once at the summit came into its own, devouring straights and charging into corners at insane speeds. The Grand Cherokee SRT offers seriously quick straight-line acceleration, incredibly responsive handling, superb stopping power and a great exhaust noise. Oh and you can fit stuff in it too with its 36 cu ft of cargo space.

Last year the dash display was upgraded, the tachometer is now front and center. The SRT button allows drivers to pick and choose the various mode parameters such as throttle response, steering weight and suspension stiffness. Our car had full leather Sepia colored seats with a black dash and accents. The SRT seats are super supportive, all power adjustable for driver and passenger. Our test car had $10K worth of optional equipment including Rear Blu Ray, Harman Kardon audio system, Brembo brakes and a dual panoramic sunroof. We would keep the brakes and the Harman Kardon, which would make it almost a bargain. Fit and finish is very good and we didn’t hear any rattles or squeaks despite the fact that press cars have been driven pretty hard.

Should I Buy One?

Some of its European rivals offer greater performance, more luxury, or both, but none of them come close to matching Grand Cherokee’s price tag for the type of performance it offers……..and that exhaust sound is simply wonderful. Some of the rivals are almost double the price. Some prospective buyers may want to wait for the Cherokee SRT Hellcat Trackhawk).
I think the 2017 Jeep Grand Cherokee SRT in this form is just perfect.