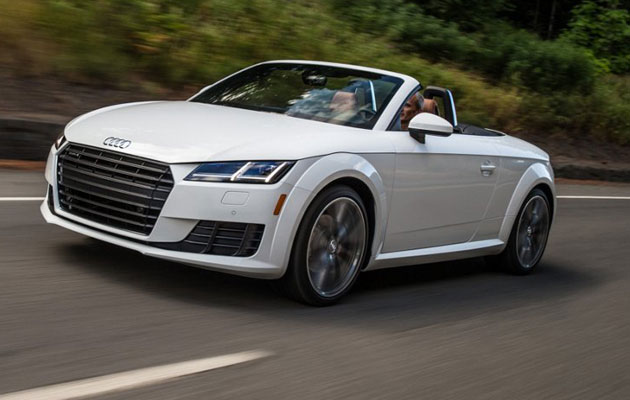 Fiat Chrysler had to send the Dodge Challenger Scat Pack we were expecting to SEMA so Audi stepped in and delivered us the 2016 Audi TT Roadster instead. Not a bad exchange considering how much we liked the 2016 Audi TT Coupe we had a couple of weeks ago.

Once again there’s no manual transmission but it really doesn’t need it because the dual clutch is sensational. So we have the same quattro all-wheel drive system with torque vectoring and electronic limited slip differential . For the first time, the quattro’s behavior has also been linked into the Audi drive select system, which adjusts torque distribution in depending on which mode is selected and steering angle. We can tell you it works!

So the main differences are this car has a soft folding roof and no back seats. Instead the roof , which takes 10 seconds to open, stores itself neatly where the rear seat used to be. This is no loss seeing as the seats on the coupe are not particularly practical. The suspension is a MacPherson strut set up in the front and a four-link setup at the back with a magnetic ride adaptive damping system available (but not on our tester, standard on TTS). The car sits on the now familiar MQB platform, same as the VW Golf and according to Audi the curb weight has been reduced by as much as 110 pounds, although this Roadster weighs a tad more. 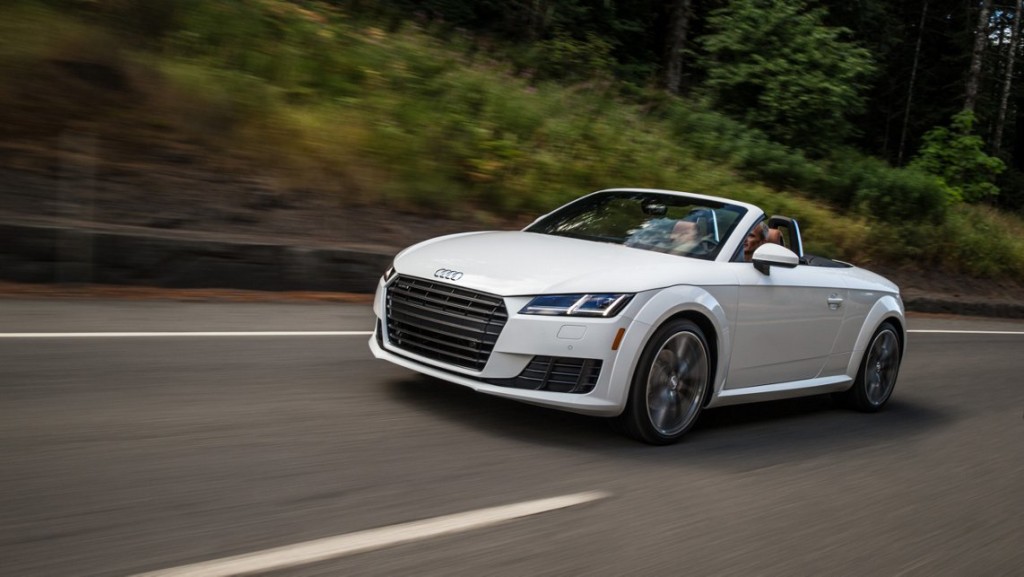 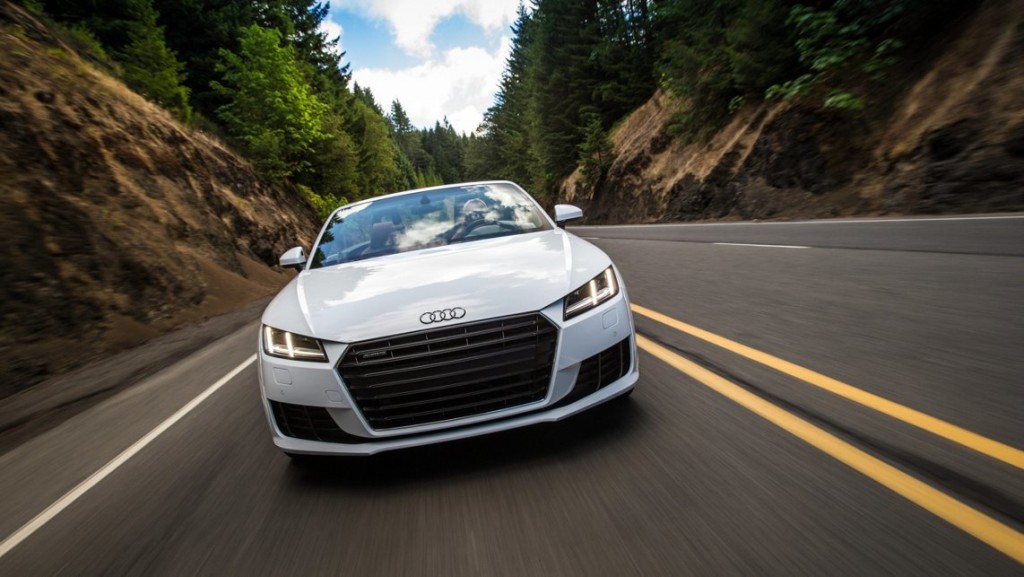 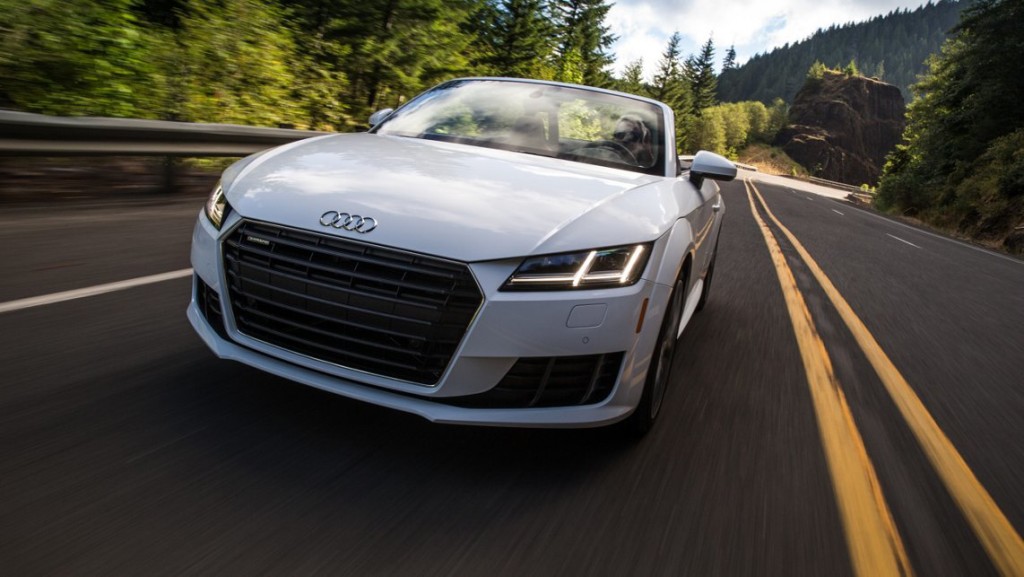 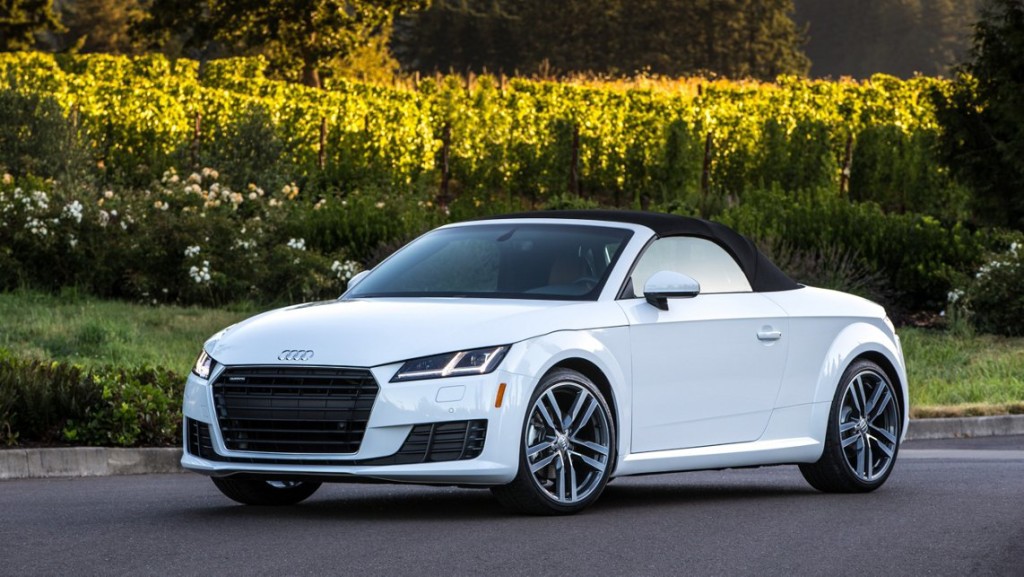 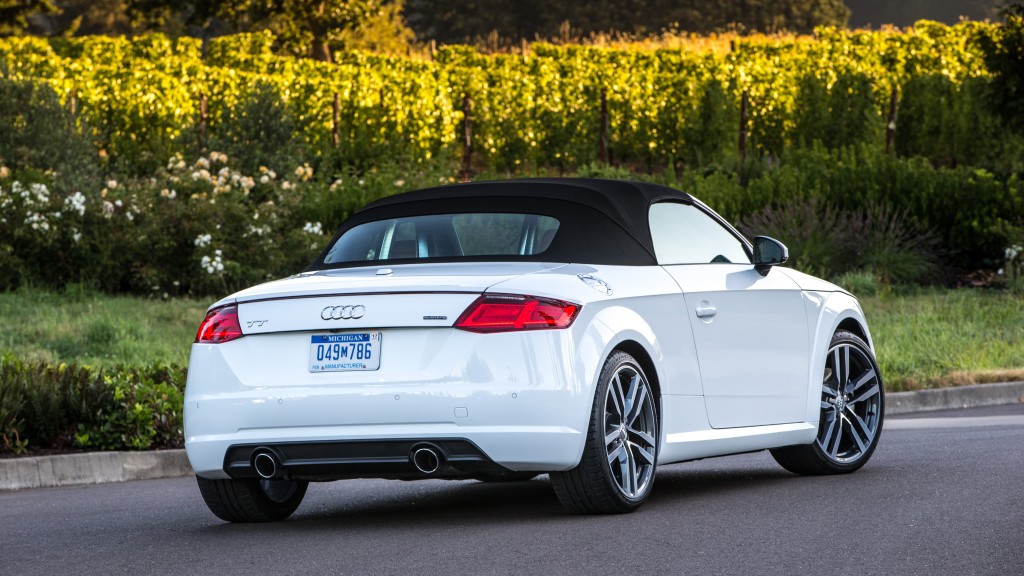 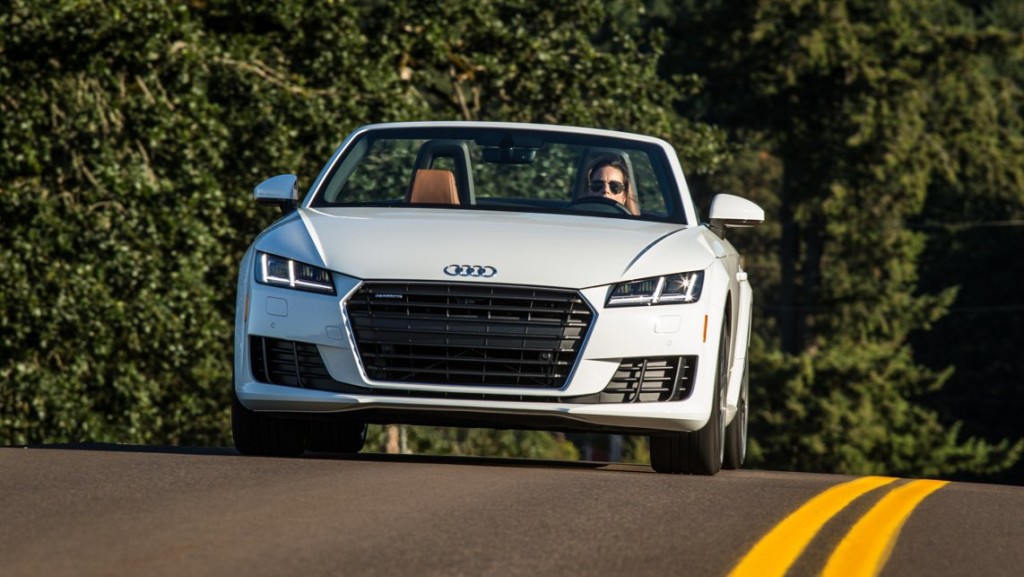 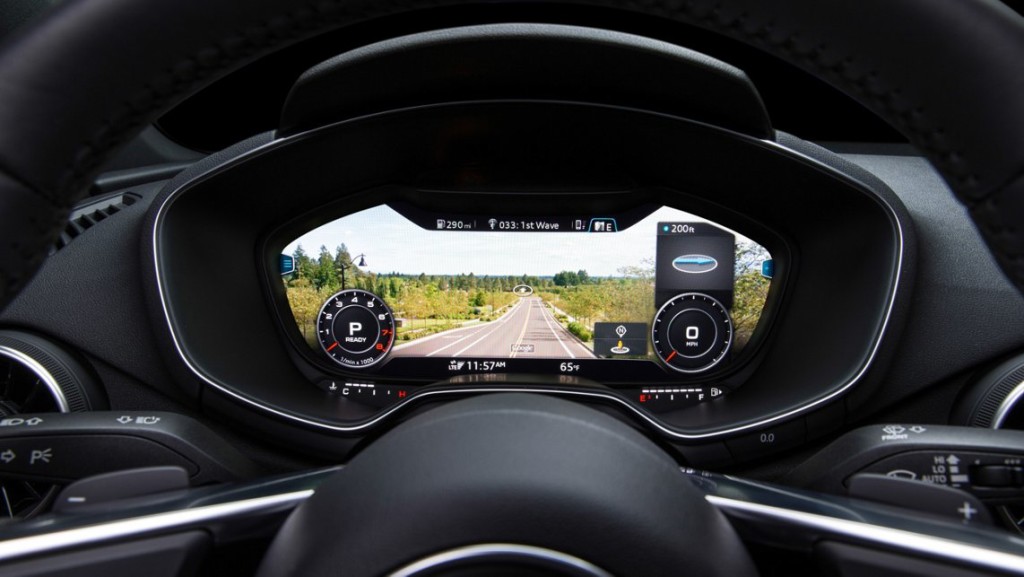 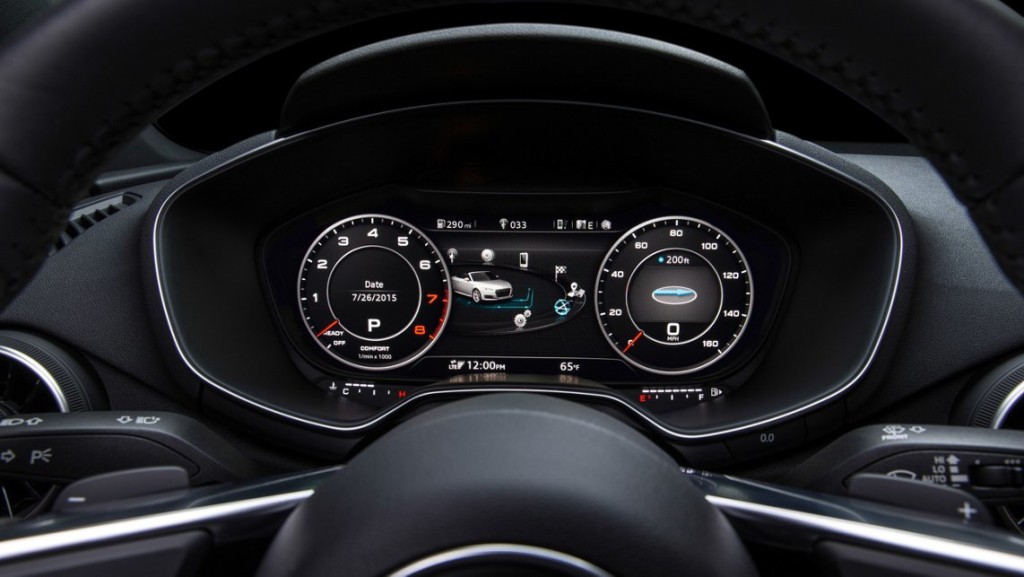 It’s a little slower than the Coupe on paper but in the real world it’s a fun car to hustle along a twisty road or cruise down the coast. We spent most of our time, during the week we had the car, in Dynamic mode because its the most fun. Audi’s dual-clutch gearbox is spectacularly good when left in full auto sport mode offering super quick upshifts and downshifts, although we did occasionally catch the system napping and there was slight delay before we got the gear we wanted. We also had the roof off.

Of course the first place we headed were the mountains to the east of San Diego, as this is where we expected the TT to shine……and it did.  Contrary to some rumors the engine puts out the same power as Golf GTI with Performance Pack, 220 hp and 258 lb ft. At full chat the motor sounds great and elicits a throaty snarl on upshifts and perfect rev matching on downshifts.  You can hear the high pitch of the turbo but that’s not a bad thing. From a standstill you do get that slight turbo lag before it takes off but this is not  a drag race car so it’s never an issue.

It’s on the twisty bits that this car really shines, it feels so planted and regardless of the turns the body stays very composed. We entered some corners at really high speeds to see if we could get some under-steer but to our surprise we felt the back end kicking out slightly and then straightening up again. Wonderful. Brakes are pretty strong with good pedal feel and only after several runs under hard braking did we experience longer pedal travel and a hot smell. For most these are very much up to the job. Steering is much improved and you can get some sense of road feel from the fronts. On regular streets you do notice the firm ride but it is easy to switch to comfort mode.

Once we had the Vbox attached we launched 4 times and got a best of 0-60 mph in 5.46 seconds, which is over half a second quicker than the outgoing model but a little slower than we managed in the Coupe. 30 – 70 mph was dispatched in a quick 4.98 seconds, plenty quick enough to pass slower vehicles on the back roads. We never felt like the car lacked power at all so when the TTS becomes available we will have to see if it is indeed worth the extra money.

Just How Quick Is The Audi S8?

Roof on or Off?

From a distance the TT Roadster may look similar to the TT Coupe, but on closer inspection and for the most part, it is the same. But there are some notable differences between the two models, including certain body configurations like the wall that separates the interior from the luggage compartment. Above this wall are the steel roll-over bars, a design characteristic unique to the TT Roadster.

Let’s not forget about that electrically actuated fabric top. It’s available in a choice of three colors — Titanium Gray, Jive, and Black — and weighs only 39 kg (86 pounds), 3kg (6.6 pounds) lighter than its predecessor. The fabric top can then be stowed in a small yet spacious aluminum tray and can be opened and closed in just 10 seconds.

This has to be my favorite Audi interior yet. The most noticeable thing is the lack of center infotainment screen because everything has been relocated to the space in front of the driver’s eyes. It’s what Audi calls their virtual cockpit. It was developed in partnership with Nvidia, Japan Display Inc., and Bosch, and display sits directly in front of the driver where traditional analogue gauges would normally be. From there there you can configure maps, speedometer, tachometer and a whole host of things at the touch of a button. The only downside is that the passenger doesn’t have anything to look at except for the beautifully designed dash, shaped like an airplane wing if look from above, and the amazing jet engine vents with A/C and seat heater controls in the center of each one. Fantastic.

The front seats (ours were the optional sport seats with Nappa leather) are very supportive and it’s easy to find a comfortable position for all sizes of driver. That’s not the case for the token back seats which are reserved for children or adults without heads. You wouldn’t want anyone back there anyway, this is a car to be enjoyed on your own.

Our test car came with optional 19 inch 5 star design wheels shod with 245/35 summer tires and a Bang & Olufsen sound system together with the Tech package I mentioned earlier to take the price to $50,025.

The 2016 Audi TT Roadster is just as much fun as the Coupe and is fun to drive hard but docile when you need it to be. The interior is superb as is the quality of the materials. I am not a huge fan of soft tops but if I had to have one then this is a very good option.

Bugatti Chiron is a GO