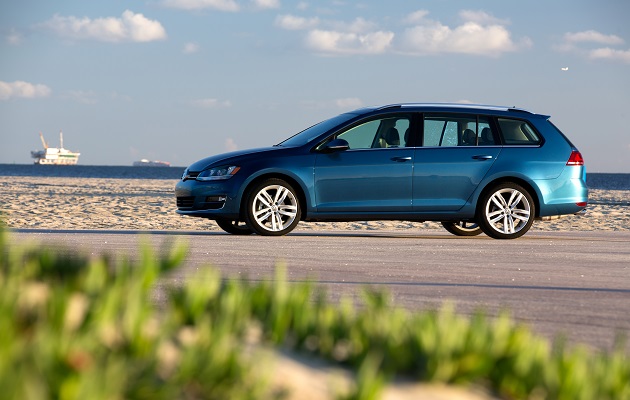 The day our Silk Blue metallic 2015 Golf Sportwagen TDI arrived we were strangely excited, knowing that the hatch version had just broken the mpg record from another VW, the Passatt TDI and positively mullered the record set by any Hybrid, with a hard to believe 81.17 miles per gallon. The caveat here is you won’t get anywhere near this number in your everyday driving but you could get a possible 43 mpg, without having to embarrass yourself  by driving a Prius. Enough about that, let’s talk about the TDI Sportwagen, which is brilliant.

Based on the award-winning Mark 7 Golf, the all-new Golf SportWagen replaces the outgoing Jetta SportWagen TDI Clean Diesel and is joined by a 1.8T TSI Golf SportWagen model with the gas engine. It uses the Modular Transverse Matrix (MQB) architecture introduced with the latest Golf, and we think it looks pretty stylish. What we won’t get here but wish for, is a GTI wagon….not happening……. or the 296-hp, all-wheel-drive Golf R wagon just launched across the pond…..not happening either.

Once the car arrived at our offices I jumped in, put my foot on the brake and hit the now familiar start button. Lights came on but the car wouldn’t start, uh oh, they delivered a dud, until I looked down and realized it had a manual transmission, do’h. Ok start again, put foot on brake, depress clutch, push start, engine fires and we’re off. How happy was I that they had delivered a manual, VERY. 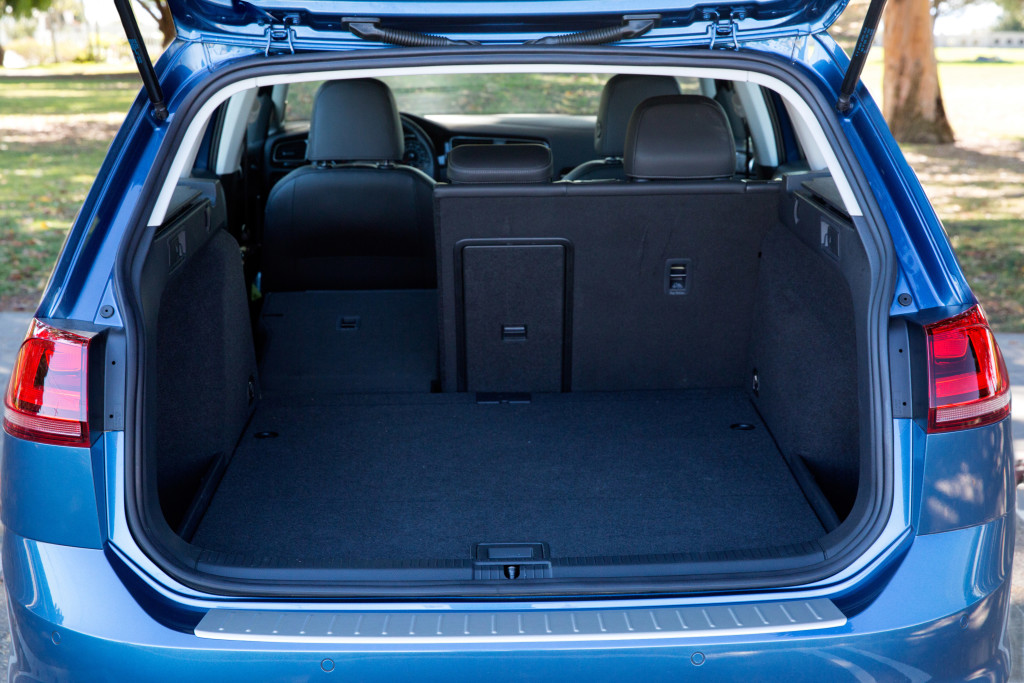 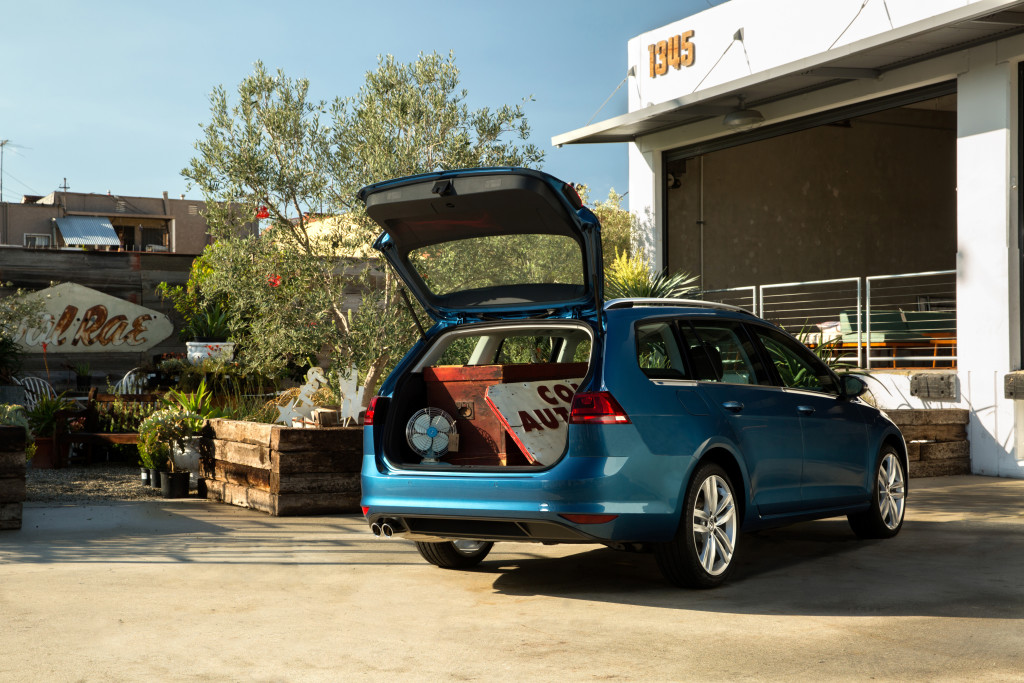 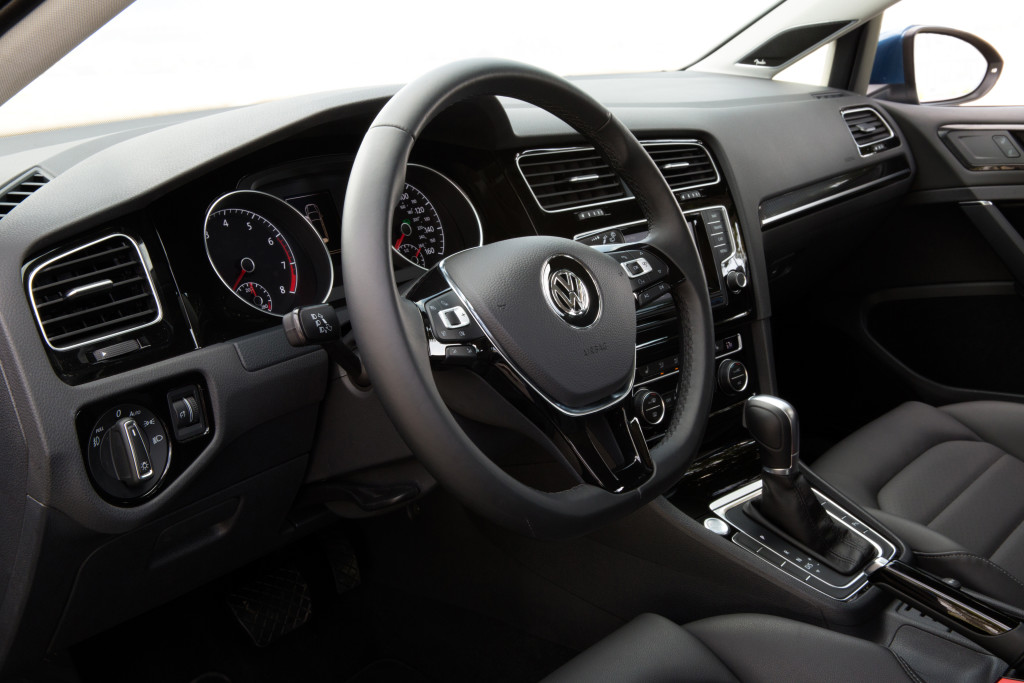 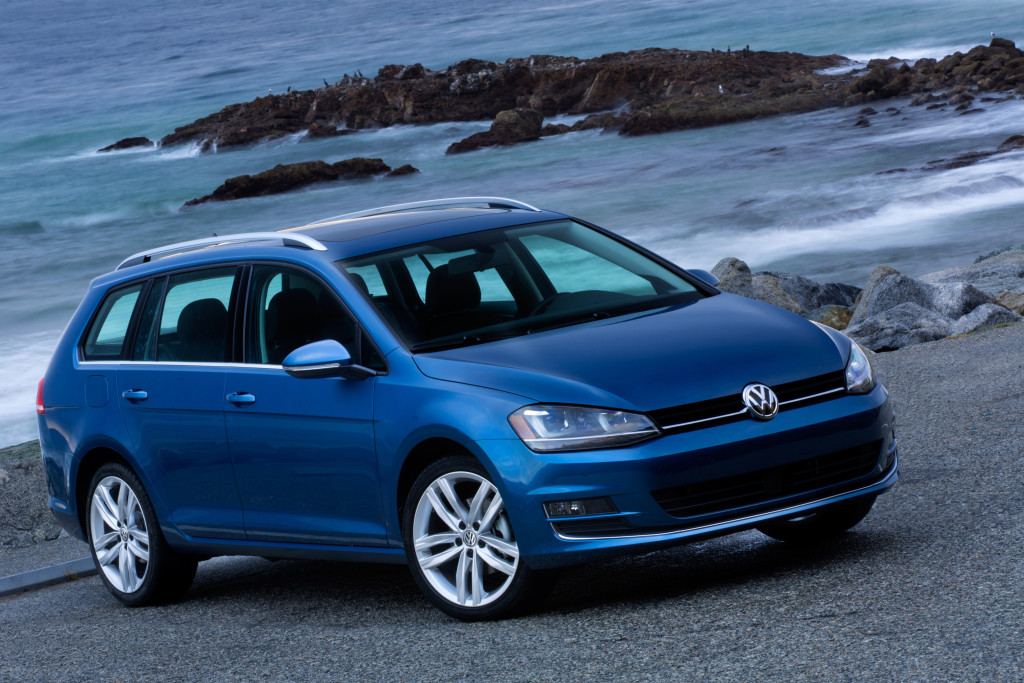 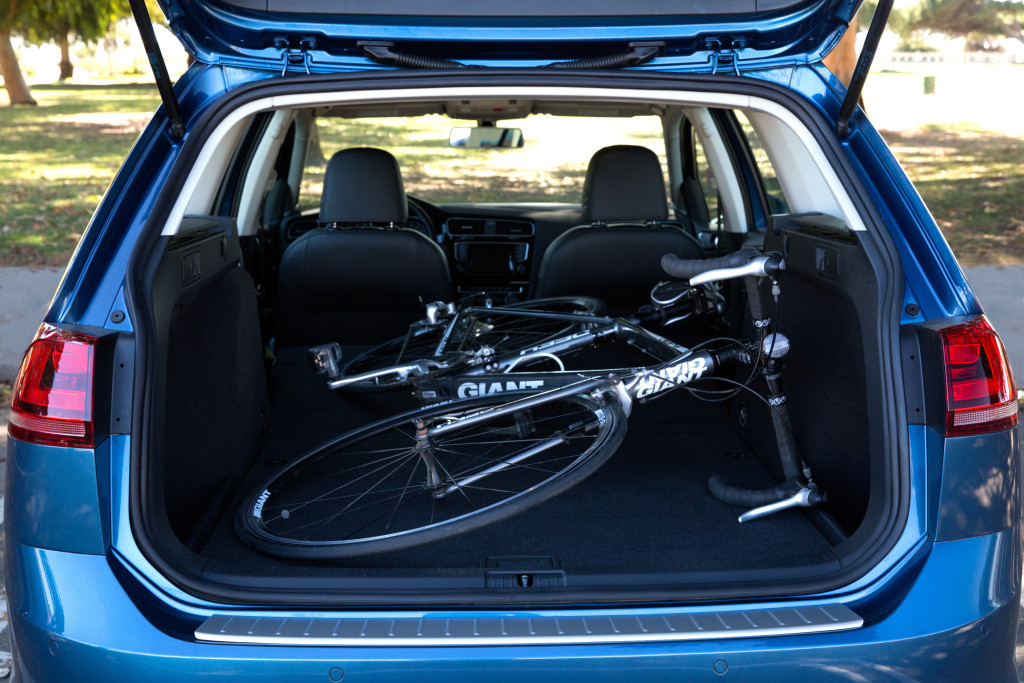 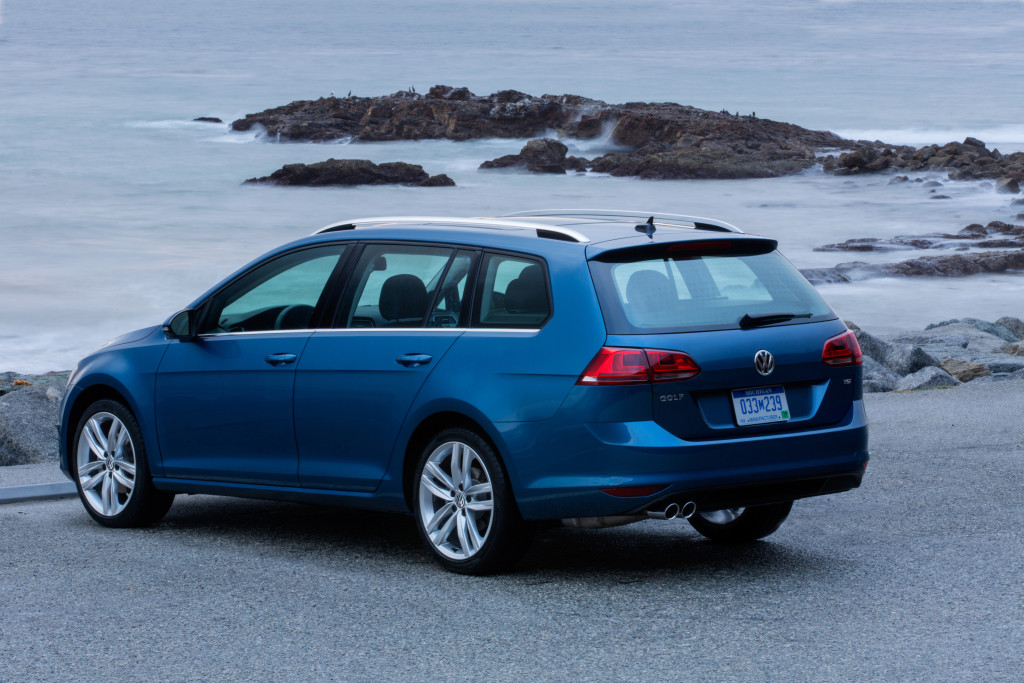 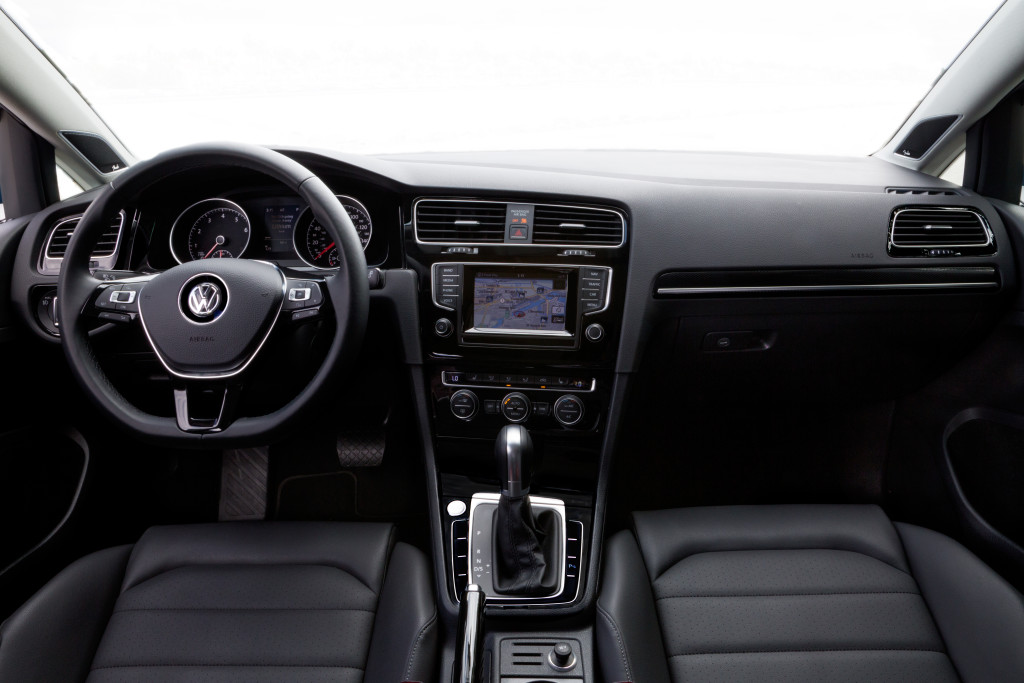 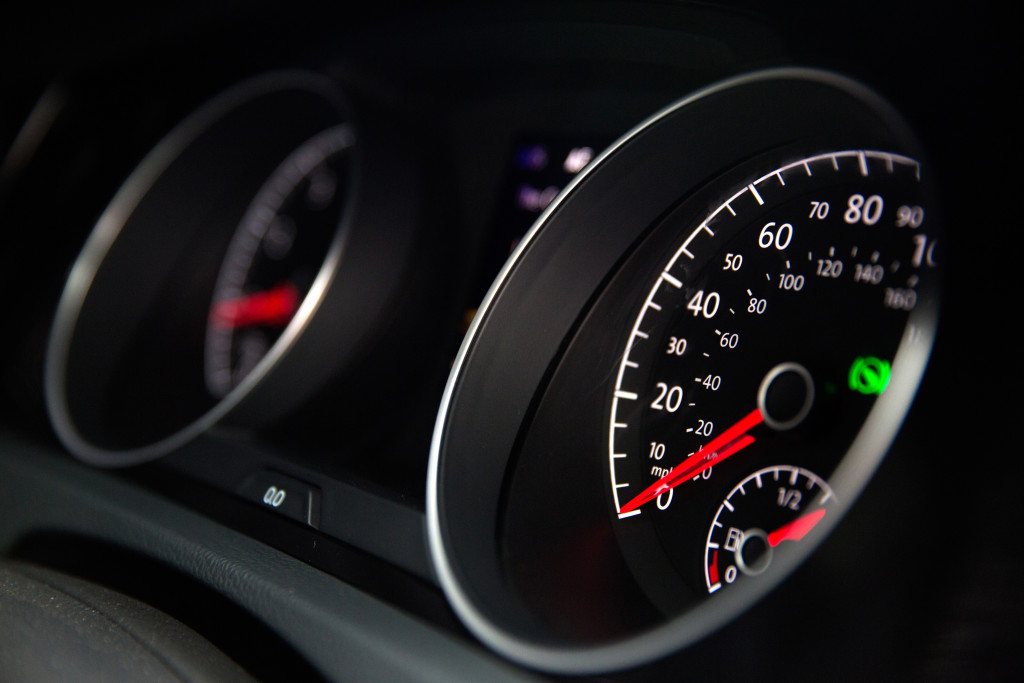 The Golf SportWagen will be offered with two powertrains, a 1.8-liter, 170-horsepower turbocharged and direct-injection four-cylinder TSI engine mated to a five-speed manual or a six-speed automatic transmission and a 2.0-liter, 150-hp turbocharged (up 10 hp from the previous model) and direct-injection four-cylinder TDI Clean Diesel, fitted with a six-speed manual or a six-speed DSG dual-clutch automatic transmission. Don’t expect the TDI to win many drag races, but that’s not the point. It’s not slow but it likes to stay below 4,000 rpm to keep within the engine’s sweet spot. The important number to remember is 236 lb-ft @ 1750 rpm. We managed the dash to 60 mph in 8.6 secs.

The 1.8T model with manual transmission has an EPA estimated highway fuel consumption of 36 mpg, while the TDI Clean Diesel model with the stick shift gets an impressive 43 highway mpg according to EPA estimates. We drove it pretty hard for the week we had it and couldn’t get any worse than 36 mpg. We imagine on a long run you could better the EPA estimates.

As we said before it’s the torque that counts here and this is where the car shines. It is so easy to drive. 3rd gear is good for around town and when you do need to change gear the shift action is precise and fluid. This car is based on the very good Mark 7 Golf so its chassis control is excellent. It manages body roll well and the ride is always smooth and compliant. Strangely the TDI gets a solid rear axle instead of the multi link system in the TSI, but most won’t notice. Steering and brakes are spot on.  At speed, all of those torques make for solid acceleration. At low speed, however, we encountered some turbo lag a sit spooled up.

At 179.6 inches long and 70.8 inches wide, the Golf SportWagen is 1.1 inches and 0.7 inches larger than the Jetta SportWagen, although overall vehicle height has been reduced by 1.1 inches.

The SportWagen TSI S model is equipped with 15-inch aluminum-alloy wheels, while the base TDI S gets treated to 16-inch wheels. The SE trimline has 17-inch wheels for both TSI and TDI models, while the topline SEL trims have 18-inch alloys. A panoramic sunroof is standard equipment on all trim models except the S and the SEL has silver roof rails to set it apart from its S and SE brethren. Having an aversion to sunroofs we were glad ours didn’t have one

We asked a couple of folks at the office how much they thought the sticker was on the Golf and guesses were usually North of $35K. When I told them this car is $25k they were floored simply because the car has a high quality, upscale interior.Even the seats, which are pretty good are wrapped in a soft leather like fabric which isn’t too far away from real cow and much cheaper. I constantly found myself touching the door pockets which are trimmed with soft furry fabric. Don’t ask.

The SportWagen has an huge trunk that’s in comparison to most compact SUVs. With the rear seats up, the SportWagen boasts 30.4 cu ft of space: when the 60:40 split rear seat is fully folded, that figure rises to an enormous 66.5 cu ft of storage. That’s close to what a Subaru Outback offers.

All plastics seems to be of a premium quality and you actually get a proper hand brake. Even for being the base S model our car wasn’t lacking for anything and unless you need Climatronic automatic air conditioning, and sport seats with 12-way power adjustment for the driver as well as Lighting and Driver Assistance options packages, I suggest you save you hard earned cash.

The base TDI S starts at $24,595 and offers a six-speed manual gearbox and 16-inch aluminum-alloy wheels as standard, with a dual-clutch DSG automatic available for an extra $1,100. KESSY keyless access with push-button start and a rearview camera are among the standard features.

Starting at $27,995, the TDI SE has the same list of equipment and optional packages as its gasoline-powered counterpart, the 1.8T SE, including the Fender Premium Audio System, automatic headlamps and a panoramic sunroof. The Lighting and Driver Assistance package are available. The DSG transmission is an $1,100 option.

Starting at $30,345, the TDI SEL’s standard equipment mirrors the 1.8T SEL, adding features such as a navigation system, Climatronic automatic air conditioning, and sport seats with 12-way power adjustment for the driver. Both Lighting and Driver Assistance options packages are available on this trim. The six-speed manual transmission is standard, with the option of the DSG automatic ($1,100 extra).

To be honest if you are looking for a turbo-diesel, stick shift wagon, then this one is your only choice. If you want a quality ride with tons of space and phenomenal economy, for the money, it is simply impossible to get a more useful car. If we had our say though we’d have a GTi version with the trick front diff……….pretty please VW.

Cars With The Best Power-To-Weight