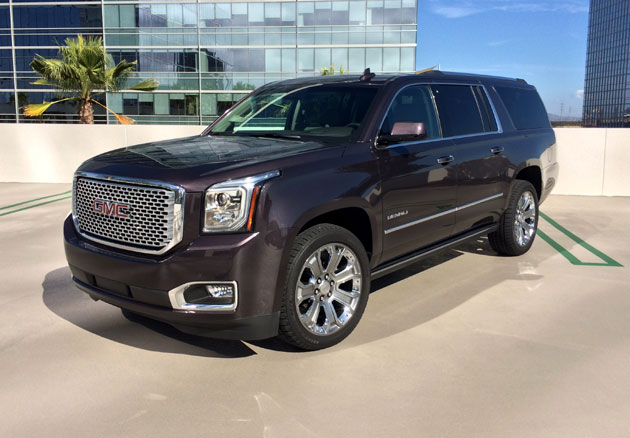 We were a little surprised when GM delivered a 2015 GMC Yukon XL Denali because we were expecting the non XL version and straight away there was a problem, it’s massive and it was purple….not Barney purple but what GM calls Midnight Amethyst. That’s a pretty bold color for a car this big but after pondering for a few minutes I decided I liked it. In certain light it’s gray, in others a shade of brown and if the sun catches it perfectly the purple shines through.

Enough of this nonsense and onto the serious stuff. This top of the range tester was loaded with many goodies and of course a 6.2-liter V8 powering all 4 wheels through an eight-speed automatic. This engine pumps out 420 hp @ 5,600 rpm, 460 lb-ft @ 4,100 rpm enough, as we found out to propel this 6,000 lb juggernaut from 0 to 60 in 6.6 seconds. That’s a lot quicker than expected, but not the whole story…… 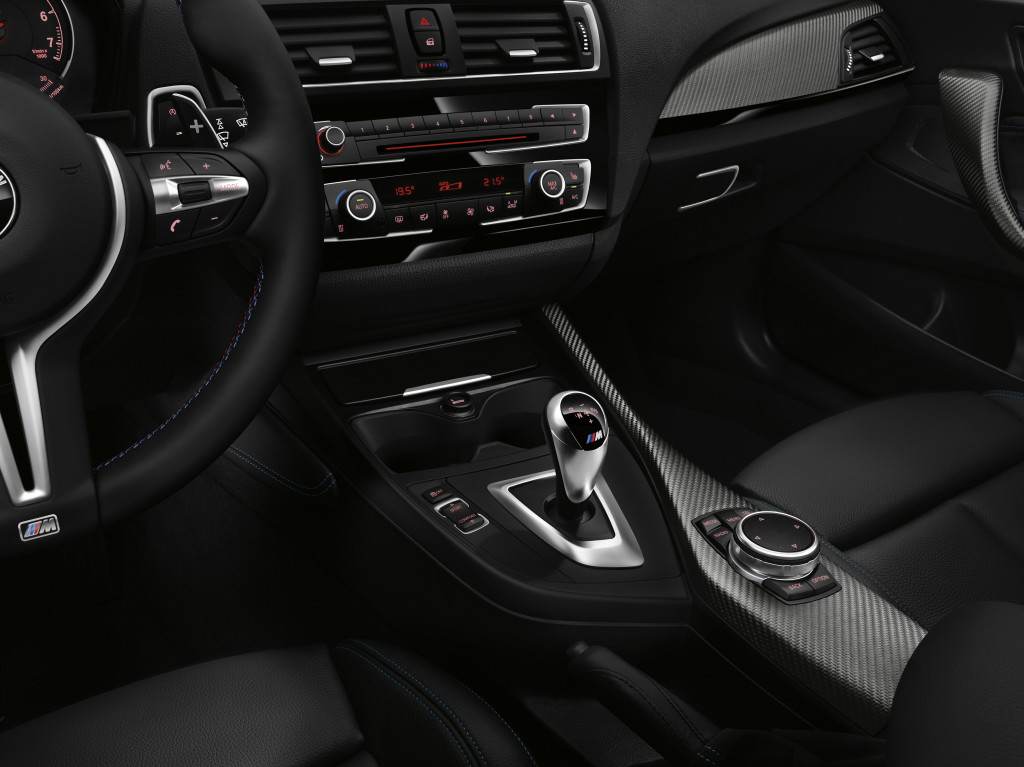 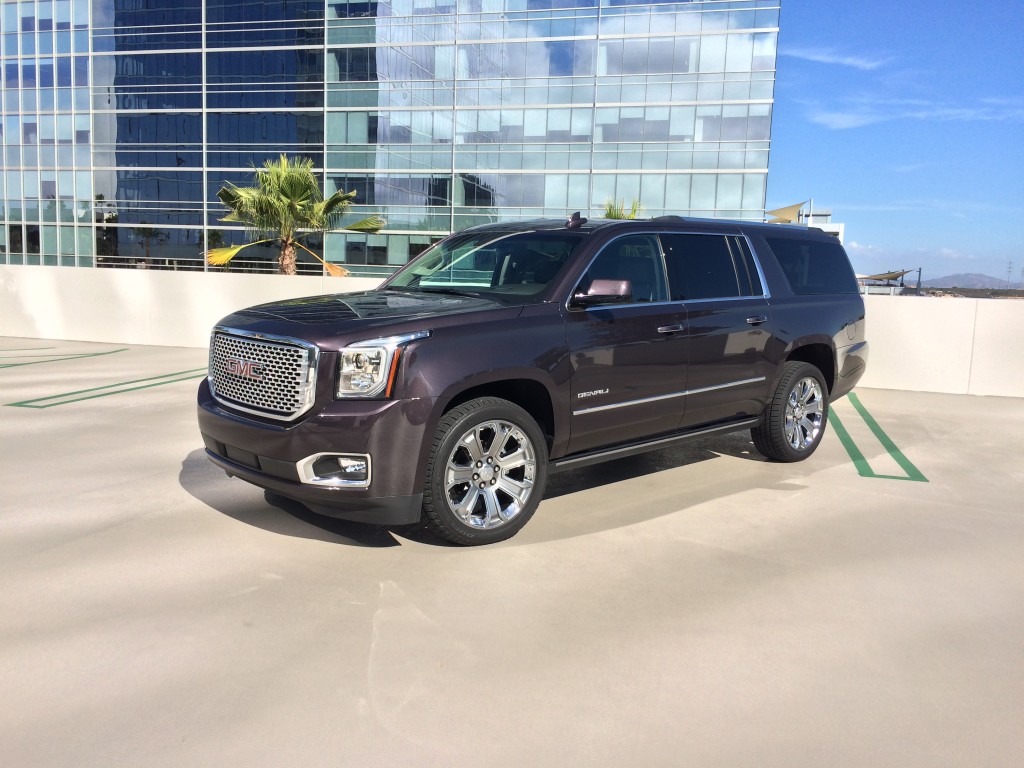 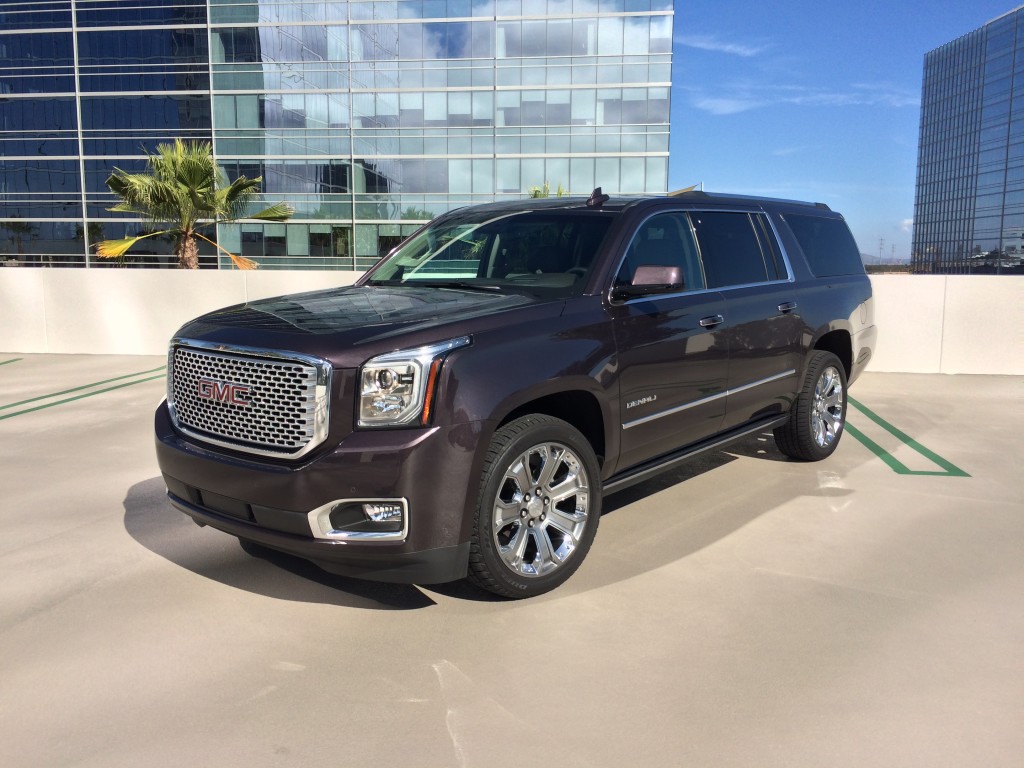 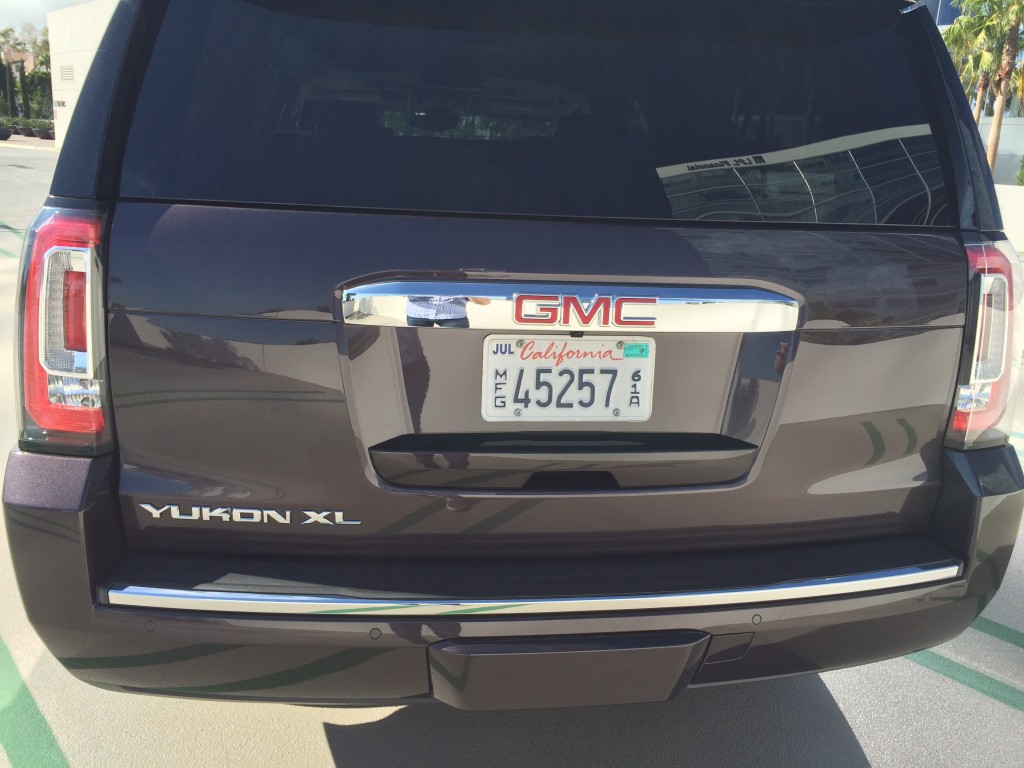 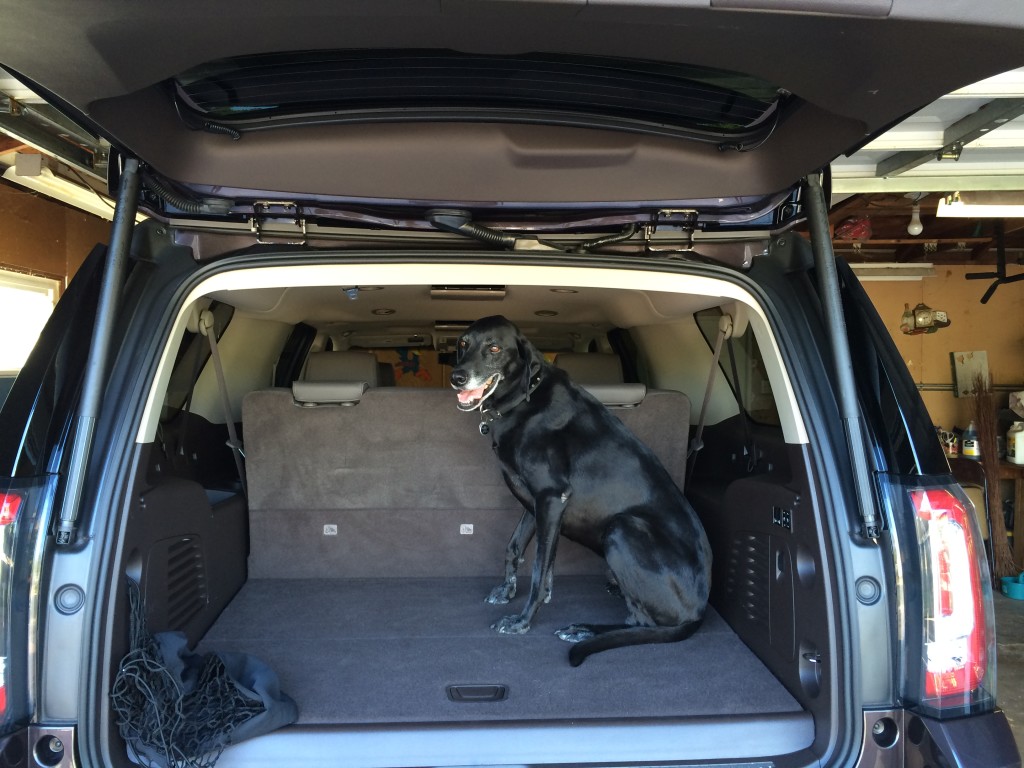 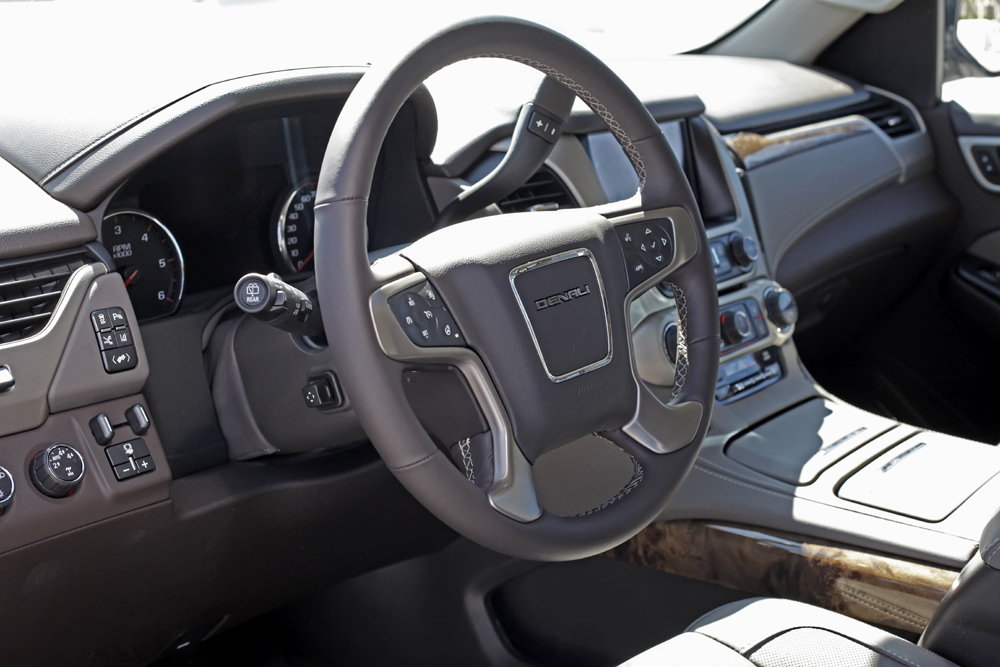 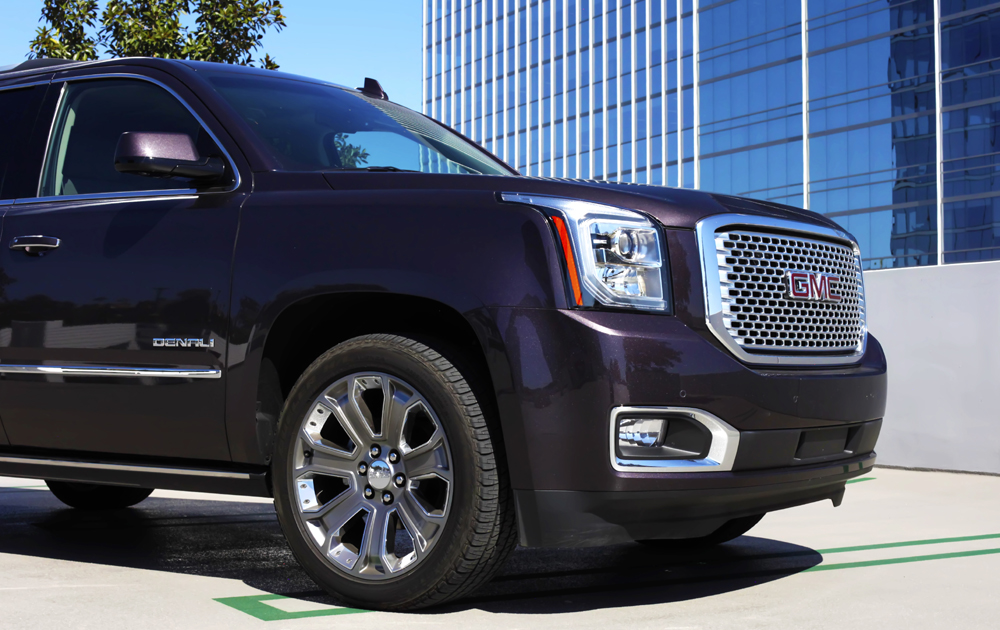 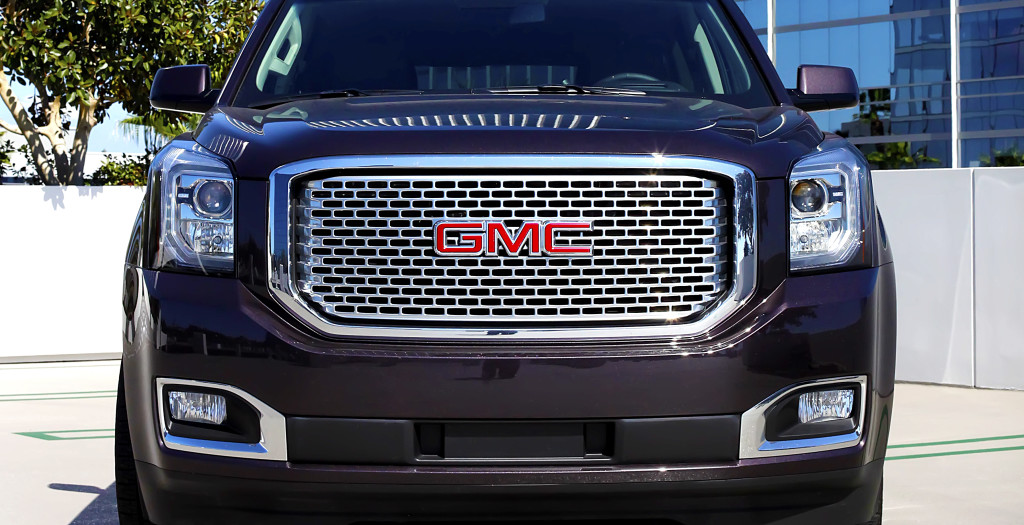 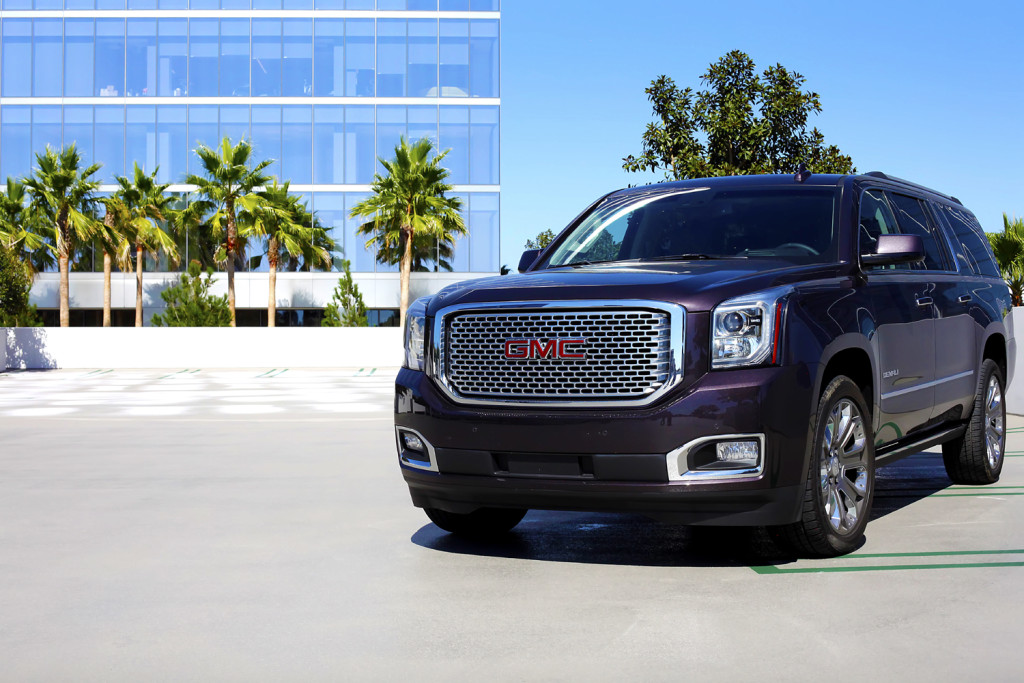 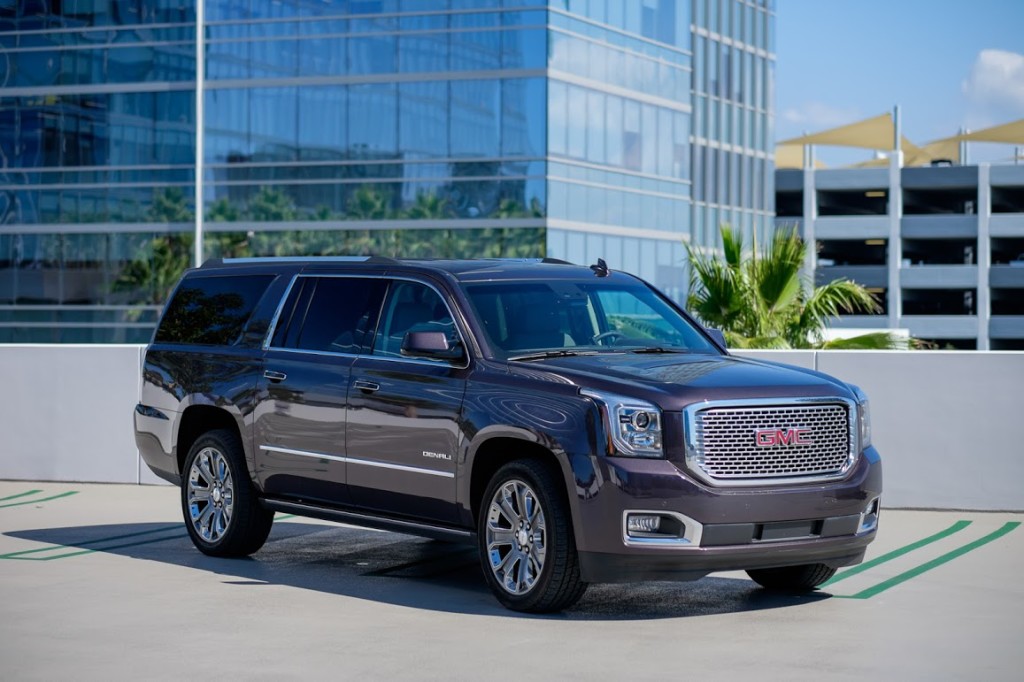 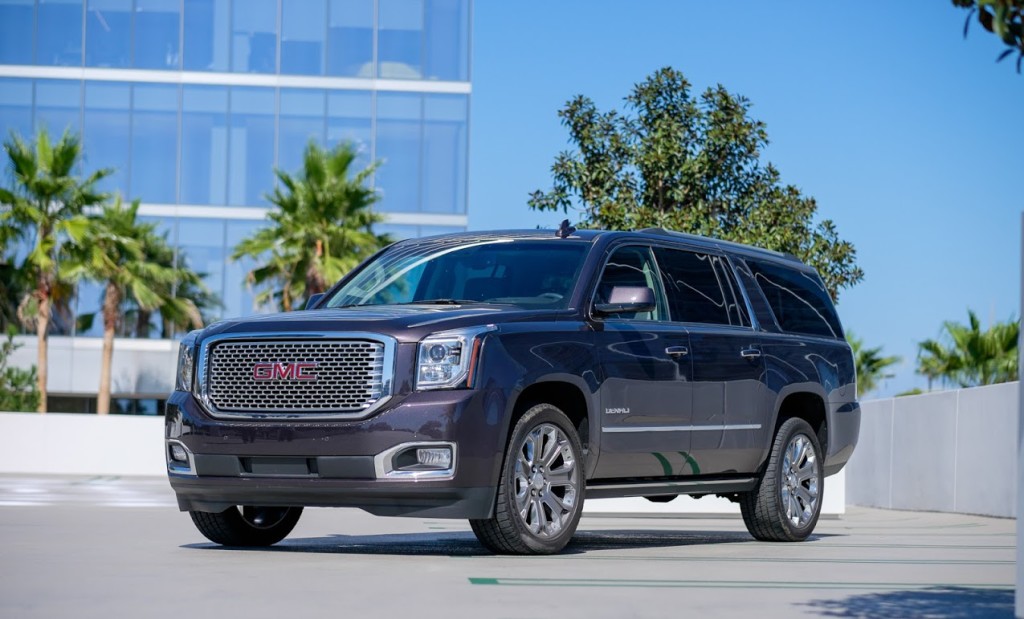 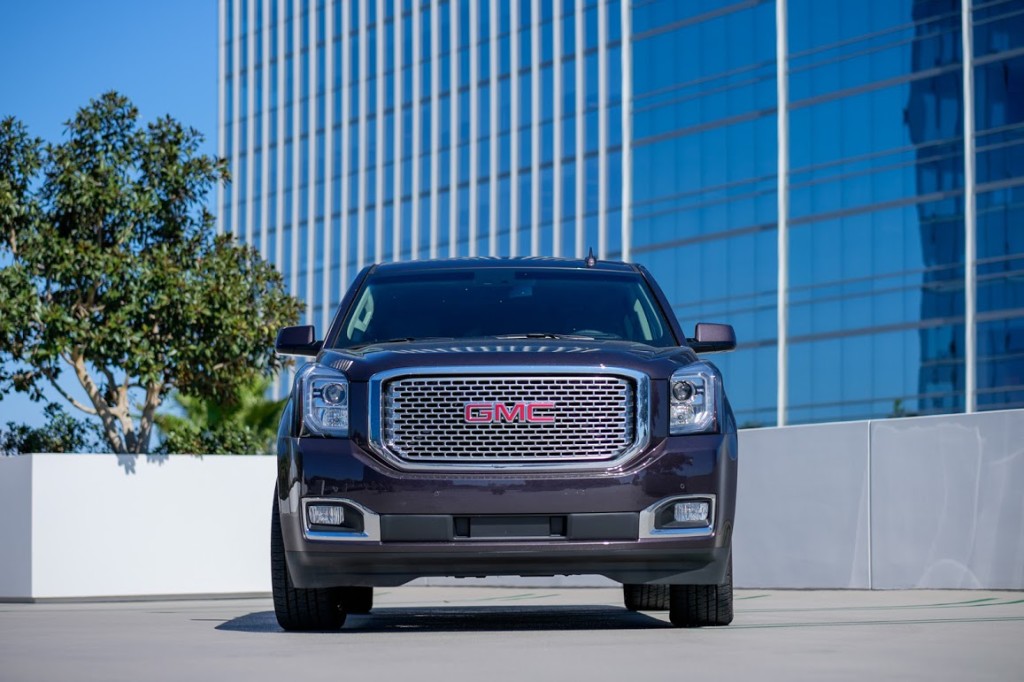 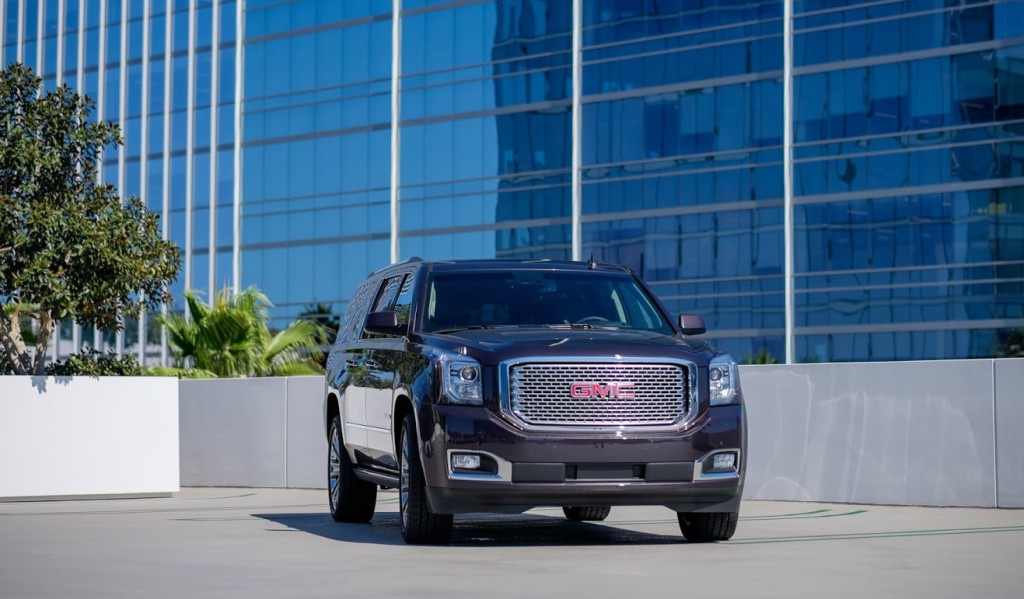 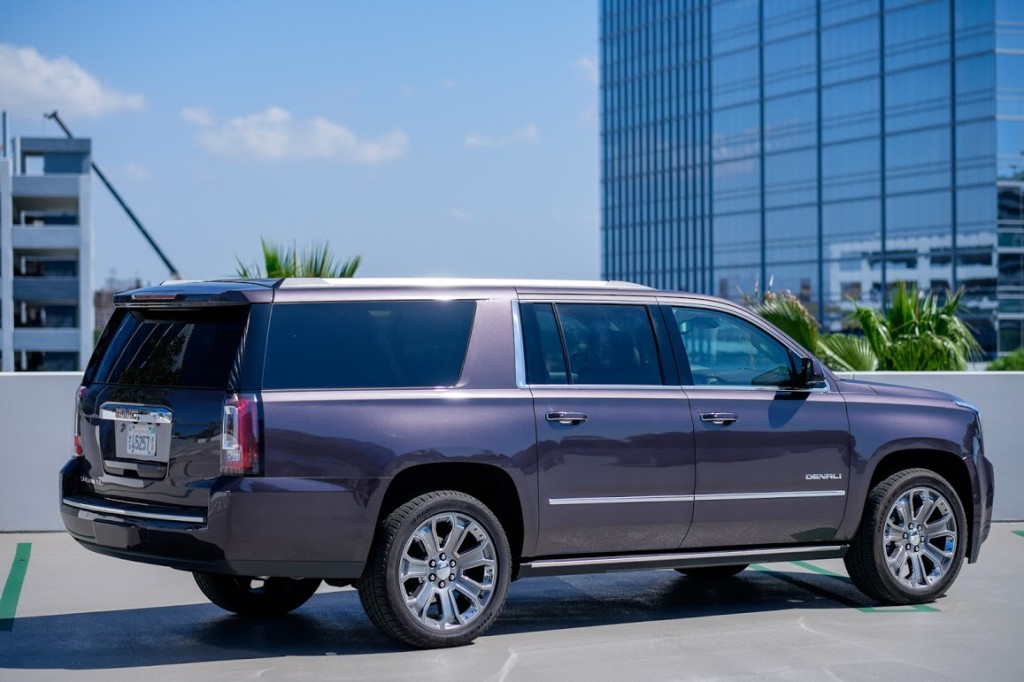 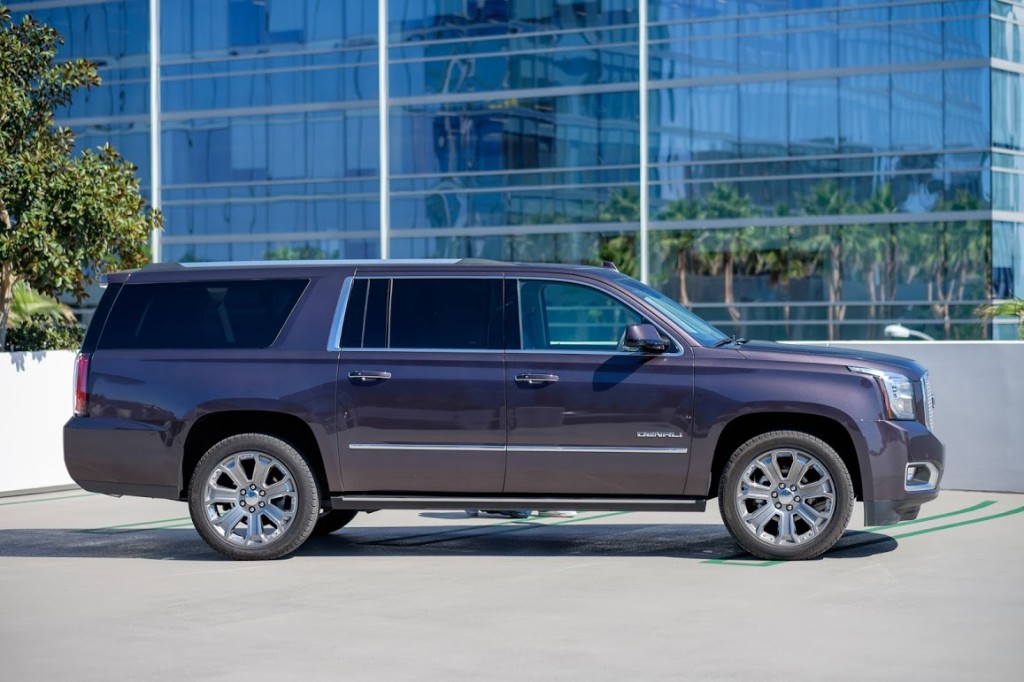 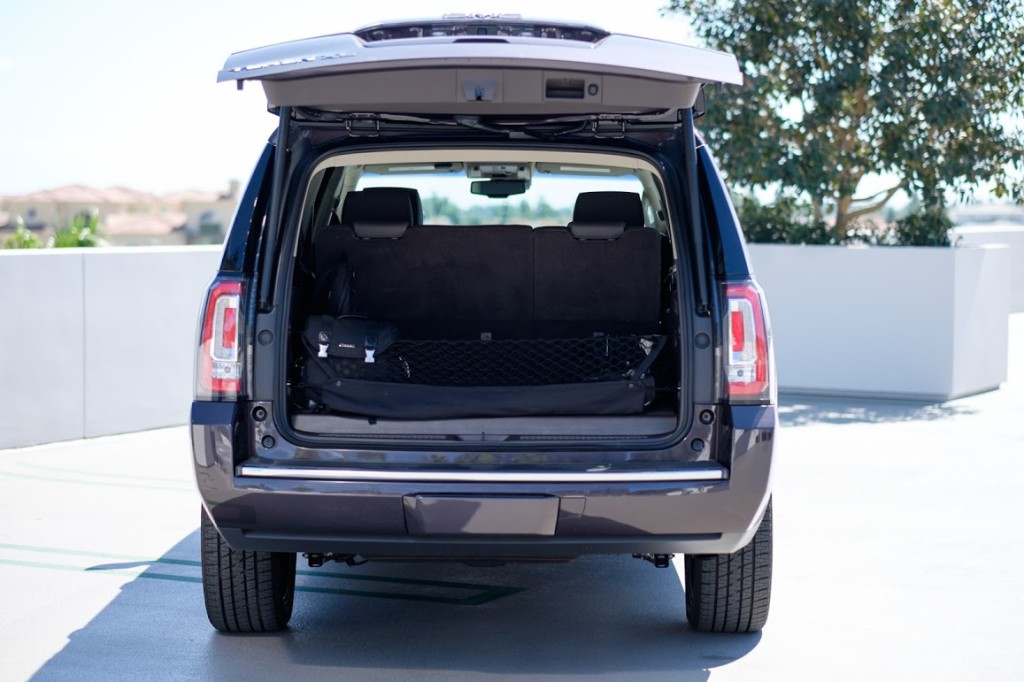 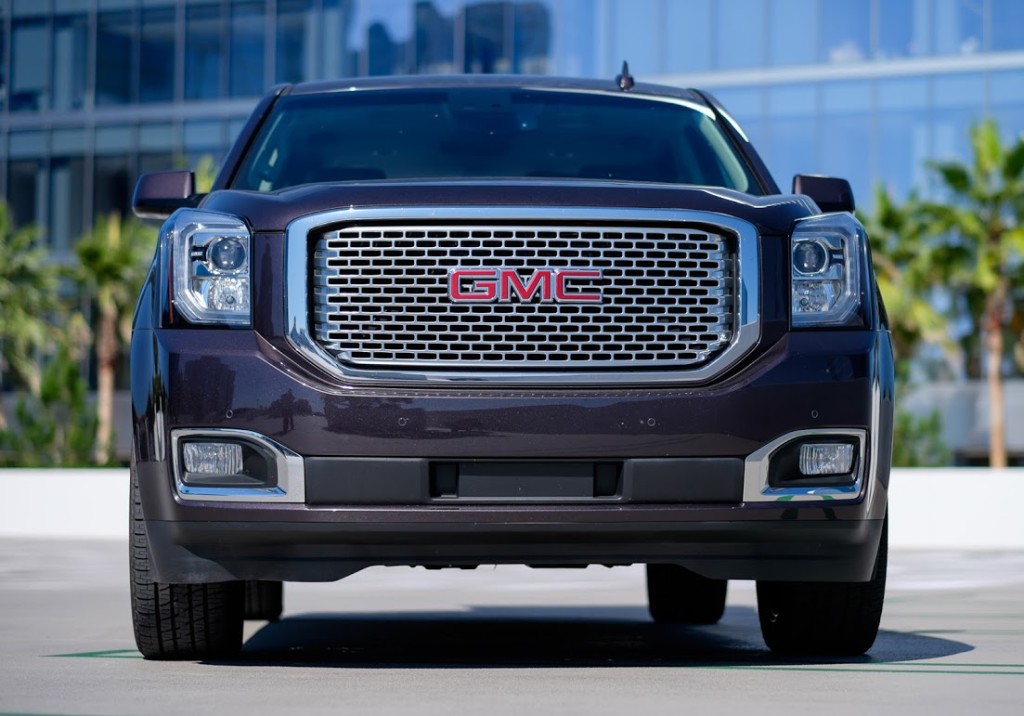 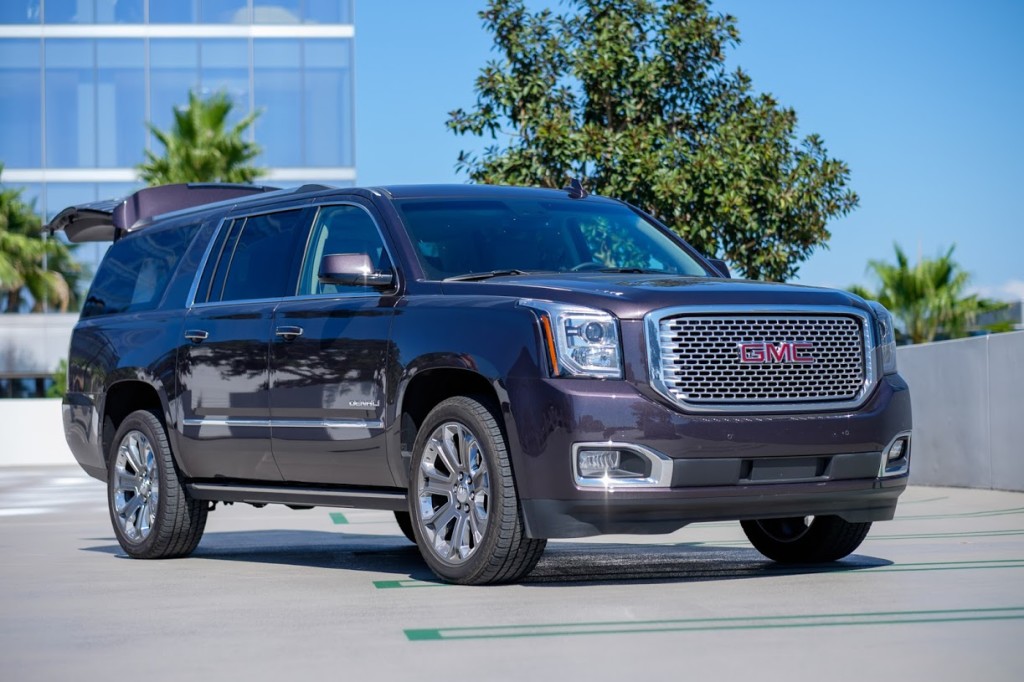 I have never been an SUV fan due to their driveability and sheer size, it ‘s like piloting an aircraft carrier, but after a short blast down the road, I soon came to realize what a joy it is. There’s no other way to put it. I couldn’t believe how easy it was to drive anywhere. Now that’s a pretty bold statement I know, and here’s a bolder one, it’s goes round corners really well. This is thanks to the magnetic ride suspension which keeps the body well controlled through corners and gives a surprisingly smooth and composed ride quality considering it’s truck like origins.

We found the steering to be really responsive and one of the best of any SUV we’ve driven. The brakes are good but require a decent push to stop the beast, but were fade free for the week we had it. The transmission downshifts quickly and mash your foot all the way down and this thing is pretty quick. At one point I had an Audi A4 driver behind me and I gave the throttle a jab and he had difficulty keeping up.

As we noted earlier, the 0-60 time is impressive for such a heavy vehicle but you pay the price at the pump, we averaged no better than 12 mpg for the time we had it. With a more delicate right foot you should expect 16 combined.

My wife, who has a horse, which seems to live forever, deemed it a good idea to see how many bags of shavings we could fit into the Denali. On arriving at Carters Feed Store I waved my foot to open the automatic tailgate and dropped the 2nd and 3rd row seats at the push of several buttons. With the power-folding third-row seats stowed away and the second-row seats folded, we instructed a couple of helpers to load in as many as they could until full. Verdict……..14 bags of shavings, which weigh 40 lbs each and are 3 feet by 2 ft by 2 ft….and there was still room for a driver and a passenger. Sometimes massive giant vehicles like this Yukon XL come in handy. Add to that a large family and I can’t think of anything else that would work that isn’t a minivan. 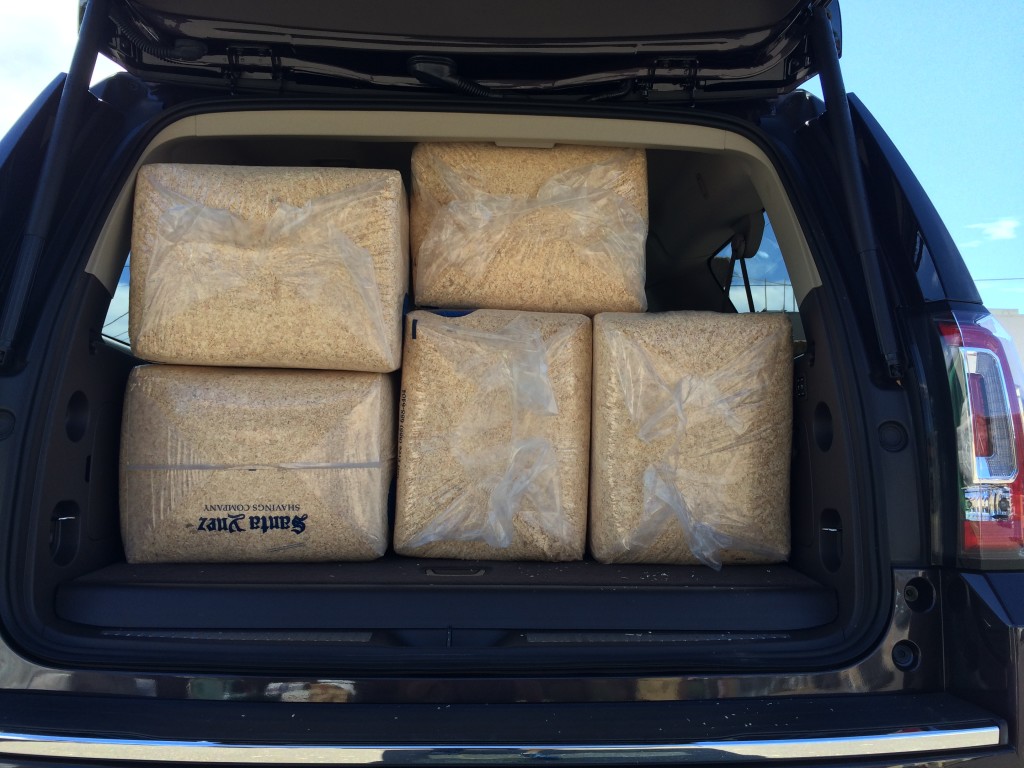 I can confirm that the front seats are outstanding, providing plenty of support and offer both heat and cold if desired. The second-row chairs are not quite as good and the 3rd row now sits higher robbing some overall cargo room. (maybe one more bag of shavings?). We stuffed 8 adults in our tester for a lunch time field trip and there were no complaints, but GM may want to add a PA system so the driver can hear the rear seat passengers. Of course if you have kids then not hearing may be a benefit.

The Denali is certainly not short of stuff and the new dash is a huge improvement with its added curves, making it feel like a quality item. All plastics are soft feel and it all seems well screwed together. Most most controls are at hand, although there are a lot of buttons, and I think I pressed all of them at some point. Standard kit includes 3 zone climate control, Blu-ray/DVD rear-seat entertainment system with dual screens, an Eight-inch-diagonal customizable driver display with three available user themes, and wireless phone charging on the center armrest which only works if your phone has inductive charging capabilities, which mine doesn’t. Additional new features include keyless ignition, adaptive cruise control, lane-departure warning and audible park assist for both front and rear.
Best thing about this car is the secret compartment behind the center screen in the dash. Push a button and the screen glides up revealing a good sized storage space for well, Mr. Bond’s Walther PPK perhaps. Just great!

Our tester’s base price was $70,220 and with options that rose to $78,725, which sounds a lot but you get a lot of car. I expected not to like it but I loved it. If it had been difficult to drive I would have cursed it, but it wasn’t. If it had been slow I would have been frustrated, but it wasn’t. If it hadn’t fit in my garage it would have had to stay in the driveway, but it fit. GM has done wonders with this vehicle and I commend them, you have turned a detractor into a fan…..well done.