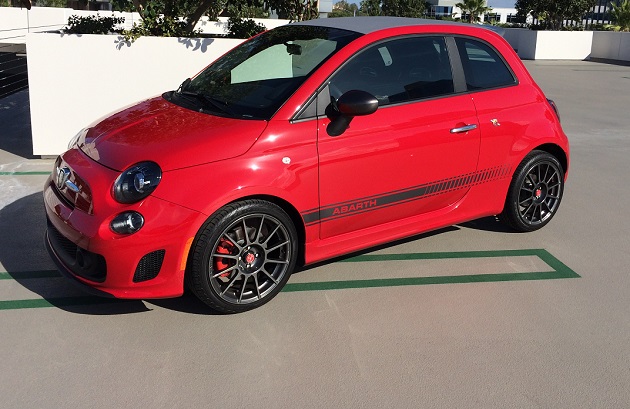 I lost count of the number of people that told me how cute this little car is and then in the same sentence asked me if it was safe. My typical answer to that question has always been, “cars are as safe as the human sitting behind the wheel”.
I won the office bet as to what color it would be when they dropped off the car and the 2015 Fiat 500C Abarth was indeed Rosso Red. The car soon became known as the the Red Hot Chili Pepper. As well as being easy to see this little car is oh so noisy, but in a good way. More on that later………. 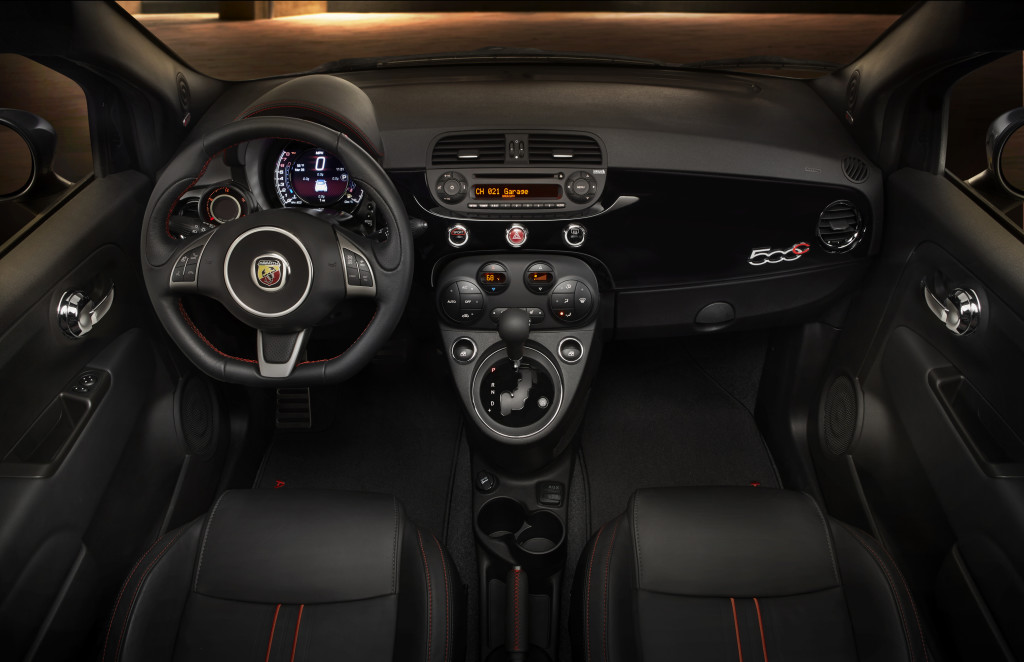 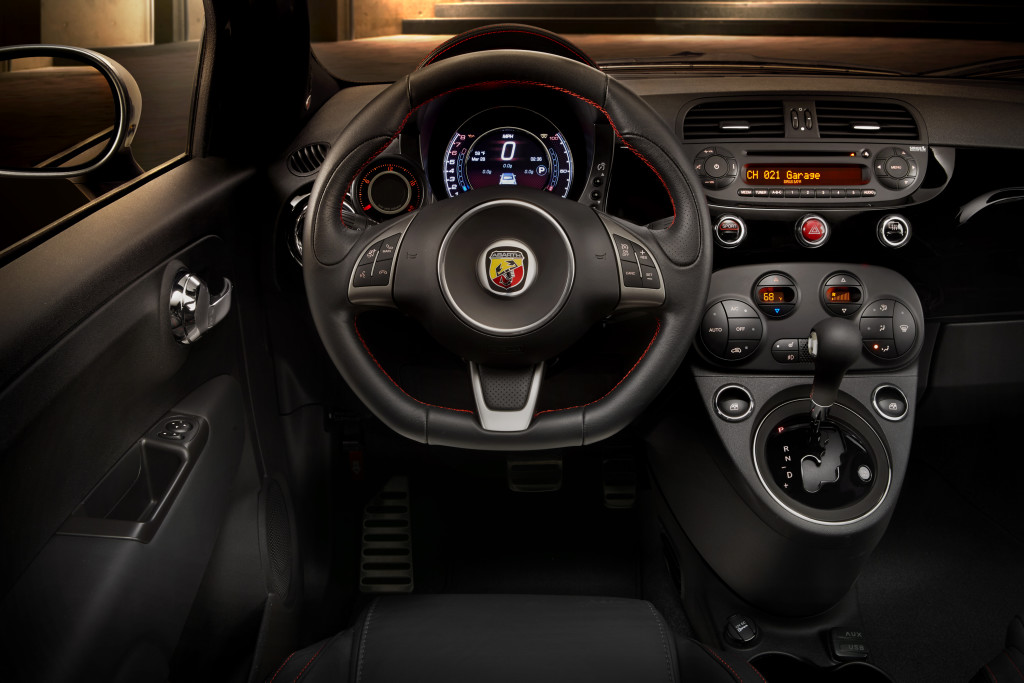 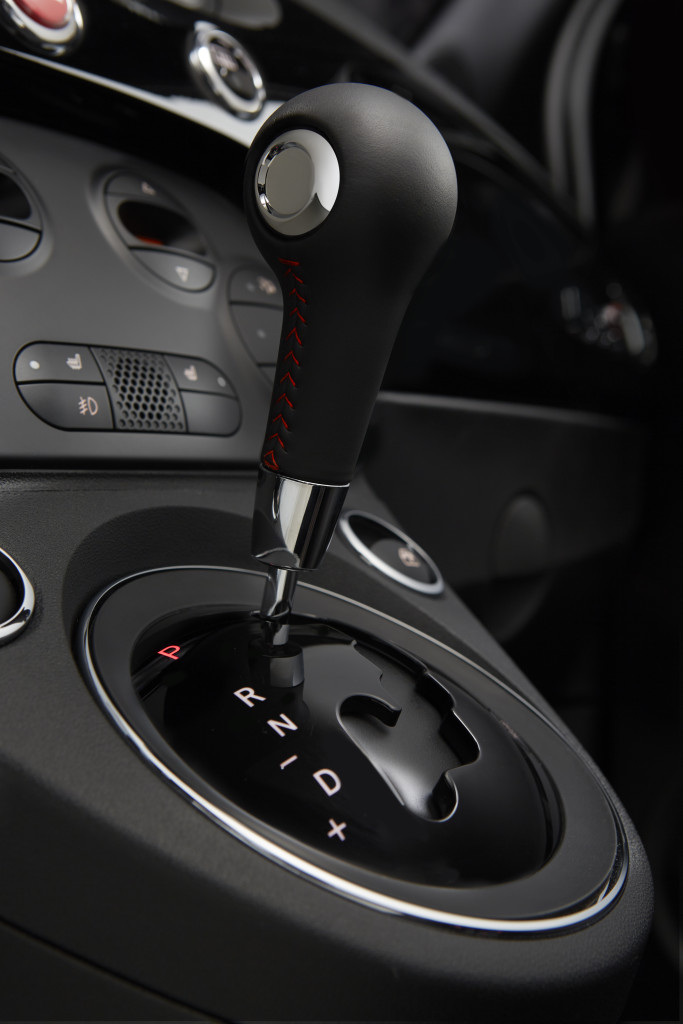 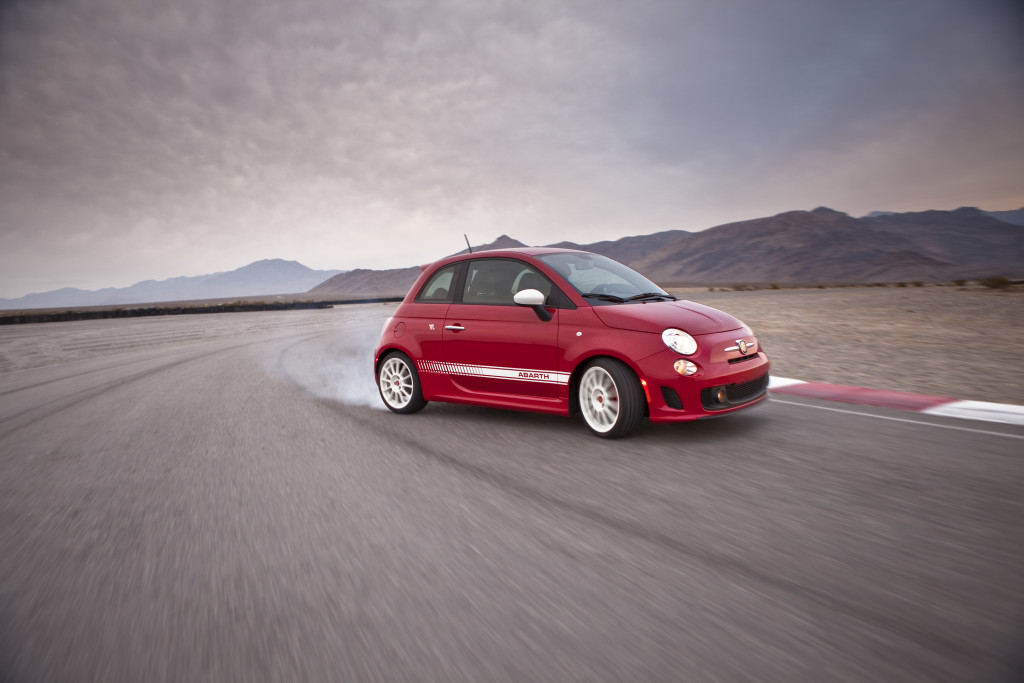 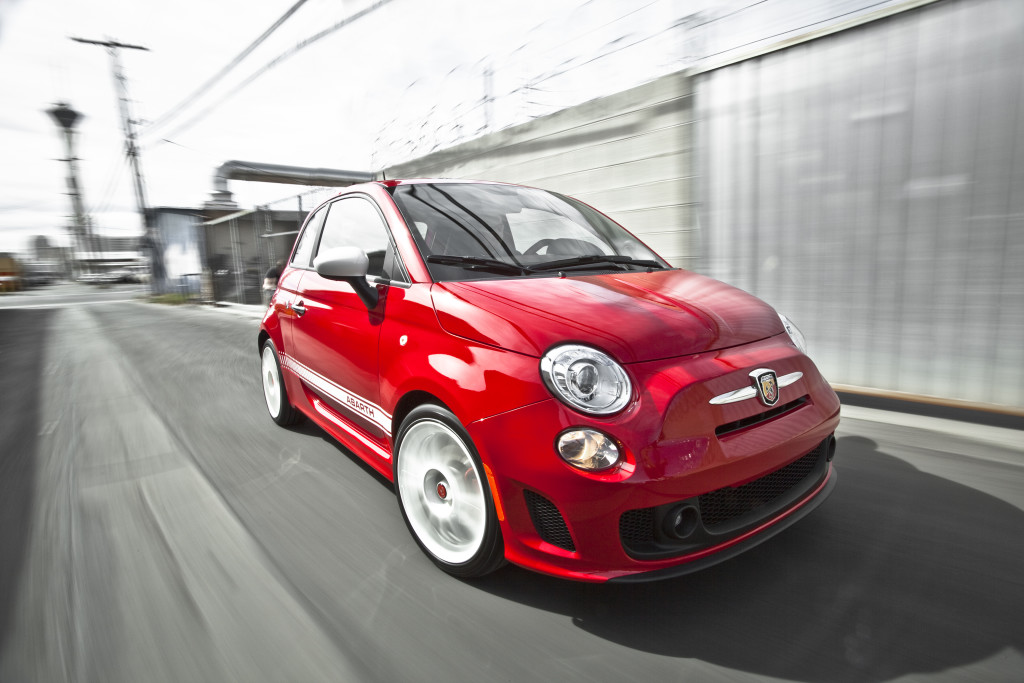 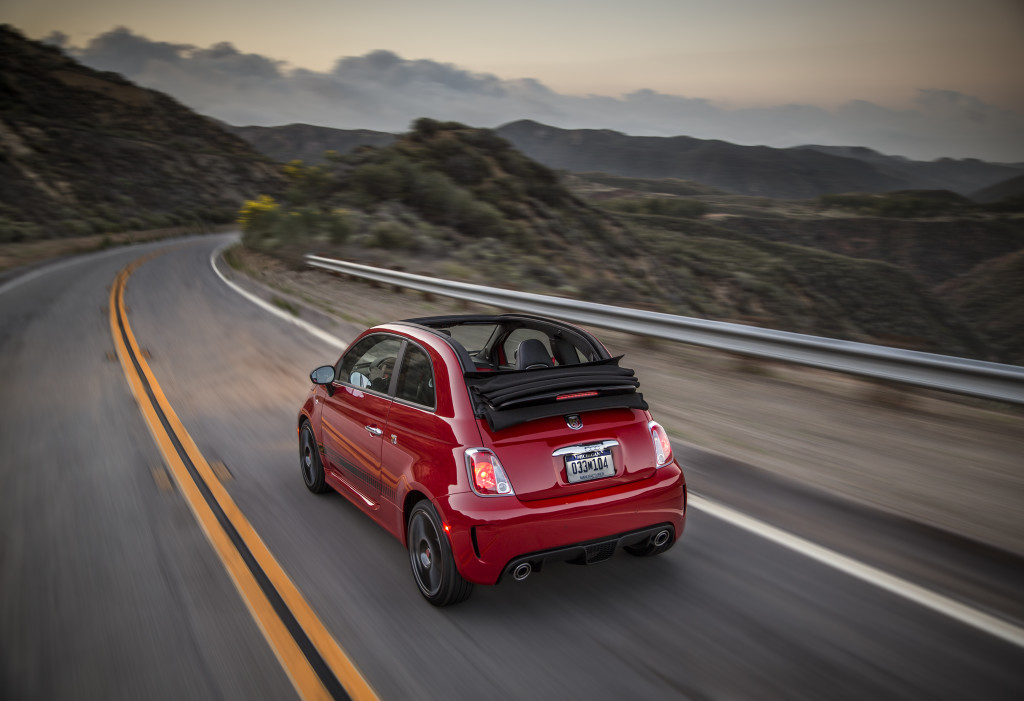 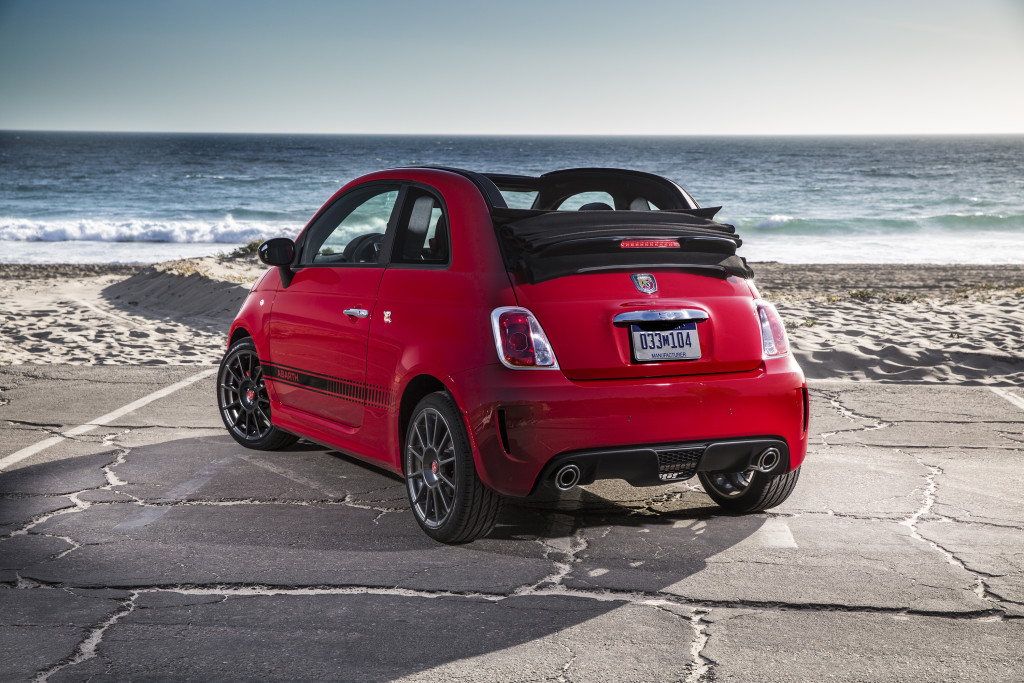 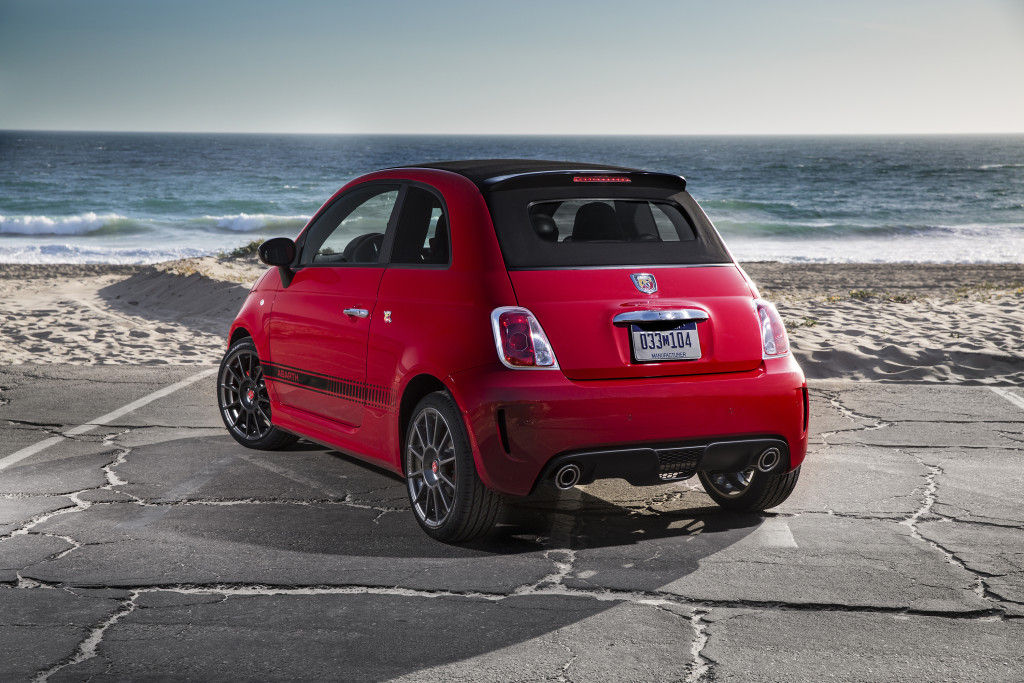 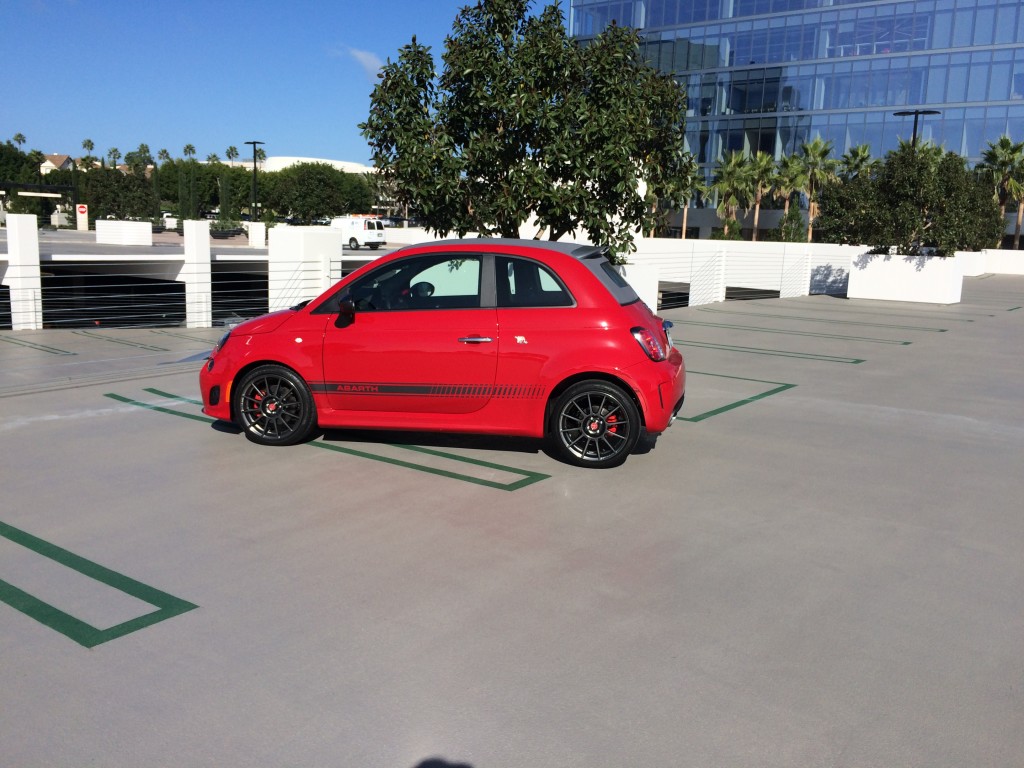 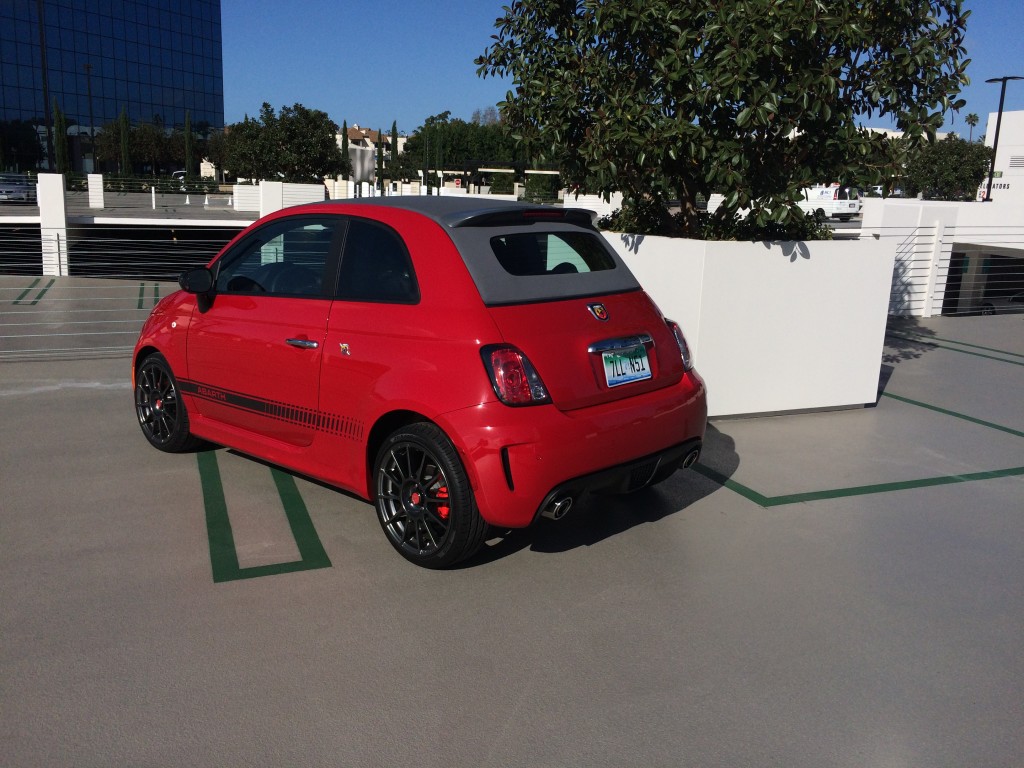 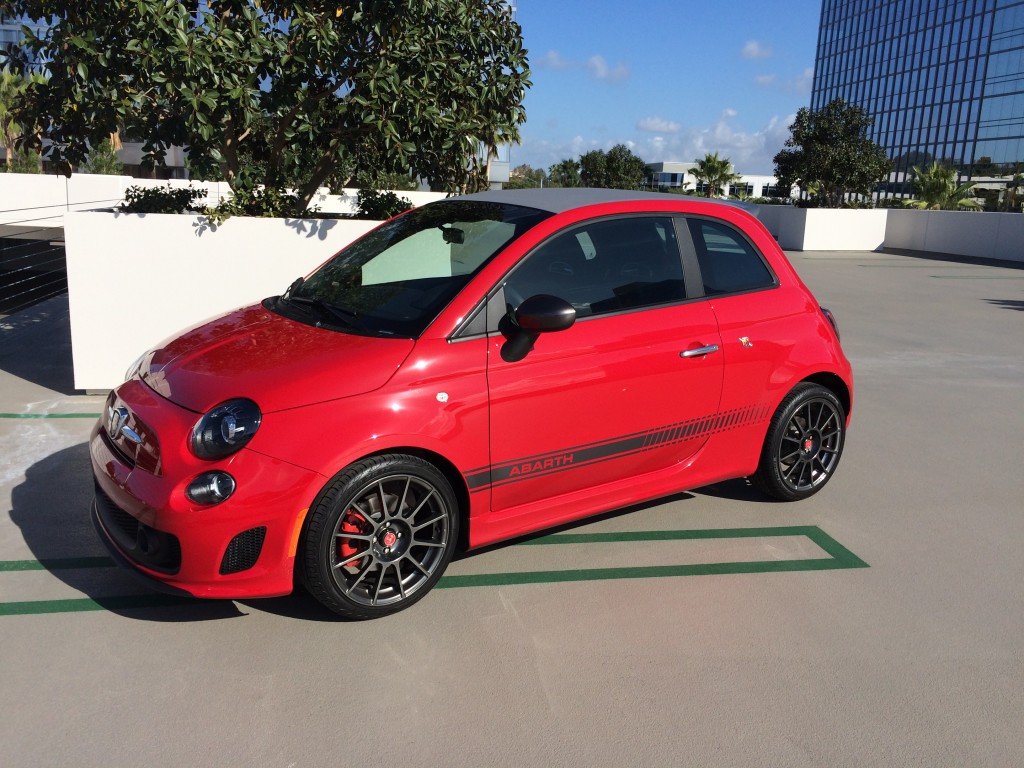 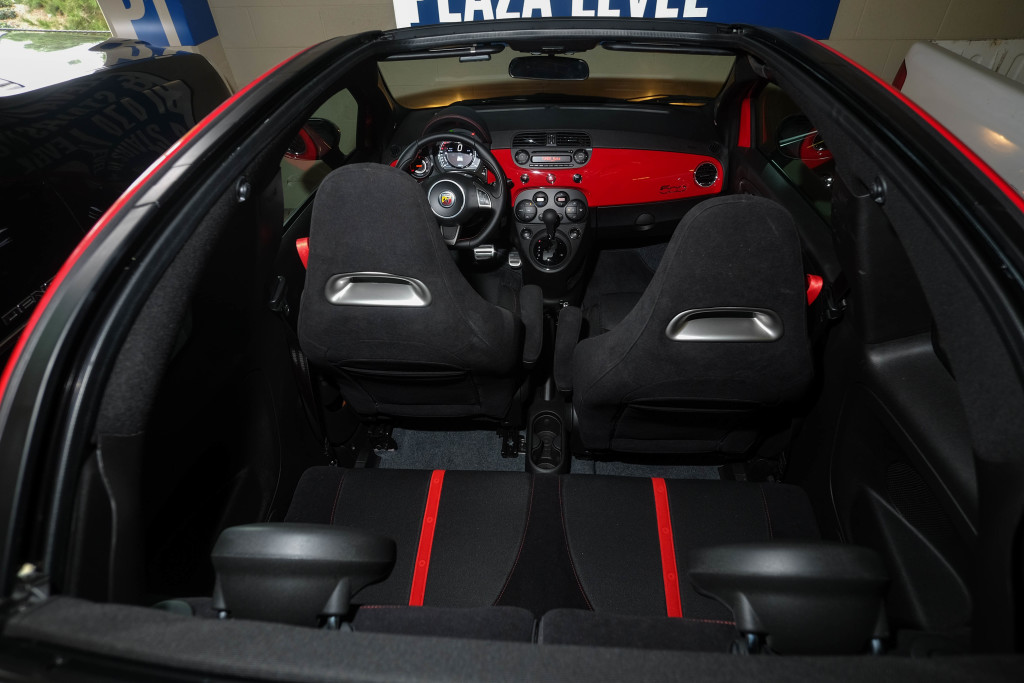 We love manuals and we got a chance to drive the 5 speed Abarth back in 2012 and we liked it except for the fact that it only had a 5 speed, which left it wanting on freeways. Enter the heavy duty Aisin six-speed automatic which adds $1350 to the cost, but works great with the little 1.4-liter turbo engine. It is, however, tuned a little differently in the automatic version. Power is down 3 horsepower to 157 but torque jumps up by 13 lb-ft to 183. This makes for much smoother progress and better power delivery overall.

In order to get some good acceleration runs we turned off the traction control and experimented with different launches until we posted a 0-60 mph time of 7.2 seconds. That’s not too bad but it’s a tad slower than the more powerful Fiesta ST which managed it in 7.0 flat.

Of course the Fiesta doesn’t have what the Abarth has…..one of the most menacing exhaust sounds of any small car we have ever driven. There’s no way a teenager would be able to sneak into his driveway in this car. On start up it sounds like a cross between a motor boat and an army of leaf blowers and it surprised me every time I did….so loud.  I expected to get a cease and desist letter from the neighbors at any moment.

The upside to this car being a soft top is being able to peel back the canvas roof, something I did every morning to go to the office. What that does is grin inducing, it makes it even louder to the driver and you get a taste of what the frightened pedestrians get to hear. However, having pressed the roof button there is still one that is more important, SPORT, press that and the exhaust adds another aural delight, one that you often don’t know when it is going to happen. Mash your foot into the carpet from standstill and on the upshift to 2nd the exhaust  and pops and cracks like a whip, keep your foot down and the brrrap brap noises continue until the next gear is chosen and the symphony continues. Around town the noises are addictive and there’s no need to drive fast to enjoy the snaps, farts and burbles.

On every commute I took the non freeway route, which took a little longer but was giggle inducing every time. The little Abarth ducks and dives in and out of traffic, snorts at other drivers, rev-matches its downshifts holds the gears in the corners, is a complete hooligan and I loved it. I always had it in Sports mode and never listened to the radio, partly because I couldn’t hear it but mostly because the exhaust note is so addictive. Brakes are strong and have no problem stopping the car pretty quickly and during hard driving we didn’t experience ant fade. Steering weights up and some effort is required in tight bends but the system works well and is good for forearm development.

The little fiat has a few faults, the biggest one is the short legs, long arms driving position due to the lack of a telescoping wheel. This wouldn’t be too much of a problem except the steering weights up in the corners and being too far away provides less leverage. Our test car came with a lot of options that bumped the price up, including a Beats Premium Audi System, Comfortable Nero Sports Seats and some very nice but expensive ($1,400) 17 inch Forged Aluminum Hyper Black Wheels.

The interior is well screwed together and even with the roof down the body remains rigid due to the fact that the roof peels back but the A, B and C pillars remain in place.

The other thing we would like to see is shift paddles instead of making shifts via the traditional gear shifter. Small quibbles but things that would make this even more fun.

This little car has soul and unlike the Mini Cooper is a small car. It was a hoot to drive for a week and cruising around it’s pretty civilized, but press that SPORT button and you unleash it’s inner hooligan and it becomes  a boat load of fun. I don’t know how they got away with that sound, it seems to be bordering on illegal, but whatever they did you feel like you are driving a mini Ferrari.