“Did you bring a spare set of tires” was the question I asked the driver who delivered the 2015 Dodge Challenger R/T Scat Pack. He grinned and shook his head. I asked that question because I knew the Challenger would have traction issues when I saw it was only wearing 245 tires on the rear. More on that later…..The Challenger is a huge car and outweighs some trucks, but when you put the 2nd most powerful engine that Dodge has in it you better get ready to start smoking.

The 2015 Dodge Challenger R/T Scat Pack, is certainly a beast, mainly because it shares its naturally aspirated, 392-cubic-inch  V-8 (6.4 liter) with the more high tech and more expensive SRT 392 model. We asked for a manual but ended up with the eight-speed paddle-shifted TorqueFlite automatic. The automatic version, it turns out, is actually great fun to drive and positively grin inducing . In addition to the enormous engine you get an active exhaust, black stripes on the trunk, and excellent Brembo brakes. You only miss out on SRT’s adjustable suspension, and it’s badges. That’s the good part because with only an R/T badge on the grille and the 6.4L badge on the sides it’s hard to tell this from the standard v8 at a glance. ……and that’s where the fun starts.

At the heart of the beast is the HEMI V8 that sits upfront and produces 485 hp @ 6000 rpm and 475 lb-ft @ 4200 rpm. It helps push this massive automobile to sixty in 4.5 seconds, or at least that’s the best we could coax out of it. In Sport mode and traction control off a mere millimeter of gas pedal will surge the car forward, too much and the tires spin until at last 3rd. The 8 speed swaps cogs super fast, does a very good impression of a dual clutch and it’s mated perfectly with this engine.  Once you get traction the car is properly quick with 50- 70 mph dispatched in 1.87 secs, plenty quick enough to pass cars when presented with a short broken line on a 2 lane highway. 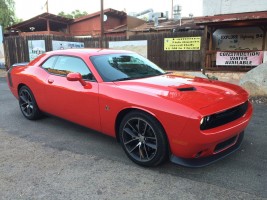 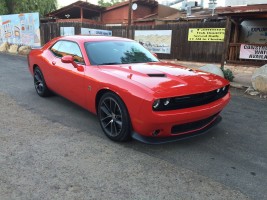 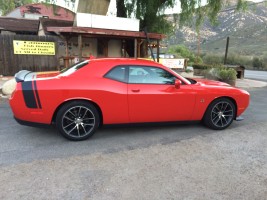 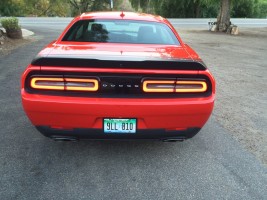 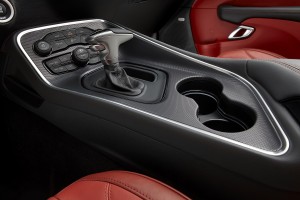 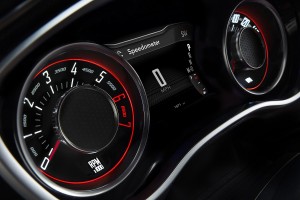 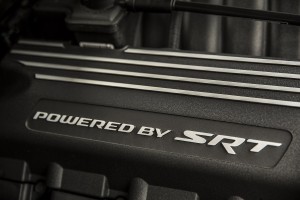 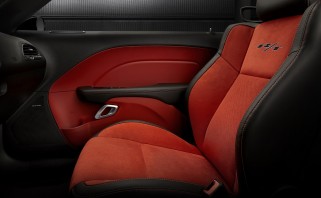 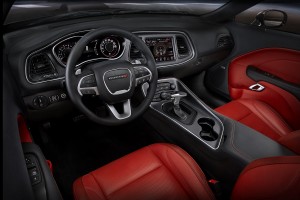 What Is Scat Pack?

In 1968, Chrysler Corporation began an ad campaign featuring a cartoon bee with an engine on its back featuring models called the “Scat Pack”. The Coronet R/T, Super Bee, Dart GTS, and Charger R/T received bumble-bee stripes (two thin stripes framing two thick stripes). The stripes were standard on the R/Ts and came in red, white, or black, but could be deleted at no extra cost. In order for a car to enter the Scat Pack it had to be capable of running the quarter mile in the 14s (14.99 or faster). In 2013 Dodge announced the reintroduced the Scat Pack as optional kits for the 2014 Dodge Challenger, Charger, and Dart, in order to mark the 45th anniversary of the original Scat Pack.

I have to drive past a school every day and if I leave work early enough, school is just finishing and the kids are wandering around not paying attention, waiting to be picked up. If they hear me I get pointed at and jaws drop in disbelief. It’s hard not to hear the booming exhaust note , or the sheer size of the beast, or its menacing black-on-black paint job. But when they saw this car, it got their attention.

It’s important to remember that this R/T Scat Pack is no Challenger Hellcat, however, it really doesn’t need any more power. Think BRZ or FRS, rear wheel drive with skinny tires. The Challenger’s aren’t exactly skinny, ours was running 245’s for a reason, spinning and grinning. Turn on Sport mode which by default, turns the traction control to Sport mode as well, meaning much tire slip and noise. Sideways is easily possible and easily controllable at lower speeds and once the gets going it does a pretty good job of controlling its girth on the twisty bits. Steering is direct and with 2.5 turns to lock you can hustle this huge car pretty well. Push too hard into a corner though and it will under steer, but nothing that a dab of throttle won’t correct. The ride is on the hard side but it’s a small price to pay to keep the car controlled. The big Brembos upfront are excellent stoppers and were completely fade free even during harsh testing.

Since the last time I drove a Challenger, the interior has been much improved. Gone is the Dodge Ram truck dash to be replaced with a smooth car-like one, with controls and infotainment system angled towards the driver. We like. Seats are comfortable and hold you in place well and are cloth, true to the car’s blue collar roots. Chrysler’s UConnect infotainment system works great and is better than many other car brands. Bluetooth set up is simple and for the most part the touch screen is simple to use. I really liked the old school speedometer and overall driving position except the gas pedal has a very long travel so getting situated ideally was a bit of a fumble.

The Challenger impressed us with its brute force, bad-ass attitude, and ear-splitting  exhaust note. The Scat Pack is seriously loud, all the time.  There’s no way to creep home in the early hours without waking up the parents. This is car is so much fun it seems illegal, which in the eyes of the law it may well be, as we spent most of our time exceeding posted speed limits. As is usual the car was dropped off with a full tank of gas, which didn’t last very long. we averaged 14.5 in the week we had it, but if you ant fuel economy go buy a Prius.

If you buy one of these, then wheelspin will be part of your life, but that’s not a bad thing if you don’t care what other people think. Having driven both the 5.7 liter V8 and 6 cylinder versions a couple of years ago and coming away less than thrilled, this was a car I didn’t expect to like, but oh boy was I wrong…..I loved it.