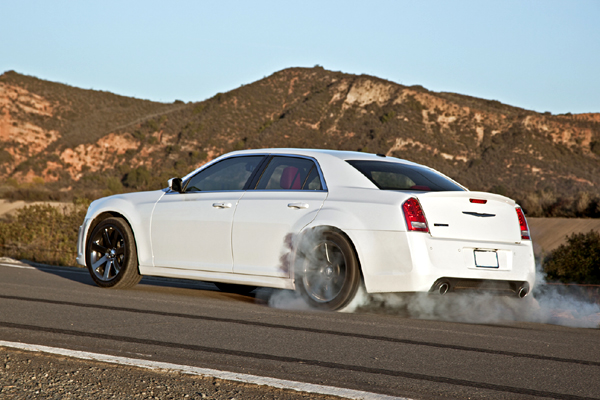 Right after we had finished testing the 300S last week, someone handed us the keys to a 2014 Chrysler 300 SRT and we couldn’t help ourselves. I had driven the SRT version in the Charger last year and came away impressed with the engine but not the car, it just felt dark and dingy inside.

FCA (Fiat Chrysler Auto) is rearranging things and making Dodge the sporting brand and Chrysler the more sane brand. This means that the 300 SRT is going bye bye and we are sad, as we really like it.

The best thing about this car, other than the fantastic engine, is it looks like the regular run of the mill 300 that we drove earlier and for this reason is something of a sleeper. Under the hood is a 6.4-liter V-8 under the hood making 470 hp and 470 lb-ft of torque. Unfortunately it is saddled with the old 5 speed auto and not the delightfully smooth new 8 speeder. Not that it really matters in this car with so much torque available pretty much any time, but the new transmission might have shaved a 10th of the 0-60 time. That said the 300SRT scorched to 60 in a scant 4.1 seconds and onto the 1/4 mile in 12.6. Impressive.
With enough room it will eventually reach 175mph.

Pottering around town on a whiff of throttle, the 300 feels utterly docile and very comfortable, in fact, you wouldn’t know that this car is special at all until you give it a bootfull of gas. This is when it comes alive, especially in Sport mode.

One feature we did like is the three-mode suspension. The three modes available are Auto, Sport, and Track. Auto is the default mode, and automatically adjusts the suspension based on the road quality, which in the case of San Diego, is pretty poor. Sport  stiffens up the suspension, adds a bit of weight to the steering, and makes the ride a bit jiggly. Track is the most aggressive setting, and seems to remove traction control as we found out at one stop light. I applied generous amounts of throttle and the big rear wheels spun and there was a deeper and throatier growl from the exhausts.

Although it handles corners well, this is not a mountain curves carver, like say an Audi S3 or BMW M235i, instead it’s a big brash, boulevard bashing, blue collar bruiser. It feels pretty nailed down and it is really easy to pass license losing speeds if you are not careful.

Our tester had red leather, with faux Alcantara inserts, a bit of a cheat and not quite up to Audi standards, but very comfortable nonetheless. The Harmon Kardon sound system is great but some of the interior plastics are great quality and the fake carbon fiber doesn’t do the rest of the car justice.

“Imported From Detroit” is this car’s moniker and we love it. We would take this over the Charger equivalent any day. i it is such a shame it is going away because it does everything and more that is says on the packet. Farewell…….